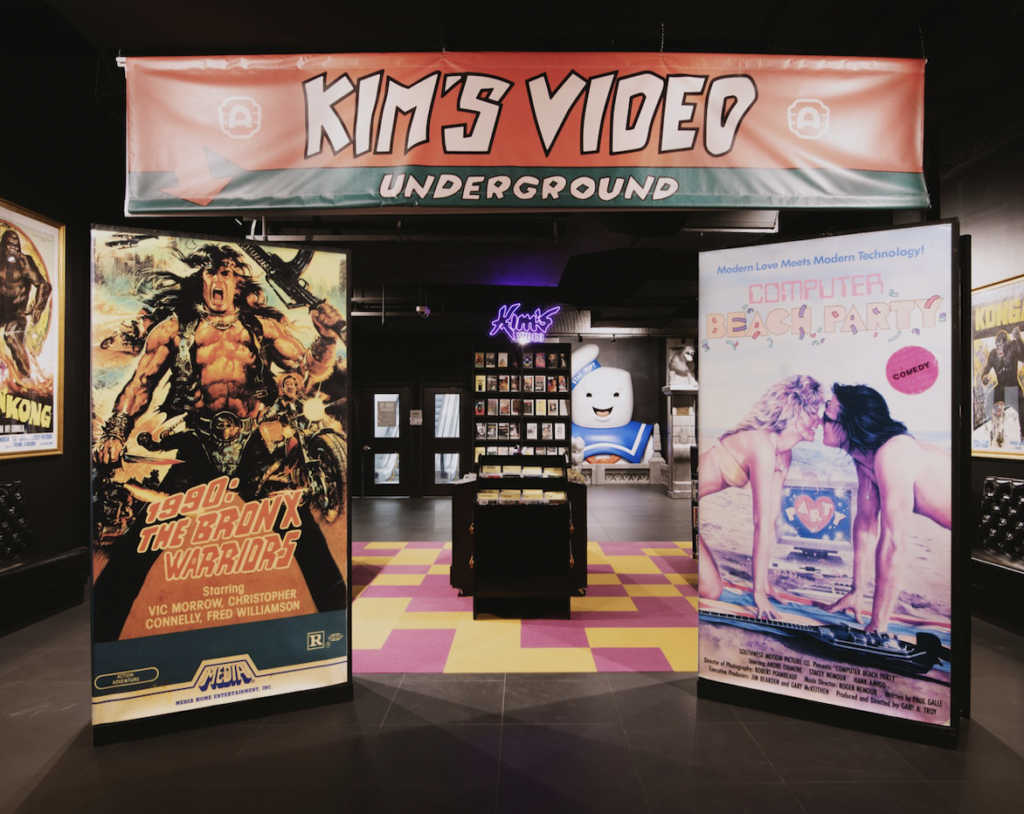 “We opened our first video store in Raleigh in 2018. As we were preparing that first effort, there was one collection we also wanted to save, the elusive, legendary white whale, Kim’s Video,” says Alamo Drafthouse founder and executive chairman Tim League. “It’s not just the DVDs and VHS, it’s the history, the personality and the curation infused into all the wonderful nooks and crannies of this collection. We are beyond honored to be the new steward of this legacy.”

From 1986 to 2012, film lovers from around the world would flock to the East Village to browse the legendarily diverse and esoteric catalog of Kim’s Video. The collection has close to 55,000 of the deepest cuts and the hardest-to-find selections – and many are not and may never be available on streaming platforms.

Founder Yongman Kim opened the first Kim’s Video out of a laundromat in 1986 and the collection quickly outgrew its space, expanding to four locations in the city, including the flagship Mondo Kim’s on St. Marks Place in 1995. Wishing to preserve years of devoted curation, in 2009 Mr. Kim took the only offer he had that would keep the collection together. The entire archive traveled 4,500 miles to Salemi, Italy, where it was preserved but largely unseen. After a twelve year and 9,000 mile odyssey, the Kim’s Video collection is now back where it belongs – in New York City.

“Like the collection itself, the journey of Kim’s Video is legend?ary and we are thrilled to celebrate its dramatic return to New York City where it belongs,” said Commissioner of the Mayor’s Office of Media and Entertainment, Anne del Castillo. “With a renowned passion for and commitment to cinema in all its forms — from B-movies to classics, from indies to blockbusters — Alamo Drafthouse Lower Manhattan is ?the ideal new home for this revered collection of films that has inspired generations of filmmakers and cultural influencers.”

In addition to free DVD and VHS rentals, Kim’s Video at Alamo Drafthouse includes VCRs and multi-region DVD players for rent, along with nostalgic Kim’s Video t-shirts and other merchandise for sale in the Alamo gift shop. The store itself features a rotating and ever-expanding selection of titles from the archive, with rarities from directors like John Waters, Jane Campion, and Takashi Miike, and lesser explored genres like “Roller Skating Classics,” “Monkey Business,” and “Nunsploitation.” The collection will also be featured on the big screen as part of a monthly Kim’s Video Presents screening series at Alamo Drafthouse Lower Manhattan, curated by Nick Prueher of the Found Footage Festival (and longtime Kim’s Video member!).

About Alamo Drafthouse
Alamo Drafthouse Cinema was founded in 1997 as a single-screen mom and pop repertory theater in Austin, TX. Twenty-five years later, with 36 locations and counting, Alamo Drafthouse has been called “the best theater in America” by Entertainment Weekly and “the best theater in the world” by Wired. Alamo Drafthouse has built a reputation as a movie lover’s oasis not only by combining food and drink service with the movie-going experience, but also introducing unique programming and high-profile, star-studded special events. Alamo Drafthouse created Fantastic Fest, a world-renowned film festival dubbed “The Geek Telluride” by Variety. Fantastic Fest showcases eight days of genre cinema from independents, international filmmakers, and major Hollywood studios. Alamo Drafthouse’s collectible art gallery, Mondo, offers breathtaking, original products featuring designs from world-famous artists based on licenses for popular TV and movie properties including Star Wars, Star Trek & Universal Monsters. Alamo Drafthouse continues to expand its brand in new and exciting ways, including the American Genre Film Archive, a non-profit film archive dedicated to preserving, restoring and sharing film, and Alamo On Demand, a new VOD platform boasting a growing and carefully curated library of entertainment for rental or purchase.

A modern-day cinephile-idiot, co-director David Redmon goes on a quest in New York City to rent a movie from Kim’s Video, a video rental store with more than 55,000 movies. Upon arriving at 6 St Marks Place in the East Village, however, he cannot locate his beloved Kim’s Video and subsequently learns the entire collection was sent to Sicily. David then sets off on a journey to rent a movie from Kim’s Video in Sicily.

Six years later, after finding the collection, locating the people who transferred it to Sicily, and negotiating with the town of Salemi, David mysteriously returns to NYC with the collection and, with help from Mr. Kim, contacts the Alamo Drafthouse to provide a new home for the 55,000 movies on DVD and VHS. What happened during those six years away?

Our Kim’s Video documentary plays as a heated-dream mystery as the directors seek out Kim’s unbelievable past, mesh it with an unstable present, and attempt to direct the movie collection’s unknown future.