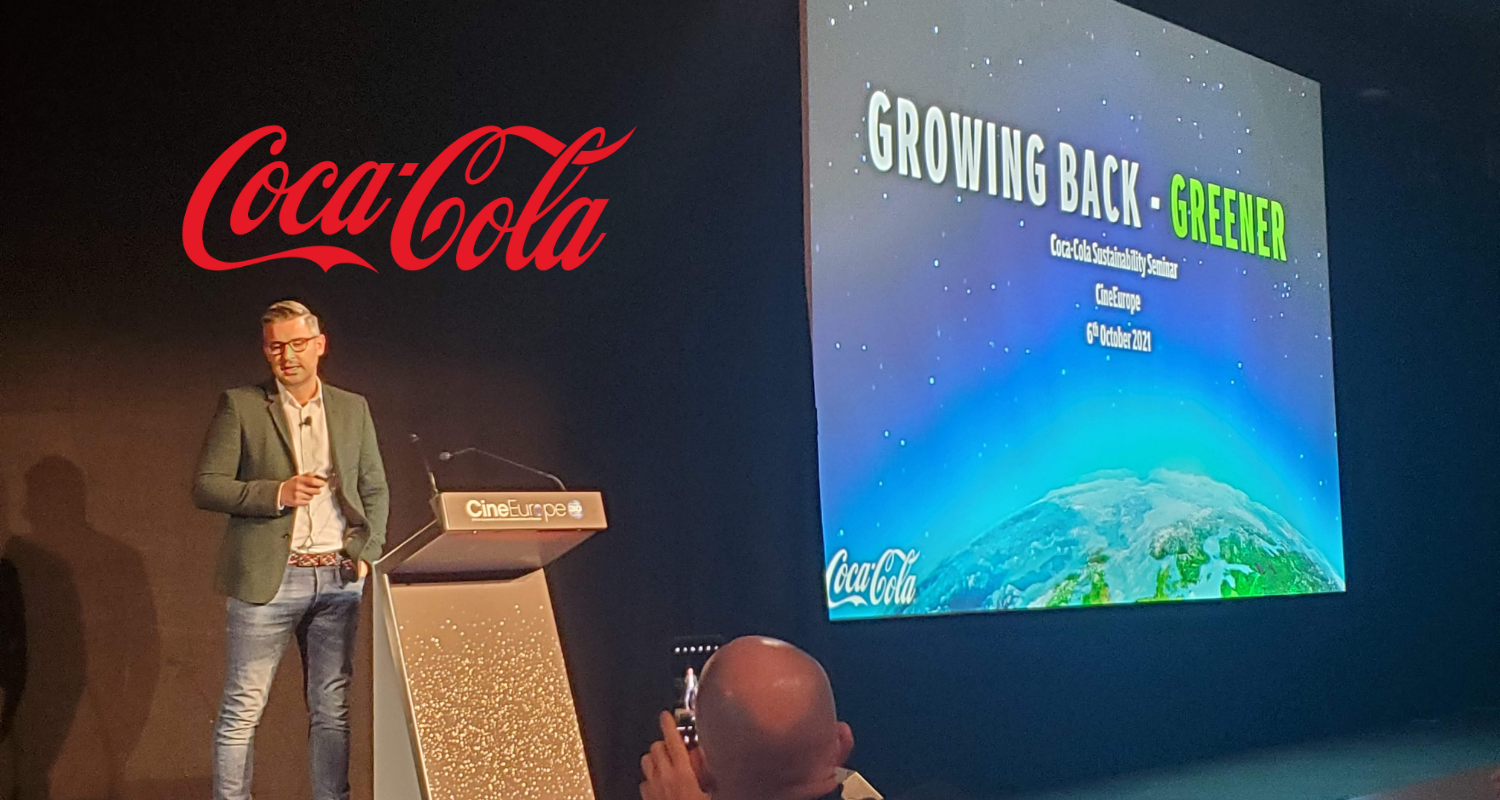 The ever-important topic of sustainability was, once again, given devoted focus at CineEurope 2021 during a Coca-Cola Company session titled, “Growing Back Greener”. Held three months ago in early October in Barcelona, the chosen topic – this time focusing specifically on the world’s problem with packaging – is an evergreen one (do excuse the pun).

We’re all aware by now of plastic packaging waste in different guises littering streets, countryside and waterways around the globe. And as the world’s biggest beverage company, the Coca-Cola Company recognises its responsibility to help solve this issue. The panel discussion was moderated by Coca-Cola’s own Oli Delaney (recently promoted – congrats Oli), then-European Away from Home Customers Director and Delaney was joined virtually by Ana Gascon, World Without Waste Director, Coca-Cola Europe for the opening segment of the session. Keep an eye out for Part Two of this write up, which will focus on the rest of the session.

Gascon delivered an update on Coca-Cola’s World Without Waste sustainability strategy, and as the name suggests this is applicable globally, not just to a specific region. Various challenges arise from this – different territories have ranging standards and methods of implementing their own environmental rules and regulations – but Coca-Cola wants to achieve and maintain the same standards internationally. Gascon pointed out that there’s little point in trying to only clean up one region because, as we all know, ocean pollution in particular doesn’t stay in one place. So one country’s problems are shared by the rest of the world, hence the necessary and regular emphasis on collaboration.

Gascon talked through an update of recent activity and future plans, internationally, for Coca-Cola, including the aim to reduce the use of virgin plastic derived from company packaging by 3 million metric tons over the next five years.

Then, Gascon took a look at the “pillars” of Coca-Cola’s overall World Without Waste strategy.

One ambitious target is the Design pillar – to design and create 100% of all packaging, globally-speaking, as recyclable by 2025. Europe, as a Coca-Cola territory, is already 93.4% of the way there, well en route to reaching the target in the next three years. And another design target is that by 2030, 50% of material entering the marketplace will be from recycled material, with the current figure standing at almost 30%.

The second pillar, Collect, is, by Gascon’s own admission, the most challenging of the three. This is simply down to logistics – by 2030 Coca-Cola is aiming to collect and recycle a bottle or can for every drink sold by the company. But because some territories around the world have inadequate or no collection infrastructure in place, this can pose a problem. So the current total stands at 66% achieved in this area so far.

But to combat this issue takes vision, innovation and, sometimes, possibly unexpected steps. One step to improve collection rates is that bins have been placed not only by Coca-Cola product sales points but by those of competitors, too, to ensure no packaging gets lost.

Again, to the C word and this time it isn’t COVID – hurrah! As is frequently espoused in a sustainability session, Collaboration – or in Coke’s case, Partner – is the key to success. Goals can’t be achieved without it and that’s not just collaboration with allies (think vendors and suppliers) but anyone else, including of course, competitors.

Several global partnership projects have been piloted together with local authorities and environmental NGOs. Zero Waste Cities (Greece), Mares Circulares (Barcelona, Spain) and the Ocean Cleanup, which Coca-Cola became the first global implementation partner of are some recent examples.

Gascon detailed how everything Coke is doing around eco-innovation is focused on driving the circularity needed to create and fuel a circular economy. The company is investigating and introducing more plant-based and recycled materials in order to lower their overall carbon footprint, 40% of which comes from packaging. An example of this circular approach is the closed loop system that is being developed to allow an old bottle to become another bottle. Problematic plastic colours that prevent this happening are being eliminated and the process is constantly being tweaked and improved.

Innovation is the Name of the Game

Of course, reducing the amount of plastic and other virgin materials used in the first place is the most desirable option. One such initiative is the soda syrup trial produced and tried by consumers at home in Germany that are then mixed with water, reducing the need for packaging. And with similar, plastic-reducing goals in mind, the company is looking into substituting cardboard for the wrapping around cans, bottle weight being made lighter and the percentage of refillables being increased.

An innovative paper bottle was unveiled in collaboration with Danish start-up Paboco in 2020, which was then trialled earlier in 2021 with an online retailer in Hungary in a big move from the lab to the market.

The Bottle of the Future

The segment from Gascon was rounded up with an overview of Coca-Cola’s “bottle of the future”, which would be made from 100% recycled or renewable resources. This bottle would incorporate 20-30% enhanced recycled or renewable materials, those that can’t be used for anything else – think marine plastic found on the beach.

This progress is dependent on developing the right technologies but the company has already made strides towards this with the company unveiling their marine plastics bottle in 2019 and their experimentation with other materials, such as the PlantBottle.

We’ll be looking at the following segment of the “Growing Back Greener” session in an upcoming CJ Green article so do check back for Part Two.

CJ Green is the sustainability feature for Celluloid Junkie. If you’d like to be part of the feature, wherever you are in the world, or you’d like to nominate another company in the cinema industry who are doing their bit for the environment, then please contact Helen Budge on helen.budge@celluloidjunkie.com