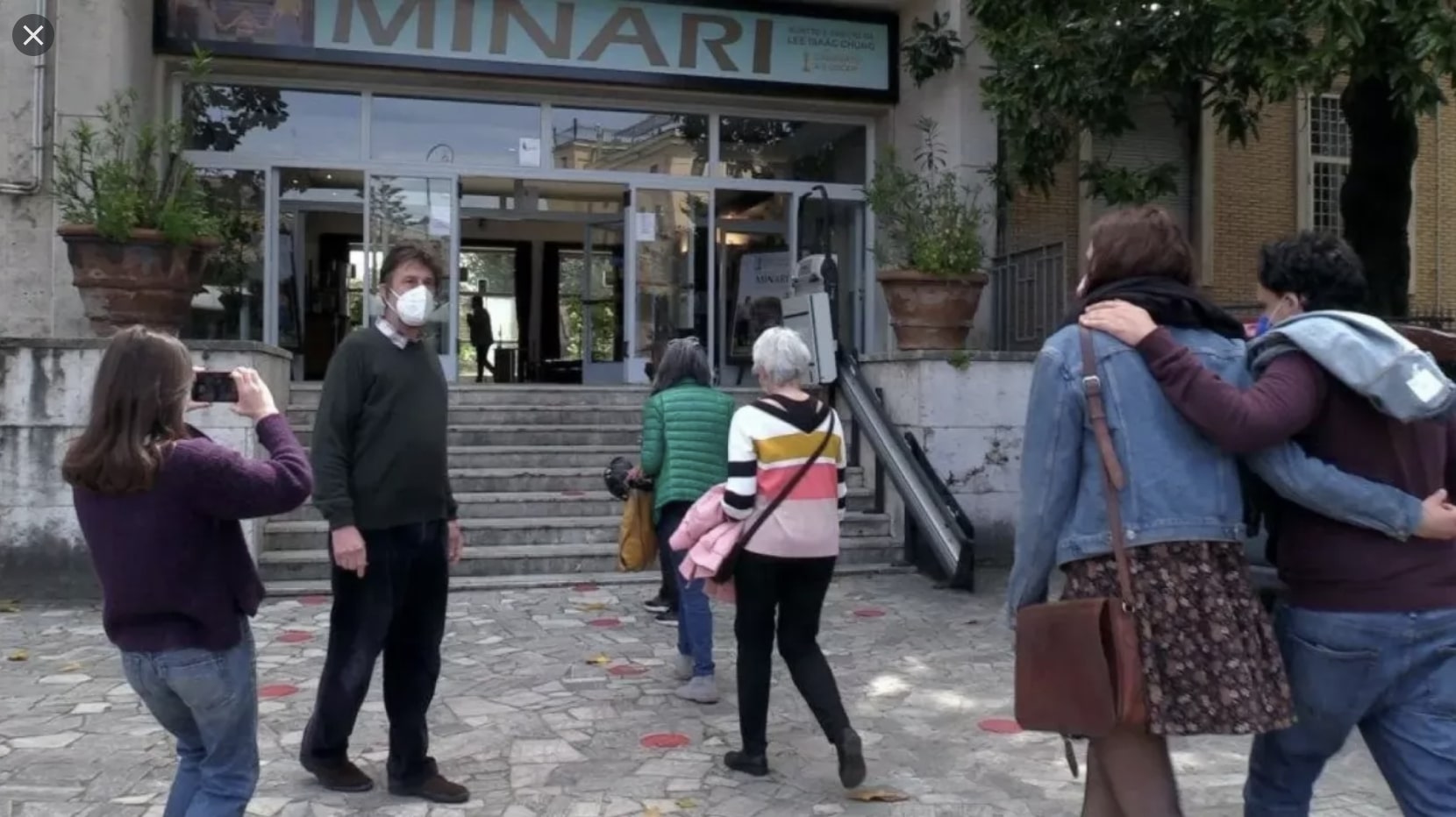 On 26th April 2021, Italian director Nanni Moretti had a special date: open the doors of his own cinema in Rome, the Nuovo Sacher, and greet the audience coming in after six months of darkness. Miles away through the north of the peninsula, in Milan, another cinema was the very first to reopen in Italy and Moretti here again was the protagonist: Cinema Beltrade opened at 6 am for a special screening of Moretti’s awarded movie “Caro Diario”. The show was sold out, with a long queue of people – young and agés – waiting for buying a ticket and being one of that 50% of the audience allowed in the auditorium.

Since that day, the Italian cinema industry has run its second reopening, after the last closing dated 26th October 2020, forced by the high numbers of Coronavirus contagions.

The restrictions are still strong: facemasks, seats limitation, concession bar not allowed, curfew at 10 pm, possibility to reopen only in low risk zones (yellow regions) and control of temperature before entering. Despite this, however, the first opening weekend (29th April – 2nd May) counted 460 screens and a box office of more than €600,000. Oscar winner “Nomadland” earned 67% of the total box office: after an encouraging debut of around €60,000 during the first day (29th April), its release on Disney+ on 30th April didn’t hold it back too much.

The engines are warming up and the infection curve is decreasing: at the moment, all signs are positive. Arthouse and city cinemas have been the principal beneficiaries of the first weeks of restart thanks to high quality movie titles as “Est-Dittatura last minute”, “Minari” and the 4K version of “In the mood for love” restored by the Cineteca of Bologna. The number of reopened screens should increase substantially in the last part of May with the reopening of the main cinema chains – The Space Cinema and UCI Cinemas -, along with other independent local exhibitors, while the multiplex sites of Anteo Cinema, Notorious Cinema and Circuito Cinema are already operating.

A whole sequence of facts and actions such as these has not been seen for some time in Italy and a couple of weeks in a bit of everything has happened: on 3rd May, the restart frenzy was cooled by a news that has caused irritation amongst Italian exhibitors. The Minister of Culture announced the signing of the decree to redefines the theatrical release obligation for Italian films by allowing a window of 30 days for streaming and television release from the date of first cinema release (previously the window was of 105 days). According to the Ministry’s statement, this reduction has been decided to satisfy “the need to help cinemas in the restart phase of their activities and the need to rebalance the rules to prevent Italian cinema from being penalized.” The Italian Cinema Exhibitor Association (ANEC) raised its voice immediately: in a very delicate moment as the one cinemas are facing (not only in Italy, but all over the world), is it really believed that the urgency to help them is through a reduction to 30-days windows? The Unione Esercenti Cinematografici Italiani (UECI) underlined that this cutting could mean 60% less of audience in the future and difficulties for exhibitors to access financial incentives for Italian contents screenings.

Only one day later, on 4th May, the Giornate Professionali di Cinema convention started online. In 2020, the two major industry meetings in Italy were canceled due to the pandemic – Cinè in Riccione and Giornate Professionali in Sorrento – so this has been the first occasion to be all together and set up the “Return to the movies”, waiting to see each other in person in Riccione in July 2021 (event confirmed for its 10th edition on 20th-23th July).

With an average of more than 1500 professionals connected, the event started with the Studios presentations of the coming movies line up: major Italian distributors Medusa and 01 Distribution/RaiCinema offered an interesting slate for the reopening including Oscar winner title “Another round” and awarded director Gabriele Salvatores’s new movie “Comedians”. Vision Distribution (a partner company founded by Sky and a bundle of Italian producers) also presented twenty coming movies – never so many – from May to December, starting with the last Woody Allen’s work, “Rifkin’s Festival”. International Studios as Warner Bros. and Universal unveiled the line up for Italy until the end of summer with strong releases in the month of August as “The Croods 2”, “Fast & Furious 9 – The Fast Saga”, “The Suicide Squad” and “Me contro Te – Il mistero della scuola incantata”, starring a couple of young YouTubers catapulted to the cinema for the second time thanks to the huge box office result of their first movie. Disney announced release dates for “Cruella” and “Black Widow”, with the confirmation of the contemporary release on the big screen and on Disney+ for both of them.

The coexistence with streaming platforms was one of the hot topics of the institutional conference following the presentation of the Studios: if Francesca Cima (President of the Cinema and Audiovisual Producers) underlined that the streaming is a good ally for the market optimization, with a diversification of products for cinemas and platforms, in order to maximize the incomes for every release, Phil Clapp (Chief Executive UK Cinema Association and President of UNIC) also recalled that cinemas and streaming must not be seen in opposition, but complementary, mentioning researches that clearly showed that those who want to return to the cinema are also those who have consumed the most films during the lockdown.

Although even the Italian exhibitors are aware of the changing times that all the global industry is living through, their request is to sit down at a discussion table so that no one is penalized: only few days before, an emblematic case that generated not a little disappointment was that of the release of the new film starring the popular actor Carlo Verdone in just three cinemas managed by the same film producer. The film had been sitting on the proverbial shelf for over a year and the release continuously postponed pending the reopening of cinemas with various proclamations in favor of the big screen, but the limited release has gone quietly and the movie will be released on Amazon Prime Video from 13th May.

The Ministry of Culture, Dario Franceschini, intervened during the conference, has made himself available by inviting everyone (producers, distributors, exhibitors) to draw up a shared agreement to be translated into a ministerial law, an agreement which, however, must take into account one goal: to broaden the audience, thus including platforms as opportunities.

Waiting to understand what developments will be on this issue and to see the restrictions eased, mainly regarding the curfew and the sale of concessions, the industry restart will be boosted by a series of special events and promotional campaigns: the first one will be arriving strongly from the David di Donatello Awards – the main award for the Italian Cinema. The ceremony will be broadcasted live on 11th May on Rai TV with the purpose to bring the magic of the cinema into the homes of Italians. Then, the promotional project #SoloAlCinema will see its maximum expression in the special “Le notti bianche del cinema”, a great midsummer cultural event that will involve several cities around Italy, with 48 hours of non-stop screenings, previews, and meetings with talents with a single discounted entrance ticket.

All that remains is to step on the accelerator: as Laura Houlgatte (CEO of UNIC) reminded during the convention, Italy is one of the first countries to reopen in Europe after a long closing and France and UK will follow very soon. So, now it’s time to play as a unique team because the cinema has the power to heal souls and to share positive emotions, to improve our perception of the world and our will to live.