To say that 2020 has been a bad year for cinema operators and theatrical film distributors would be quite the understatement. With COVID-19 shuttering most of the world’s movie theaters, global box office is down well over 70% from last year and as cinemas reopen, it is uncertain whether audiences will comfortable returning in sufficient numbers.

The Film Expo Group knows a thing or two about having bad years. The company’s annus horribilis dates back to November of 2019 and, like the coronavirus pandemic, it began in China. Now the company is looking to take control of their fate with their annual ShowEast conference, which this year has been moved from October to December 7-10. In the process, they are hoping to rally the cinema industry toward a future year that is sure to be brighter than 2020.

ShowEast is set to be the first international cinema industry trade show in over year. In fact, since the last ShowEast in October of 2019. That’s because on the run up to last year’s CineAsia, the political protests taking place in Hong Kong, where the conference was scheduled to be held in December, took a violent turn. On November 14th, FEG made the difficult decision to call off the event. At the time, Robert Sunshine, the company’s chairman, explained the reason for canceling CineAsia, “We could not provide safety for our guests and received many comments that companies were concerned about sending their employees to Hong Kong at this time.”

Canceling a major trade show like CineAsia so late in the game seemed like a freak occurrence at the time; the kind of situation that might happen once in a lifetime. Nobody would have predicted that just four months later, the industry’s largest conference, CinemaCon in Las Vegas, would also be cancelled weeks before it was to be held due to the growing Coronavirus pandemic. Then, with 96% of all movie theatres around the globe closed, FEG was forced to sustain another blow when their CineEurope convention in Barcelona was postponed from June to the first week of August before ultimately being held virtually on June 17th and 18th. That marked the third straight international in-person cinema trade show to be called off; two of which are organized by FEG.

Aside from regional conferences in various parts of the world, the next major convention on the annual trade show schedule was to have been NATO’s Fall Summit and FEG’s ShowEast, which had both been set for the October time frame. Having weathered two back-to-back cancellations, FEG decided to be proactive about both its upcoming ShowEast and CineAsia. The company was planning to hold the latter in Bangkok this December.

Instead, on July 15th, FEG announced that they would forego an in-person CineAsia this year and instead move ShowEast into its December 7th through 10th time frame. The event is currently scheduled to take place over four days at the Loews Miami Beach. 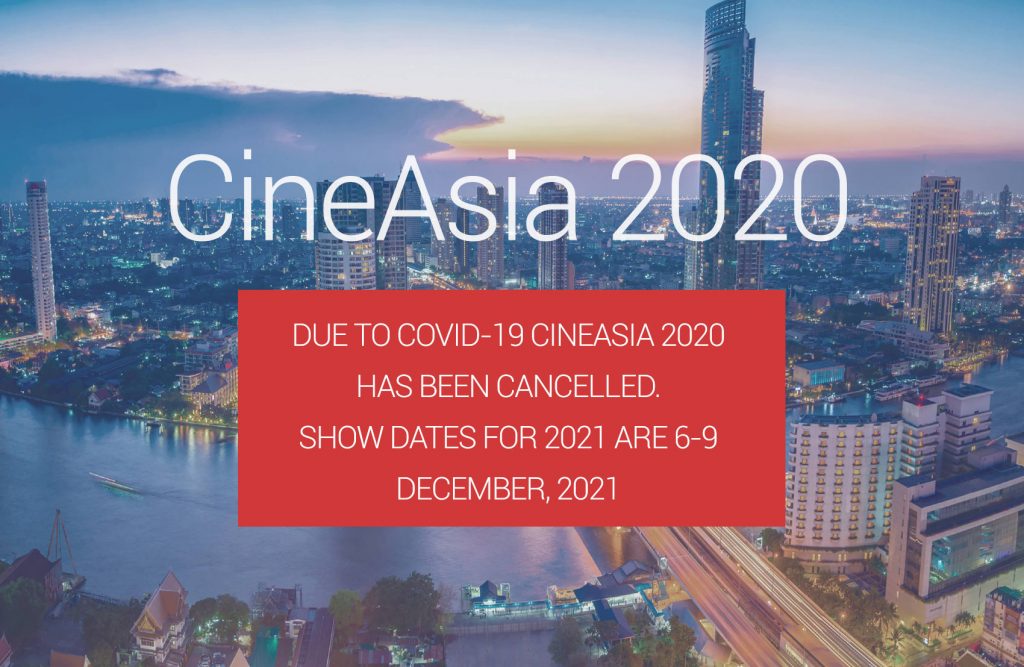 CineAsia 2020 will be held virtually.

As happens each time one of the industry trade shows gets postponed, cancelled or moved online, we fielded a number of phone calls and emails here at CJ asking us what is “really going on” or seeking our thoughts on the matter. We had already revised our travel plans to head to Miami December, and said as much. But we also picked up the phone and called Andrew Sunshine, President of the Film Expo Group, who was kind enough to fill us in on the thought that went into some of the decision making.

Naturally many industry professionals in the Asia Pacific region were disappointed that CineAsia would not be happening this year. When we spoke with Sunshine in mid-July he said plans were in the works for doing a virtual CineAsia sometime in October. Since then, FEG has announced an online version of CineAsia will take place October 21st and 22nd, expanding on what the company has learned about virtual events from CineEurope.

Yet one of the main reasonings for pushing ShowEast back to December, in a one-off for this year, was with the intention of getting at least one conference off the ground in 2020. “We’re really trying to be able to have ShowEast bring our industry together,” said Sunshine. “By moving ShowEast from October to December, it’s buying us two months. Two months to hope that the U.S. gets things together, that restrictions on travel within the U.S. start to subside, theatres can potential get open and product will get out.”

It looks like Sunshine might get his wish on that last point, for cinemas began reopening in earnest over the past week or two and though Disney’s “Mulan” might be headed straight to streaming, Warner Bros. will be releasing Christopher Nolan’s eagerly anticipated film “Tenet” over the course of late August and September.

“Faced with which show we wanted to try and keep going, our decision was to try and make ShowEast happen,” Sunshine said of FEG’s Solomonic choice. “There was a better chance that people could travel here domestically than overseas. It wasn’t an easy decision to make but we made the decision after speaking with lots of different people and its met with a good reception. People thanked us for making the move.”

ShowEast has traditionally been a convention heavily attended by Latin American exhibitors, given Miami’s proximity to the region. Asked whether he was concerned that delegates from Latin America may not attend, Sunshine stated, “I think we have a better chance of getting them to come up in December than if we were to run the show in October. That was one of the reasons we ultimately made the decision. That goes for studios flying in from California too.”

But FEG is also trying to be realistic. The company doesn’t want ShowEast to become what has this year been dubbed a “superspreading event” – one in which the oronavirus gets passed around between attendees that ordinarily might never come into contact with one another. “We’re only running the show if its safe,” Sunshine was adamant. “If it’s allowed to be run and if we’re able to run it so that we can bring people together in the proper way. We are committed to running ShowEast this year one way or the other as long as we are able to. We’re keeping our fingers crossed that we’ll have a show in December.”

Latest posts by J. Sperling Reich (see all)
Send this to a friend
This website or its third-party tools use cookies, which are necessary to its functioning and required to achieve the purposes illustrated in the cookie policy. By closing this banner, scrolling this page, clicking a link or continuing to browse otherwise, you agree to the use of cookies.OK