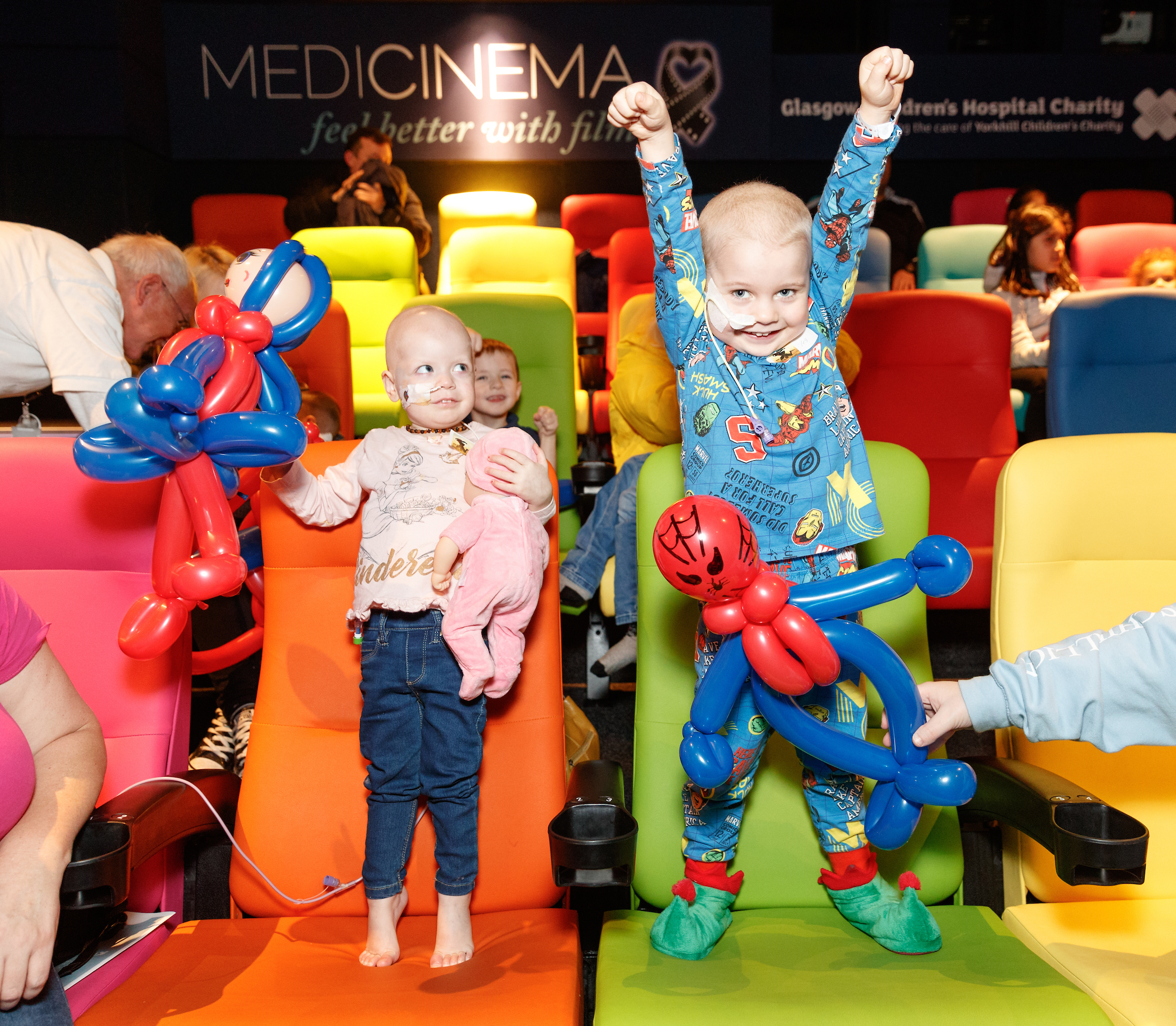 During a long stint in hospital, patients – and their families/carers – often have no respite or distractions from their (often serious) illnesses or upcoming treatment. UK charity MediCinema aimed to change exactly this when it was founded in 1999 by Christine Hill MBE. Working with the UK’s National Health Service (NHS) it began providing state-of-the-art cinemas to hospitals around the country.

The “going to the movies” experience not only helps to lift spirits, through the feelgood factor, but it provides much-needed escapism to vulnerable – and often very young – viewers. Different worlds await them where superheroes, wizards and magical beings roam free. And a couple of hours sharing the magic of cinema with others in a similar personal situation, can completely alter an entire hospital experience.

Since 1999, MediCinema have brought over 188,000 cinema experiences to patients and their cutting edge facilities – they build, instal and manage their cinemas from start to finish – allow plenty of space for beds, equipment and wheelchairs to be comfortably accommodated. In this way no physical barriers prevent patients with any constant medical needs from attending an often transformative screening of “Shaun the Sheep” or the latest Minions film.

The first (of currently six) MediCinemas was opened at St Thomas’ Hospital, Central London. Two others in London are housed at Guy’s Hospital, Southwark and Chelsea & Westminster Hospital, with a fourth at Newcastle-upon-Tyne’s Royal Victoria Infirmary. The final two sites are at the Southern General Hospital in Glasgow, Scotland, and Serennu Children’s Centre, Newport, South Wales.

In a recently conducted survey, MediCinema got incredible feedback from users of their service. 99% of attendees said that MediCinema had a positive impact on their hospital experience. 93% agreed that it helped to reduce their feeling of isolation and 92% said their feelings of stress and anxiety were lessened.

And appreciation of MediCinema is far-reaching. Actors Simon Pegg, Emma Thompson, Stephen Graham, Tom Hiddleston and George Mackay (“1917”) have all filmed messages for the charity, leading to a rise in much-needed donations from all over the world.

Sadly, the global pandemic has, of course, significantly impacted the work MediCinema do. Across the country, the whole frontline cinema team of six has been furloughed along with one member of staff from Head Office. A pared-down team of six have had to step up and cover all areas from fundraising to operations & communications and everything in between. As well as this, the remaining team members have accepted a salary reduction – but this hasn’t phased them and the determination to come out of this ordeal stronger than ever is clearly a driving force.

Before COVID-19 hit, the team had ambitious plans to reach more service users than ever. By 2025 the aim was to double the number of in-hospital sites and to reach triple the number of (annual) guests that can be accommodated for film screenings. But since mid-March, all cinema operations have been suspended and in-hospital screening services are not currently available. For an organisation based on donations and campaigning this has been a particularly devastating time (as the whole charity sector will tell you).

Of the effects of the pandemic Kat Mason, MediCinema’s CEO, commented, “There is no doubt that this has been an incredibly tough time for MediCinema and we are realistically looking at a drop in income of around £700,000 to the end of this year.”

Prior to the pandemic MediCinema’s main source of revenue came from public donations through cinema ticket purchases. In 2019 MediCinema received contributions totalling £328,000 from Vue Cinema admissions where customers donated directly at the Point of Sale (PoS) machines.

Their “Nationwide Preview Screenings” scheme (NPSs) was another incredibly successful initiative that raised over £338,000 since its inception. Through supportive partnerships with both distributors and exhibitors, preview screenings were held at participating cinemas around the country from which all ticket sales were donated to MediCinema.

But when the UK went into lockdown in March the team had to nimbly pivot to new, creative ways of bringing in funding. One such example is their recent partnership with Secret Cinema and Haagen Dazs at Goodwood Motor Circuit Drive-In Cinema from which they receive a portion of the profits from ice cream sales, as one of two charity partners.

Instead of resigning themselves to a period of redundancy while all screens across the country – and indeed much of the globe – went dark, the team started to put their efforts into other ways of bringing joy to those in hospitals.

Teaming up with Hospedia, a UK supplier of bedside screens, and non-theatrical distributors Filmbankmedia, patients were able to watch films from their bedside, for free. Theatrical distributors Disney, Warner Brothers, eOne, Sony, Paramount Pictures and Universal Pictures also got involved, meaning that inpatients could enjoy the escapist magic of films such as “The Lion King” (2019), “Toy Story 4” and “Pokémon: Detective Pikachu” at a time when all hospital visitations had to be suspended due to the risks of COVID-19.

And the initiative proved incredibly successful: 3,390 patients have watched over 10,900 hours of film content during the first twelve weeks of the channel being available. Mason said of the initiative, “Thanks to the support of our Board and from the film industry we were able to pivot quickly to our bedside screen service. And the success of this is enabling us to think more broadly about what our services might look like in the future.”

But the partnership has really shown its worth during the pandemic with creative outputs and projects that have been able to continue. Disney activity packs are being created and distributed to children in hospitals, relating to the film titles shown through the bedside screening channel: 6,450 activity packs, 3,200 arts & crafts kits, 3,700+ sticker sheets and craft guides and not forgetting the many numerous coloured pens.

Getting Back to Business

So how does the future look for MediCinema, in the new “normal”?

Working with vulnerable adults and children means that safety is of the utmost importance to the service they provide and they’re currently working closely with hospital partners on reopening plans. However, the return will have to be phased and won’t be able to happen overnight. It’s likely that the first step will initially be a return to personal screenings, something that MediCinema has done before if a patient’s personal circumstances require it.

A second phase might be based around socially distanced screenings with additional safety measures in place. Nothing will happen, though, without the full input and agreement of each hospital they work with. Mason said, “We of course want to re-open cinemas as soon as we can, but given the complexities involved we realise that this will entail a number of steps which could be different for each site.”

But judging by the reputation of this big hearted charity, we’d put money on there being a very warm reception when “normal” service resumes.

To make a donation towards the incredible work MediCinema do, please click here.