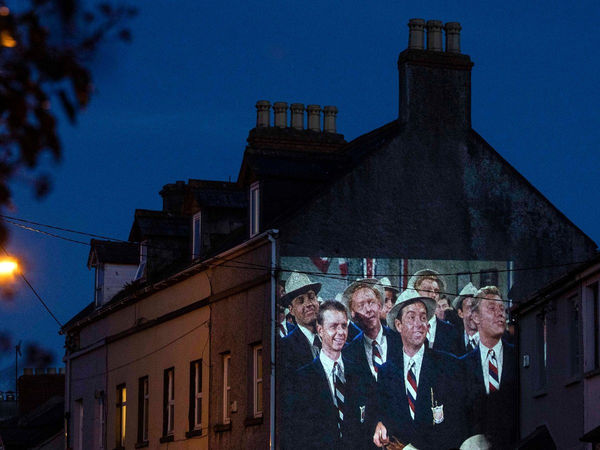 The Coronavirus pandemic has brought a surge of urban cinemas screening anywhere but the movie theatre. Homes around the world have been making outdoor home cinemas with a large screen and some chairs. Real cinemas are selling popcorn outside of their closed doors. The UK’s Luna Cinema, the ne plus ultra of outdoor screening companies, is confidently taking bookings for future events at glossy, historical locations.

Outdoor screenings bring a heightened atmosphere to stories that are already larger than life. Rarely has outdoor cinema been bettered than Scotland’s successful Cromarty Film Festival. Donald Coutts, a pivotal player at CFF, quips about screening outdoors in December. “We showed a film on the ferry. We show on the Lighthouse, the brewery, the stables and in the wee artisan coffee bar at the ferry slipway called The Slaughterhouse.” With 90% tickets sold each year, Cromarty is clearing doing something right by uniting cinema lovers with great outdoors and some canny lateral thinking.

Drive-ins are “in” and now they’re popping-up too in global locations. The latest, with help from Europe’s Hot Tub Cinema, is the Drive-in Movie Club of St. Louis, Missouri. Expected to start showing drive-in by August, it offers early birds a price of $25 a car.

In Colli Aniene in Rome, anonymous residents project cheery messages onto neighbouring buildings. In Toronto, u/CutieGremlin aka Dax Martin is playing Mario Kart on the side of a neighbourhood apartment block on 100 High Park Ave but some residents of that building haven’t really noticed that they not only quarantined in their flats due to a deadly virus, they’re now also now part of someone else’s retro computer game.

Getting through the #COVID__19 restrictions: #MovieNight at Windmill Road, #Cork, complete with #SocialDistancing. #StayHomeWatchAMovie @rtenews pic.twitter.com/uYNrMvMu78

The exterior of Frankfield Terrace, on Dublin’s Cork Street, has rousing cinematic entertainment courtesy of Scott Horgan. The theatre company manager knew the neighbourhood probably wasn’t particularly clued up about streaming services. One borrowed projector and a terrace house’s gable wall later, an outdoor screen was born. United by the laughs of “Gentlemen Prefer Blondes” and “Calamity Jane”, the community also collects monies for the local Age Concern.

Amazon rolled out trucks carrying giant double-sided LED screens to project films and series so they could be viewed from Madrid’s balconies. Screens measuring up to four metres will work with sound equipment to make viewing from multiple vantage points possible. So far only “strategic areas” in the city are served but it was a first run pilot of the episodic romance “Modern Love”, itself inspired by a New York Times column.

In Mexico City, there’s the Azotea Coyote. Created by the Autocinema Coyote and Cinema Tonalá, a first screening of Ana and Bruno, courtesy of Corazón Films, used the drive-in technique of transmitting the film’s audio on the radio to a rapt trapped audience. Called “living cinema”, residents around the city can nominate via email a rooftop or any large wall that shares a view to many for the scheme.

Informed by the Whatsapp group “Via Amendola 27”, Fabia Bettini and Gianluca Giannelli, Rome Film Fest sidebar Alice nella Città directors, project Italian or Hollywood classics onto a nearby house. Mario Cirillo, a neighbor, said, “The beauty and images that come from cinema, art and culture are like food – it may sound trivial – but they are like food for our souls. In times when we cannot be in direct contact with other people.” Although this movement started in Varese, the “festival” idea is spreading to the Philippines, Brazil, Vietnam as well as England, France, Switzerland and Bulgaria.

At the same time, in Cologne’s Belgian quarter, Ulli Kilberth organises a selection of classic films to be projected onto an empty house wall every Friday. “We asked ourselves how one could maintain a sense of community and cohesion among neighbours despite the current situation,” says the Cologne native. Observing the balconies below his own, he thought, “These could also be balconies like those found in theaters or operas”.

This is how badly we yearn for the big screen, popcorn-guzzling, group experience. “It won’t get shown on a bed sheet in Pakistan,” a production designer friend once said that about a film project that never did get a release. Showing films outdoors is not a slur. Rather it’s a badge of humanity’s never-ending craving for the never-ending story. We’ll watch it even if it’s on a bed sheet strung over a clothesline in any country you please. We’ll enjoy ourselves too.

My neighbour @scottduggan had the most beautiful idea to project classic movies for our terrace, listening to the movie on an FM signal sitting in our own separate front gardens made us all feel a little less alone 🙂 donations went to @AgeAction pic.twitter.com/8lhEnYW21l