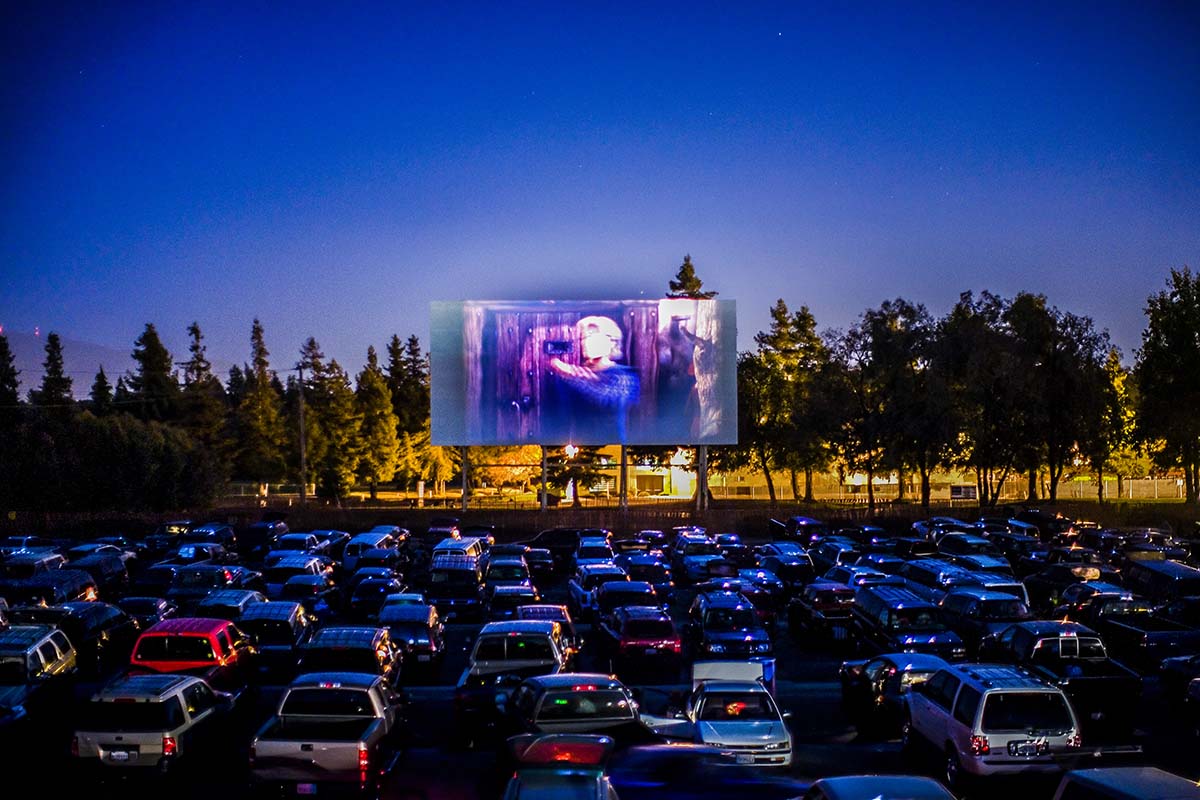 In these days of self-isolation, “vectoring” only with those you must, going out to the cinema is not an option – or is it? As the coronavirus closes multiplexes, movie theatres, outdoor screenings and specialist cinematic events in the west, the drive-in seems to be the last man standing in big screen entertainment.

“We gave it a tremendous amount of thought this weekend about even being open. We made changes. From the knowledge we have now, it is safe enough to open the drive-in if people stayed in their cars and maintained the social distancing everyone is talking about now.” That is Richard Boaz who, along with his wife Lisa, run The Monetta Drive-In Theatre in South Carolina.

Staying open on a week-to-week basis, Monetta is enacting single occupancy restrooms, adjusted concessions access and half-capacity parking to achieve social distancing. This drive-in – with its biggest screen nicknamed The Big Mo – took in more than 150 cars to watch three double features. Boaz is very wary of keeping people safe. “Its sort of like ‘The Invisible Man,'” he said. “You’ve got this invisible force all around you [and] you don’t know what way it’s going to act.”

Business is booming for drive-ins. Last week, Seoul’s only drive-in, the Jamsil, was crammed, with queues of automobiles waiting to go in. According to Yun Hye-kyung of the Jayuro Drive-in Theater in Gyeonggi, the coronavirus has increased interest in seeing films from your car. “Sales have increased 30 to 40 percent compared to before the virus outbreak,” Yun said.  “Currently, I believe drive-ins are the number one date spots for couples and for family gatherings as well. They’ve found a new form of entertainment due to this epidemic.” The most populated area around Seoul, Gyeonggi has eight drive-ins; the Jayuro alone can accommodate 900 cars.

In the United Kingdom, Manchester will have a new drive-in, The One Drive-In. Created by the OneAgency, films will be family-focussed and will show two screenings each day on three screens. Following government guidelines, it is expected to open March 26, 2020.

One drive-in that is stepping into the breach left by cancelled festivals is The Blue Starlite Mini Urban Drive-In in Austin, Texas. It will show, “SXSocial Distance: A Night of Short Films,” a series of four mini-festival evenings that will screen shorts previously scheduled for SXSW. Sadly, none of the feature films wanted to premiere there. “So I kind of expected this to happen, but the feature [films] didn’t write back,” owner Josh Frank said to Ars Technica.

“Features aren’t going to do a throwaway event because festivals want to say it’s the world premiere or the U.S. premiere… I never thought I’d say this, but we’re literally the only movie theater operating in Austin, Texas, and the surrounding areas. I never expected that to be the truth,” Frank added. “In a lot of people’s minds, it kind of revalidated what a drive-in could be for society.”

While drive-ins were ordered closed in Los Angeles on March 23, 2020, The Paramount Drive-In in Paramount, California had seen their business double in the previous week. The Showboat Drive-In Theater in Hockley, Texas, had almost 50% more business than usual for a March weekend. “Obviously this isn’t the way you’d want it to occur, but I’m excited for the idea that there may be a new generation of people that will get to experience going to a drive-in theater,” the owner Andrew Thomas told Jake Coyle of the Associated Press.

Of the approximately 700 operational drive-in movie theatres in the world, nearly half are in America. According to John Vincent of the United Drive In Theatre Owners Association, at best of those 10% remain open during the virus crisis. But, those which are have found sales to be brisk. And a drive-in can continue to be safe if concessions, tickets and restrooms are readjusted for these isolating times. Owner Doug Mercille said of his drive-in in Cadet, Missouri “At the drive-in, you’ve got to be in your own car.”

The drive-in was patented in May of 1933 by Richard Hollingshead whose mother found ordinary cinema seats uncomfortable. Working for his father’s Whiz Auto Products business, the problem found a natural solution. In its heyday, the drive-in was a place of wonder. “At the drive-in, spectators could smoke, eat, talk, and fumble around in the back seats with members of the opposite sex,” said William Dever, president of Experiential Dynamics and a passionate believer in the drive-in. In its heyday of about 5500 operating theatres in America alone, drive-ins were the vaudeville of their day. “There were new releases movies, great B-movies. Along with playgrounds, bingo and even fireworks. [Now] movie goers could view movies from the safety of their cars and drive-ins could offer alternative strategies for the delivery of concessions,” he told Celluloid Junkie.

Not being able to compete with the offerings of America’s 5,500 indoor theatres, older drive-ins are often considered more nostalgic than high tech. Many lack digital management. Online bookings might not be available and some operate on a cash only basis. By following guidelines on spacing of “seating” (what car gets what spot) and altering restroom standards to current extra health standards – with extra cleaning shifts – drive-ins strive to continue the big screen viewing experience.

Concessions, normally done person-to-person, can be ordered via text to the stand and delivered car-side. The 411 Twin Drive-In Theater in Cherokee County, Alabama has devised a non-contact drive-up window option for ordering concessions. Some drive-in owners are encouraging movie goers to bring food – a real no-no in the old days. At the Ruskin Family Drive-In in Florida, ticket takers keep their distance and wear gloves.

While it might only be a matter of days that the drive-in can bask in the glory of being the only show in town, their popularity is one sign of an enduring love of the big screen. Certainly, people grow weary of being home and streaming is always going to be around anyway. But the Coronavirus pandemic has magnified what we took for granted. People need escapism, entertainment and drama. The big screen still stokes our wonder and imagination.