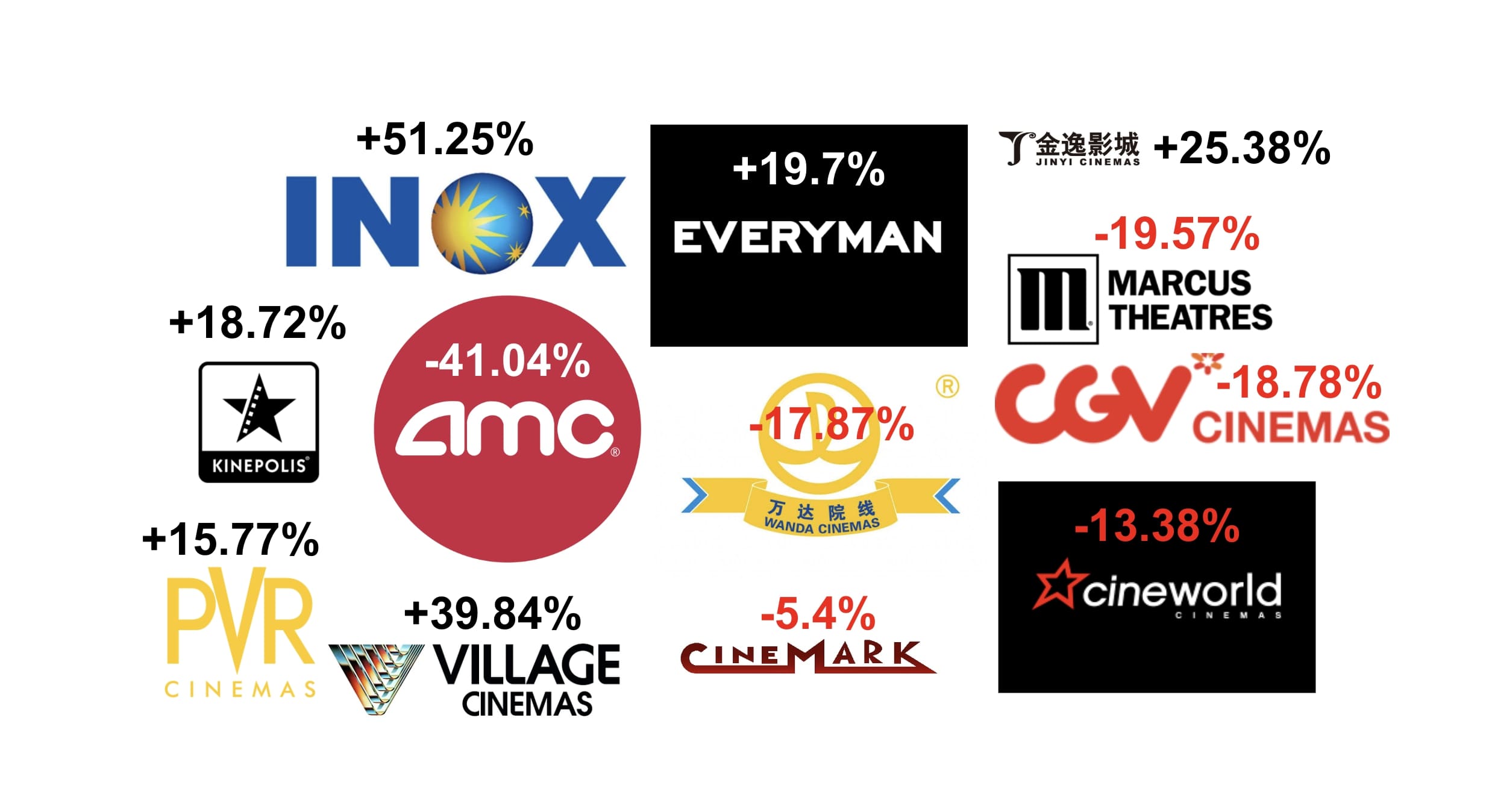 2019 was an eventful year for cinema. Worldwide box office grew to a record $42.5 billion, the Guardian announced that the growth in pre-show advertising would overtake growth in internet advertising for the first time in 20 years, and Moviepass officially shut their doors for the last time.

As we look forward to the rest of 2020, let’s briefly recap how the share prices from some of the world’s leading publicly traded exhibitors fared in 2019 in the face of challenges from streaming platforms, threats from day-and-date services, and a fluctuating landscape of mergers and acquisitions.

All share prices below are listed in USD for consistency, exchange rate fluctuations have not been taken into account.

CJ CGV, South Korea’s largest exhibitor, started the year off strong with a share price of $36.761, which went on to reach a high of $42.463 on March 18th, fuelled partly as momentum gathered around rumours that they were looking to spin off a subsidiary for some of their cinemas outside of South Korea and encourage investment up to a 30% stake in the new company. Their share prices went down to a year low of $25.406 on August 5th however, and only recovered marginally, closing out the year down 18.78% at $29.857. Change: -18.78%

INOX in India had a good year, with their share prices increasing 51.25% from $3.5493 to $5.3682. Strong box office performance from Bollywood titles like “Kabir Singh” and “Uri: The Surgical Strike” led to a ?700 crore uplift in box office for the first three quarters of 2019 compared to 2018, with 13 films passing the ?100 crore mark, up from 10 in 2018. Based in part on their strong revenue results, INOX stocks bounced back to a high of $5.424 in November after their share price dove to $3.57 in mid-August, when Reliance Industries announced they would launch ‘Jio First Day First Show’ in mid-2020, a day-and-date service which would allow their premium fibre broadband subscribers to stream films at home the same day they were released in cinemas. Change: +51.25%

Wanda Cinema Line opened the year at $3.17, reaching a high of $3.9281 at the end of April. Although local blockbusters “Ne Zha” and “The Wandering Earth”, grossing over $714 million and $668 million respectively, as well as Avengers: Endgame’s $607 million, helped smash China’s annual box office record, Wanda missed their ambitious Q3 estimates and hit a share price low of $1.9833 in mid-November. They turned their fortunes around slightly by the end of the year, closing out at $2.61, however that still left the organisation down 17.87%. Change: -17.87%

Jinyi fared significantly better, experiencing 25.38% growth over 2019 from $1.89 in January to $2.38 in December. However their share price showed high volatility by spiking to $5.5304 at the end of May before almost immediately plummeting back down to where it had been. Change: +25.38%

In Australia, Village Roadshow started 2019 at $1.9087 per share, and saw early signs of growth in 2019 after the public rivalry between brothers John and Robert Kirby in January 2019 led to a shake-up of upper management and a takeover bid. John Kirby, a board member, had criticised the leadership of his brother Robert Kirby as executive chairman, as well as that of Graham Burke, a family friend who was serving as CEO. Consistently falling share prices from 2014 were cited, and John Kirby soon hired an investment bank to investigate breaking up Village Roadshow, which operates theme parks and a production studio, as well as cinemas. Shares were down to a low of $1.6226 at the start of August, but by December, Pacific Equity Partners were in talks to acquire Village Roadshow, which helped to boost their share prices up to a high of $2.6771 on the 19th, and closing them out with a 39.84% increase on the start of the year, to $2.6691. Change: +39.84%

Cineworld opened the year at $3.335, but unfortunately the boost to anticipated Q2 results from Avengers: Endgame, and subsequent share price high of $4.198 in May was temporary, and by November 15th, some disappointment in the upcoming 2020 film slate had helped to push their share price down to a low of $2.477, from which they have still not yet fully recovered. Further share price depression occured in mid-December, when Cineworld announced plans to acquire Cineplex in Canada and take on their debt, adding 1,700 screens to their estate in North America, and thus dethroning AMC as the largest exhibitor in that territory. Overall, their share prices lost 13.38% of their value in 2019, and they closed out the year at $2.906. Change: -13.38%

Everyman Cinemas had a fairly steady year, comparatively, starting off at $2.6002, and hitting their high of $2.7006 on January 11th. A few days later, on January 17th they reported that they had opened 4 new venues in the previous quarter, bringing their total up to 24, and had agreed a loan of £30 million in order to facilitate further expansion goals – 14 new venues by 2022. Despite a dip to $2.0956 on the 5th of July, at the end of September, they reported that Q1 and Q2 performance had met expectations, with revenue up 16% and admissions up 9.4%, and their ambitious growth plans were successfully on track for 2019. A cautious market, perhaps waiting to learn whether this growth was sustainable, led their share price to dip slightly by 3.34% at the end of the year to $2.5133. Now that Everyman have shared news that they benefited from both record revenue, and number of openings (seven in 2019), the market seems convinced – by the end of January 2020, their share price had risen over 19.7% to $3.0087. Change: +19.7%

AMC started the year off with a share price of $12.28, and benefitted from “Avengers: Endgame” performance at the box office, which helped to boost their shares to $16.59 in April. “Star Wars: Rise of Skywalker”, however, didn’t perform as well as expected at the box office in December, and combined with AMC’s outstanding debt from their acquisitions of the Nordic Cinema Group, ODEON, and Carmike, as well as ongoing pressure from streaming platforms, AMC closed out the year at a low of $7.24. This represents the largest percentage drop in share price we recorded within this representative set of exhibitors; 41.04% over 2019. Change: -41.04%

Marcus Corporation, who own Marcus Theatres as well as Marcus Hotels & Resorts, earn roughly two thirds of their revenue from their theatre arm, and this proportion has been growing year-on-year. They started 2019 off strong at $39.50 and experienced a $44.78 high by the end of January, following announcements that their Q4 2018 preliminaries were higher than anticipated, and that they had closed their deal with Movie Tavern. By the 22nd of November however, analysts were anticipating flat box office results in Q4, and this pushed the share price to a low of $31.07, which was only boosted nominally to $31.77 by the close of market at the end of the year, a fall of 19.57%. Change: -19.57%

Cinemark began the year with a share price of $35.80, and though they outperformed their Q2 and Q3 estimates, and registered a high of $42.39 at the beginning of May, analyst expectations impacted their share price too, and they experienced a low of $33.05 on November 22nd, as Marcus did. Their share price didn’t suffer as much however, decreasing just 5.4% from January to close of 2019 to $33.85. Change: -5.4%

AMC, Cinemark, and IMAX all enjoyed slight boosts to their share prices following the announcement in November 2019 that the US Justice Department would ask the court to end the Paramount Pictures Consent Decrees. Removing the decree would allow Hollywood studios to own theatres for the first time in over 70 years, which sparked talk of possible take-overs and drove share price increases around the end of November 2019.

All in all, 2019 seems to have been a bit of a mixed bag for these exhibitors and their shareholders, but with several late year announcements of acquisitions, the trend towards industry reshuffling and consolidation looks set to continue into 2020. Though in some cases the debt exhibitors have accrued has looked risky to investors, they are taking on these debts to speed up the pace of their acquisitions, increase their market share, and begin to benefit from centralised operations and economies of scale faster.

Strong box office performance elicited peaks in many developed markets, and the “Avengers effect” graced many exhibitors with their high of the year, though that meant these exhibitors were also more exposed to the lows of the Hollywood slate. Although there is no obvious successor to “Avengers: Endgame” and the Star Wars sequel trilogy has come to an end, Disney is forging ahead with a staggering 23 releases this year (including the next phase of Marvel movies, a live-action remake of Mulan, and Pixar animations) and the sci-fi slack at Christmas could be picked up by Denis Villeneuve’s Dune, which is set for release on the 18th of December in the US. Though recent analyst predictions indicated that box office sales in the USA could fall up to 1.6% this year, box office in January 2020 was already up 8.7% against January 2019.

Indian exhibitors seem to have gone from strength to strength in 2019, and Bollywood shows no signs of relenting the pace of their big budget releases in 2020. PVR and INOX, the top two exhibitors in the country, are clearly convinced that the market has more room to grow, as they have plans to continue adding 80-100 screens per year each. China’s cinema industry growth is still in the high single digits, local titles are making a huge impact on exhibitor revenues, and officials have started to make a dent in the impact of piracy. However, tightening government censorship and tax evasion regulations saw several potential blockbusters withdrawn from circulation in 2019, and producers have been wary about what to invest in recently. Coupled with the recent outbreak of Coronavirus and subsequent cinema closures during Lunar New Year, historically one of the biggest weeks for cinema, and the Chinese cinema industry could be in for a slower year.

As always, the numbers are only one part of the story, and though exhibitors and the wider industry face their fair share of challenges in 2020, there is plenty to be optimistic about. Let’s hope the stock markets agree.

A.Skarlatos
Alessandra is a cinema industry insider who worked for five years as Marketing Manager for Arts Alliance Media (AAM). She is presently Content and Communications Manager at PureIP.

Latest posts by A.Skarlatos (see all)
Send this to a friend