If you’re reading this the chances are that you are well versed in the “is Netflix Killing Cinema” notion, as you may well have been for “is VHS killing Cinema” iteration decades previously. Whilst external commentators band around assumptions based on little more than a hunch that subscription services must be cannibalising cinema admissions, thankfully cinema executives themselves recognise the two can exist side by side, and indeed, can complement each other. And whilst in the past it may have been easy to blame stagnating attendance on the popularity of streaming services, that argument doesn’t hold true when the market saw a record-breaking year in 2018, with 2019 only a small step behind.

“We have long held the belief that streaming represents yet another virtuous relationship for cinema,” remarks Crispin Lilly CEO of Everyman Cinemas. “Over the last thirty years, the resurgence of cinema admissions has partly been driven by the proliferation of alternative downstream opportunities for film producers, from VHS to Netflix. The positive correlation between cinema going and streaming at home proves that the more people watch filmed content, in any format, the more they want to watch – which directly increases their frequency of visiting the cinema.”

It will therefore come as little surprise that the third EY Quantitative Economics and Statistics (QUEST) survey commissioned by NATO (National Association of Theater Owners) re-enforces the positive relationship between streaming behaviour and cinema attendance: people who watch the most movies in cinemas also streamed the most content, and vice versa. 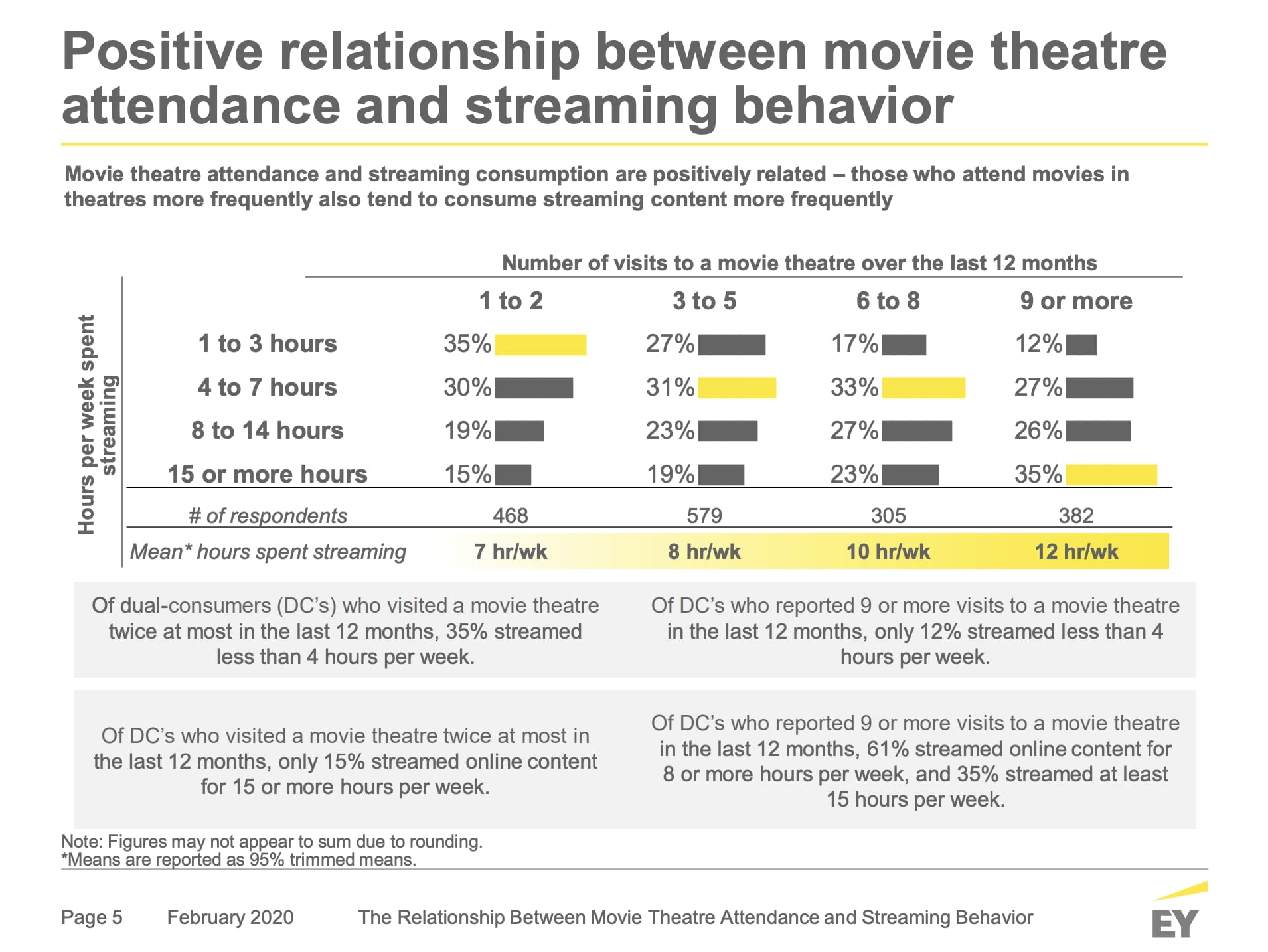 Of the 2,520 (US based) participants identified by EY QUEST, 1,734 saw at least one movie in theatres and streamed at least one hour of content per week in the past 12 months. For every race and demographic, average streaming hours per week were higher for respondents who visited a cinema nine times or more than respondents who visited only once or twice. In particular, the highest streamers (defined as 15 hours or more per week) visited the cinema at least nine times in a 12 month period: 28% of total respondents fell into this category. The average across all age groups: six annual cinema visits and nine hours streaming per week.

“It hopefully doesn’t sound too arrogant to say that the key take-outs [from the survey] were probably as expected. We’ve known, I think, for a long time that the most frequent streamers are also our best customers,” comments Phil Clapp, CEO of the UK Cinema Association. “It mirrors similar research findings over a number of years about the overlap between film consumption at and out of home. A piece of work done by the UK Film Council [PDF link] segmenting film fans into different sections found that ‘avids’ were people who wanted content whenever and wherever they could get it”. 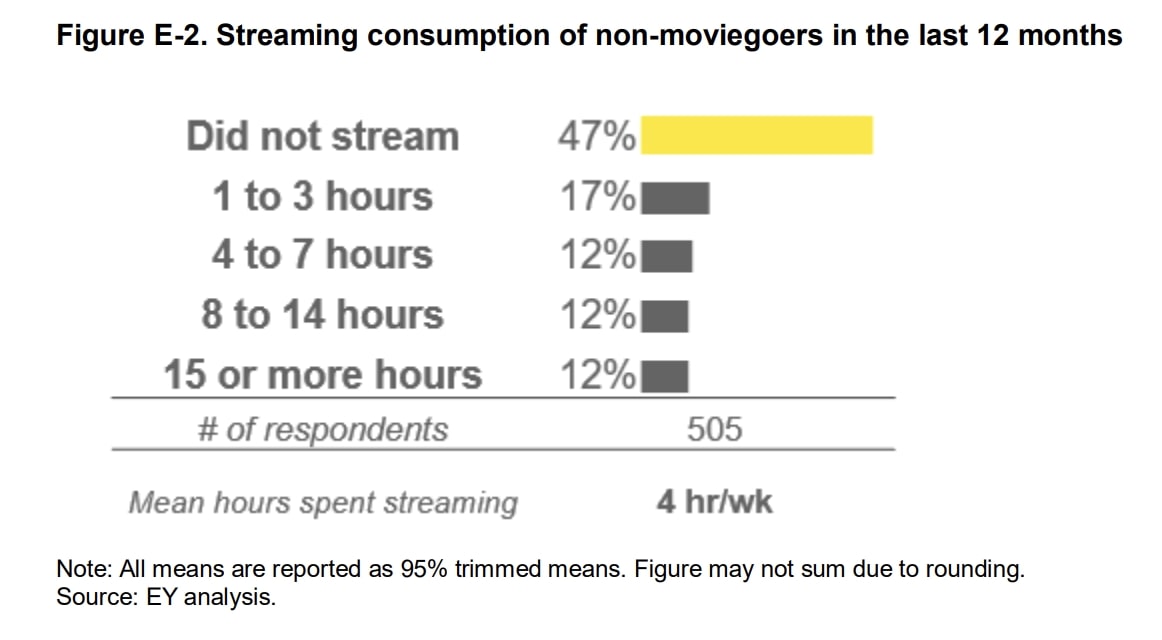 Whilst these findings are undoubtedly excellent, it is important to note that the same is also true at the other end of the scale: those who don’t stream don’t tend to go to the cinema either. Unsurprisingly, it was the older age category (53-72 years) who scored highest in this regard, but it’s far from bad news for theatrical – almost a quarter of participants in this category still visited the cinema at least nine times per year. And as many exhibitors can attest, this audience segment continues to grow. Thanks, “Downton Abbey”.

Nor does it seem that the teenagers are abandoning cinema in quite the numbers we believe them to be. 13-17 year olds predictably spent the most hours streaming from the group (10.5 per week) but 49% of them also visited a cinema at least six times a year, and approximately 42% of the time they spent streaming was watching movies. It’s clear however, that busy lives may be getting in the way for the 18-37 year old group. 43% of respondents in this category who went to the cinema only 1-2 times per year also streamed no more than 3 hours of content per week, with only 39% of total content streamed being films, and a significant increase in the “other” category (sports, comedy and other short form content). 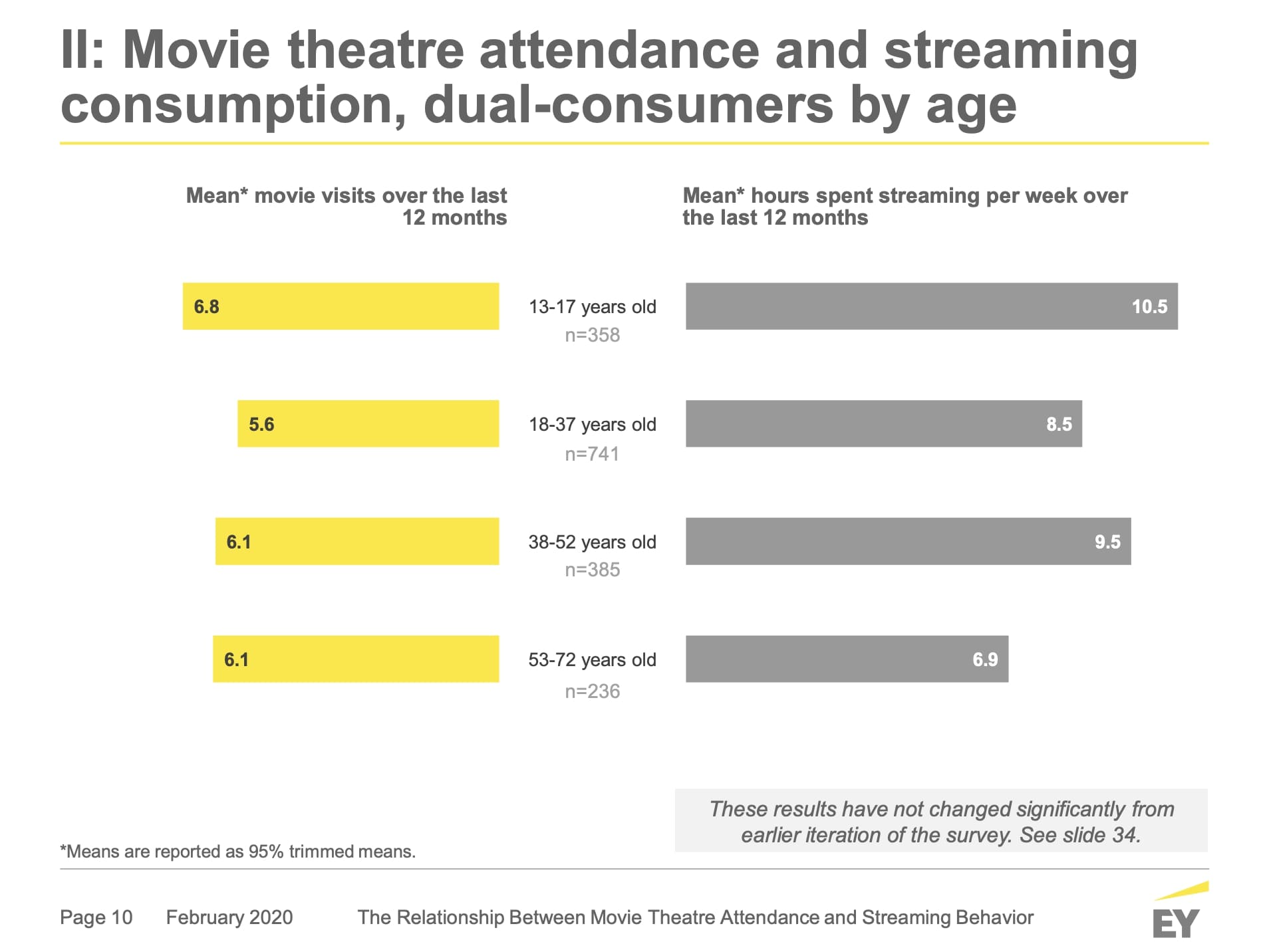 Another key point that will please both cinema owners and film distributors alike is the majority of consumers are able to identify which of the movies on a streaming service were released in cinema, with 62% more likely to stream a film that they know has been released theatrically.

These findings surely present opportunities to both the cinema and film distribution industries. Netflix and Amazon have notoriously held their data cards close to their chest, which makes targeting specific groups almost impossible. But there’s certainly the potential to exploit this to the benefit of the cinema sector. “It will be interesting to see what happens when a provider who has a vested interest in seeing that upside delivered arrives on the scene next month in Disney + ,” Clapp remarks.

Whether your interest lies in theatrical, streaming or indeed both, it is encouraging to know that EY (QUEST)’s findings are consistent with their previous two studies, set within a growing theatrical and streaming environment. Players from both sides are beginning to venture into the other – time will tell whether successfully or not – but ultimately this is good news for story tellers and consumers alike.