The Year of Trafalgar

2018 was a rollercoaster ride of a year, and as 2019 dawns, there’s still plenty of uncertainty around the future of the UK. But in the Event Cinema industry for one company in particular, 2018 has been a certified smash hit. Enter Trafalgar Releasing. Join us as we look at how 2018 really was their year, as we talk to the company’s key players about the biggest Event Cinema hit of the year and look at what the industry can learn from their successes.

Based in central London, Trafalgar Releasing launched back in 2006, having started life originally as Picturehouse Entertainment’s distribution arm and was acquired, more recently in 2017, by parent company Trafalgar Entertainment Group.

Led by CEO Marc Allenby, their back catalogue of content has always included a strong Arts-based programme with regular features from The Met Opera, the Bolshoi Ballet and Glyndebourne’s summer opera programme playing to UK audiences. Content from the world-famous Royal Shakespeare Company – aka the RSC – and the Royal Opera House regularly plays to global audiences.

Trafalgar has an impressive track record of musical theatre events including “An American in Paris”, “Funny Girl”, starring Sheridan Smith and most recently “The King & I“, recorded live at the London Palladium at the end of November. The latter by itself broke records to be the best-selling theatrical release of 2018, attracting more than 135,000 global attendees. It hit the number one spot in the UK on the day of its release and took double at the box office than that of the number two film, “Fantastic Beasts: The Crimes of Grindelwald” [source: Trafalgar Releasing]. 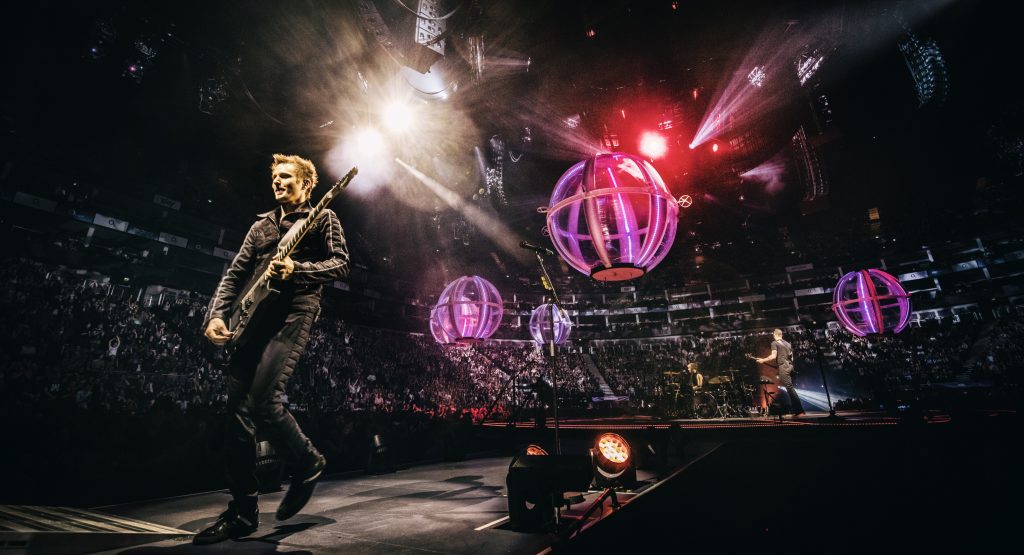 There’s no detracting from the above successes in their own right but Trafalgar’s crowning glory this year has to be the success they’ve seen with their recorded music events. 2017 was a strong year for them in this area with releases such as “Ziggy Stardust and the Spiders from Mars”, “David Gilmour Live at Pompeii” and “Black Sabbath: The End of the End”.

But 2018 saw an impressive programme of content step their game up even more with “Distant Sky: Nick Cave and the Bad Seeds Live in Copenhagen”, “Muse: Drones World Tour” and “Coldplay: A Head Full of Dreams” were among the 2018 release list. “Muse: Drones World Tour” grossed USD $2.5 million globally. And Coldplay with their “A Head Full of Dreams” film, their second official Event Cinema outing after “Coldplay Live 2012″, took more than USD $3.5 million after the one-night-only event on November 14th. 300,000 cinema attendees around the world flocked to see the international band’s documented rise from playing London pubs to iconic stadiums around the world, plus their backstage antics, making it the best-performing rock music event of 2018 [source: Trafalgar Releasing].

But it has to be said that, despite the above titles successfully growing Trafalgar’s impressive archive, there was one film that blew all music event releases, including their own and all of their competitors’, cleanly out of the water. BTS, the K-pop boy band taking the world by storm, released their “Burn The Stage: The Movie“ feature film on 15th November and current global box office figures, at the time of writing, stand at a huge USD $18.5 million.

Prior to the BTS juggernaut, One Direction’s 2014 film “Where We Are” was firmly holding on to the Event Cinema number one slot. It reportedly garnered 1.2m in ticket sales and grossed, after the two day event in the October of that year,  USD $15 million worldwide. BTS’ ticket sales are recorded at 1.4m with more than one million of those having been sold in advance. After additional encores in the US, UK and other territories, plus the film’s Indian premier, the USD $18.5 million figure was reached, comfortably outstripping “Where We Are”. 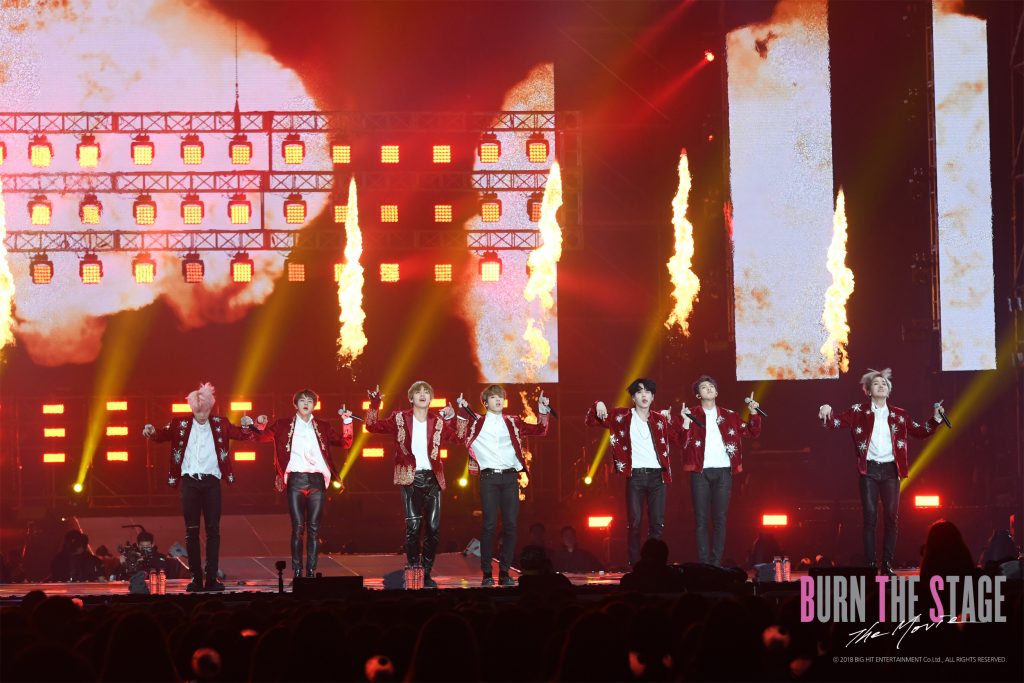 The Secret of BTS

What’s intriguing about the huge success of “Burn The Stage: The Movie” and how phenomenally well it did, is that, yes, BTS have a worldwide following of avid fans and their international presence seems to be ever-increasing. And the success of their Wings Tour is testament to that. But their movie is a fully subtitled, foreign language film and yet it attracted fans from all over the world.

Music may be an international language that transcends cultural or communication differences – a fact that’s certainly been proven by their international, not-all-Korean-speaking fans, self-titled ‘The Army’ who are entirely, and often frenziedly, devoted to the band. But considering the fact that the film is in Korean and in the context of its record-breaking success, it’s clear that BTS’s global presence is to be taken seriously, whether you’ve heard of them or not. And Trafalgar astutely recognised this and accordingly moved to distribute the content.

CEO Marc Allenby comments that, “We saw the fanaticism of their fans and the momentum building around them when they played at the O2 and when they appeared on Graham Norton’s TV show. At the O2 gig we felt the energy which was eye-opening.”

Aside from the overall box office success of the film, another notable achievement is that “Burn The Stage: The Movie” – now the most successful Event Cinema release of all time – attracted huge numbers of young audience members. It’s true that BTS’ fans are propelling them to superstardom so this may be an obvious observation but the future development and sustainment of the Event Cinema industry as a whole, needs more audiences like these being brought into cinemas. Learnings from this event, and others that have similar success, need to be identified and, where possible and relevant, implemented to ensure that young people are catered for in the cinema space and then encouraged to return.

Ollie Charles, PR & Marketing Manager for Trafalgar, says of the audience demographic that they were delighted to bring so many young fans into the cinema space to an event that will go down in history. But he also says that educating younger audiences so that they’re aware of events like these, is part of the problem, “It’s everyone’s dream [from an industry perspective] to get young people into the cinema. How do you do it? But BTS have a young, teenage girl fanbase which was clear on Twitter. But a lot of them didn’t even know they could buy tickets from the cinema like you would for a normal film.” 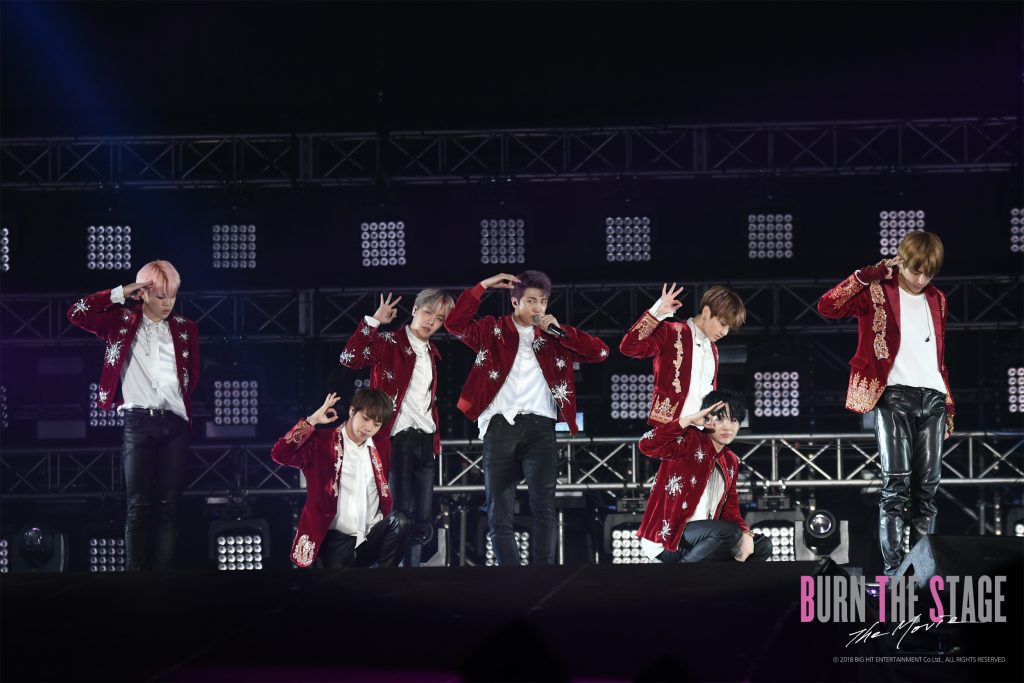 Learnings for the Industry

So what is it that makes titles such as these such a huge success? There’s no avoiding the fact that the content has to be of an excellent standard to start with. But what are the other factors that elevate a ‘good’ piece of content to the lofty heights of success that Trafalgar have seen this year with Coldplay and BTS?

Allenby admits that “in part, the success of these events was the timing of them. Coldplay were just off the back of a very successful global tour, similarly with BTS and their more contained world tour but with them we witnessed the level of international support their fans have for them. Having spoken at the UN recently as well meant that there’s a relevance to BTS at the moment.”

But Trafalgar don’t just strike it lucky when it comes to choosing their upcoming content. They pride themselves on what they’ve learned over the years, having been around since the industry took off over a decade ago. Allenby goes on to say, “We’ve built a very good, experienced team here at Trafalgar. Our teams here in the UK, and in the US, all know their jobs very well so when a new piece [of content] comes in, we know how to maximise it so that we’re not discovering, we’re implementing.”

And it certainly doesn’t hurt that BTS’ fanbase are of the ‘internet generation’ so their social media presence is considerable. While Trafalgar market their projects, and market them well, they’re also not trying to deny the fact that a huge Twitter or Instagram following for one of the subjects of their films isn’t a bad thing. Charles says, “We’re always very aware, especially in the case of BTS, that they have a huge brand themselves with millions of fans around the world. And so we don’t try to avoid or deny that but use it our advantage with the marketing and promotion of the film.”

The main takeaway point for Allenby and the team at Trafalgar when looking back over the year they’ve had, and more specifically the BTS and Coldplay projects, is that the music industry can work incredibly well within the Event Cinema space and to reestablish this is important. Allenby says that, “There have been relatively high profile releases that haven’t reached their full potential and there’s often a backstory as to why that’s the case, whether the support hasn’t been there or for other reasons. But the music industry should see the cinema space as a very interesting opportunity for them to further their artists. And we’ve demonstrated good returns on audience numbers and box office figures.”

So what does the future hold for Trafalgar? Allenby says that they’re in the strong and fortunate position of being able to invest in future projects which, in turn, gives them more control over what they distribute. He says, “As a company we’re quite well resourced in terms of the ability to help with the financing of initiatives where the business case allows.”

Another exciting prospect for them and an interesting one, is that “The King & I” transfer from the Lincoln Centre in New York was a production from parent company Trafalgar Entertainment Group and then distributed by Trafalgar Releasing. So, as Allenby says, “This demonstrates the joined up nature of the company as a whole.”

These developments in working more synergistically with their parent company on productions certainly puts them in a position of strength where [Trafalgar Releasing] will then be able to be more choosy over their projects, but they’ll also be in an advantageous position for future growth. And it’s fair to say that their prosperity looks set to continue throughout 2019.