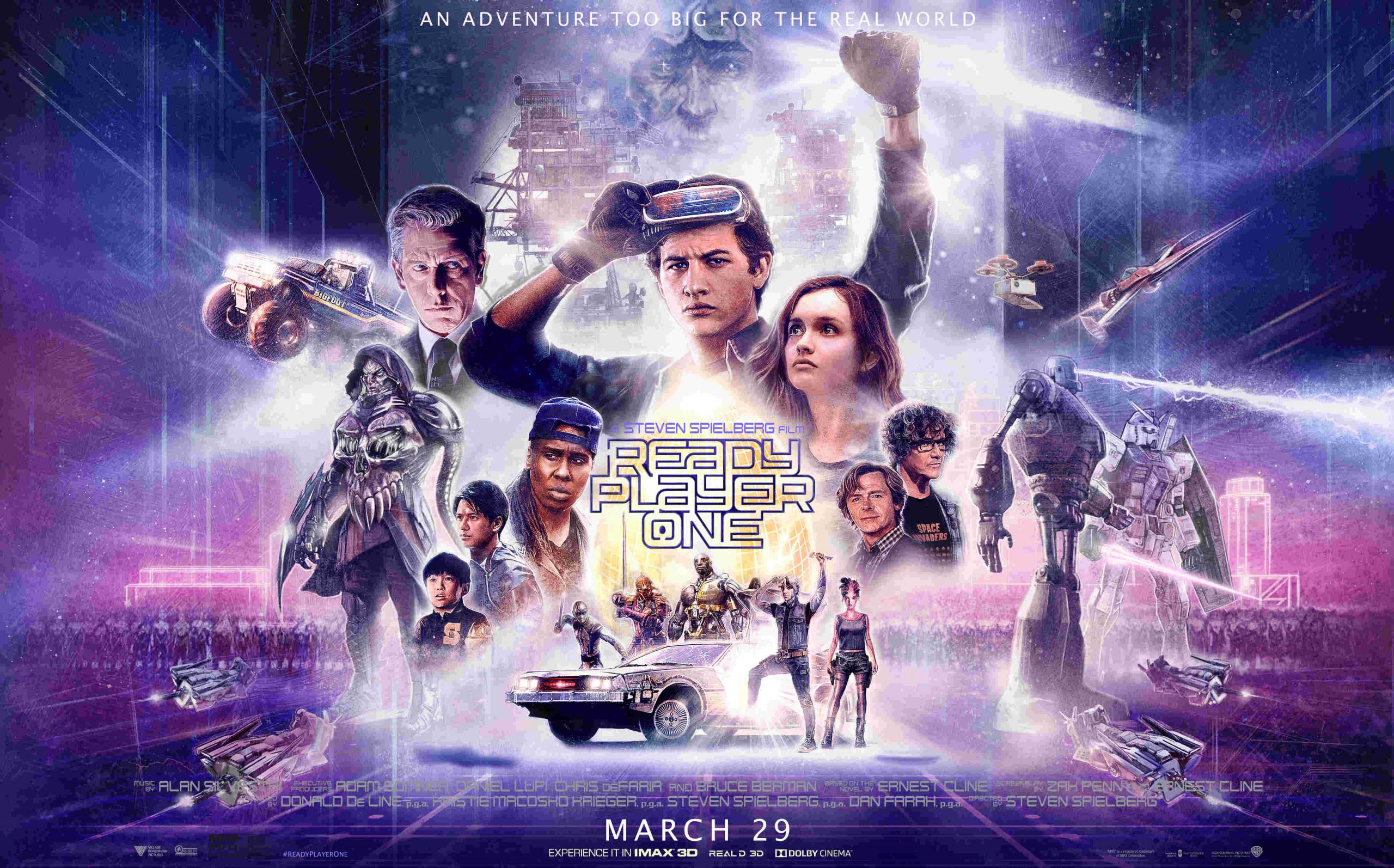 Before we get into what happened this weekend I’d just like to let everyone know that this will be my last Sunday preview/recap column for Celluloid Junkie. My Scout 53 consulting business has rapidly expanded and my available bandwidth for the column has been shrinking as of late. Thanks to everyone who reads these articles every week and a special thanks to Patrick and Sperling at CJ for allowing me to be a part of their team for more than a year. -Jim

OK, where were we? Oh right. Hey, we have a new movie sitting at the head of the box office charts this week! “Pacific Rim: Uprising” was a big so-what here in the United States but its USD $28 million was enough to dethrone the big black cat out of its perch for the first time since, I believe, the reign of King George V. Johnny Olson, tell “Pacific Rim: Uprising” what they’ve won! “Well Jim, they’ve won a six-day stay atop the U.S. box office charts before they’re decimated by Steven Spielberg!!!” Yes, hopefully Universal enjoys their 139 hours in first place because come Wednesday night at 7:00 PM their time spent singing Freddie Mercury victory songs comes to a close. But more about that later.

Grossing a bit higher than our extremely pessimistic USD $21 million prediction last week, Pacific Rim Uprising’s best chance at making back its bloated USD $155 million budget will come from overseas where the film opened in most territories, including China, day-and-date with us here in North America. The result? A peppy USD $120 million internationally with a hefty chunk coming from the Middle Kingdom. If you think you’ve heard this domestic vs. international refrain before, you did. It was last week with “Tomb Raider.”

Elsewhere, “Sherlock Gnomes” wasn’t as brilliant as its namesake at the box office, opening in fifth place with only USD $10.6 million according to comScore, which was a bit below our projections. The 21 Rotten Tomatoes grade means little on an animated title but those who follow Cinemascore numbers know that a B+ on a kids film actually isn’t all that terrific.

Sony’s “Paul, Apostle of Christ” opened to a lackluster USD $5 million on 1,475 screens, landing it in 8th place. It’s a jungle out there for faith-based films and one that will only get even more dense this coming weekend with the new “God’s Not Dead” instalment. If it was Sony’s intention to open in the low teens this past weekend and then take advantage of a second weekend that included Good Friday and Easter on its way to a respectable overall cume then they guessed wrong. There’s simply too much noise in too small of a space.

Sadly, Fox couldn’t lure enough heliophobes into the secure darkness of their local cinemas to conjure up a decent opening on “Midnight Sun”, which came in at a not-so-sunny USD $4 million for the weekend. As we mentioned last week, please stop with the young adult titles where one of the stars suffers from some malady that even doctors at Mass. General would find bizarre, as if they had just been presented with John Merrick. “Midnight Sun” ended up with a decent A- Cinemascore and its RT score came in at 21 despite hovering at a snappy 3 for part of its opening Friday. Way to break double digits, gang.

Director Steven Soderbergh switched gears from his recent “Logan Lucky” disruption and now decided that the way to be a game changer in the movie industry was to shoot a film completely on his mobile phone for a little over $1 million with this past weekend’s “Unsane”.  What ultimately appeared on movie screens was a blurry, grainy, mess of a film that left audiences a bit foggy themselves. The film opened to USD $3.8 million on 2,023 screens and its Cinemascore was a limp B-. Wake me when the disruption starts.

On a happier note, Friday was National Puppy Day so what better weekend to open “Isle of Dogs”, director Wes Anderson’s return to the big screen, which got off to a howlingly good start with USD $1.5 million dog bones for a Per Doghouse Average of USD $58,150. I promise that’s the end of the bad dog puns.

“Ready Player One” (Warners)—The year is 2044 and a VR program called OASIS rules all life as we know it. When the program’s founder dies, a cyber scavenger hunt ensues. The film is directed by Steven Spielberg and stars Ben Mendelsohn, Mark Rylance, Simon Pegg, Olivia Cooke, TJ Miller and Tye Sheriden.

The Verdict– The film received a much needed boost two weeks ago when it wowed audiences at SXSW, despite some glaring technical glitches. Young males are the primary audience for the film and it looks like Warners has those in spades. The 1980s nostalgia slant of the film might bring in an older audience as well as the ad campaign feels very 1986. While many techies are genuflecting and making the sign of the cross in anticipation of this film coming out (by the way, it opens on Thursday) how far it is able to seep into mainstream moviegoing remains to be seen. Still and all, with an incredibly slick look and feel, Spielberg’s name and a long Easter weekend ahead of it here in North America, watch for Ready Player One to land in the USD $51 million range for four days.

Tyler Perry’s Acrimony” (Lionsgate)—There are two things that Tyler Perry loves: 1) Dressing up as Madea, 2) Movies about women scorned. Taraji P Henson stars as a woman who finally gets fed up with her husband’s cheating. I doubt intensive couples counseling is the solution that she ultimately settles on.

The Verdict: Perry’s non-starring films vary from the USD $8 million of “Single Moms Club” to 2013’s “Temptation”, which opened to USD $21 million. Taraji certainly has a following and attaching Perry’s name to it immediately perks up the ears of his fans. USD $16 million.

“God’s Not Dead: Light In The Darkness” (Pure Flix)—David A. R. White stars along with John Corbett in this third entry into the “God’s Not Dead” franchise. We often like to provide your Fun-Fact-To-Know-And-Tell for the day and today’s is that White is one of the co-founders of Pure Flix, the film’s producer and distributor.

The Verdict: The original GND grossed USD $60 million in 2014. “God’s Not Dead 2” fell to USD $20 million in 2016. Anyone see a trend developing? Couple that with “I Can Only Imagine” and “Paul, Apostle of Christ” and you have a Route 405-like traffic jam of three faith-based titles in three weeks. I don’t care if it is Good Friday and Easter or not, getting fans of this genre to come out on three successive weekends is going to be difficult. Plus, if “I Can Only Imagine” continues to hold as unimaginably well as it did this past weekend then this Pure Flix offering could be headed to the same tumbleweed wasteland in which “Paul, Apostle of Christ” currently resides. And we haven’t even mentioned the real reason this won’t match either of the previous two installments—Pat Boone isn’t in this one! USD $6 million.

Neon releases “Gemini”, a thriller with Lola Kirke, Zoe Kravitz and John Cho. I’m sure it’s a lot more interesting than how I just lazily presented it.

If you hurry right now you can probably still make the showing of the anime title, “Ponyo,” here in the States. On Tuesday the Royal Ballet Company celebrates the Leonard Bernstein centenary with, umm, “Bernstein Centenary.” Wednesday we observe Easter early with “The Messiah” from the Bristol Vic in the United Kingdom. Friday features a return to the big screen of everybody’s favorite cinematic catastrophe, Tommy Wiseau, in Part One of “Best F(r)iends”. You’ll have to wait until June 1st for the unforgettable climax when Part 2 hits theatres. Lastly, a bit of decorum is brought back to the proceedings with The Met Opera’s “Cosi Fan Tutte”.

“I do wish we could chat longer, but I’m having an old friend for dinner.”