How Many Macbeths Is Too Many?

In the year that will see the Royal Wedding of Prince Harry and Meghan Markle, even more Star Wars mania and Jamie Lee Curtis returning to the Halloween film franchise, we, the general public, are going to be treated to four, yes FOUR, productions of Shakespeare’s Macbeth when they grace the big screen. All in the space of two months.

The Bard’s classic tragedy is a tale of betrayal, lust, deadly ambition and murder. But what exactly is it that keeps directors, actors and audience members alike coming back to this story time and again? Is it these themes that get our juices flowing or is there something else? And maybe more to the point, is there room for so many different interpretations of Ye Olde Scottish Play in two months or, frankly, will everyone soon be sick to death of Macbeth?

First up, Tuesday 13th March will see Goldfinch Entertainment and British director Kit Monkman’s retelling of the Scottish play in all its one-night-only glory at cinemas all over the country. Distributed by CinEvents, an Event Cinema distribution company, and released – not accidentally – in Shakespeare week, it’s the first ever filmic version of the Shakespeare play to be shot entirely on green screen. Starring Mark Rowley and Akiya Henry, Monkman says his vision was “to try to reclaim some of the territory that I feel that film has rather abandoned over the last fifty to sixty years and that is a collaborative engagement with its audience”.

Bringing theatrical content to the big screen, Monkman’s adaptation is perfect for those studying this particular play; whether GCSE, university or mature students. The film covers the traditional play accurately and the cast are dressed in traditional garb yet the filming technique and final edit has the audience drifting around the layers of a multi-tiered globe, zooming in on particular scenes of action. Its tone is anti-naturalistic as, says Monkman, is Shakespeare’s storytelling and its world is dark and claustrophobic.

Different to the other productions, it’s a theatrically-styled film rather than a streamed live play, to state the obvious. But we actually see Macbeth’s torment more vividly than you would even at a live stage show, thanks to the extreme close ups that capture his inner troubles. Helpful as well to those who don’t fare well when attempting to sit still through a three-hour plus performance, it runs at 121 minutes. 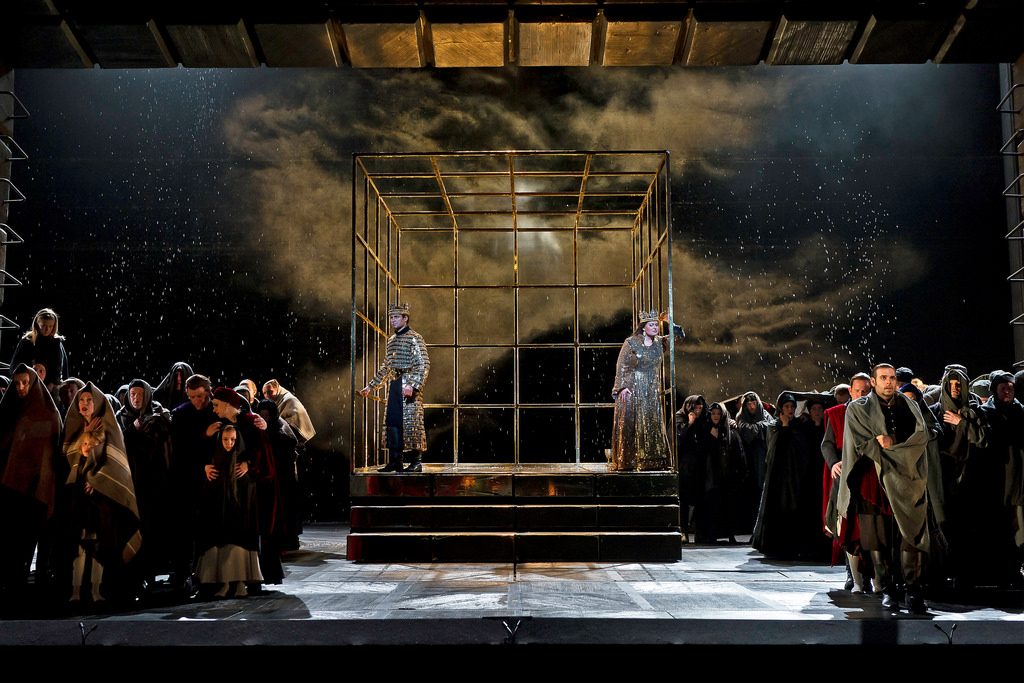 The next release of Macbeth of 2018 comes from the Royal Opera House. Verdi’s powerful opera, originally written in 1847 for the Teatro della Pergola in Florence, has been frequently revisited over the last century and a half. With certain similarities to Shakespeare’s original, Verdi condenses parts and makes imaginative cuts yet the main thrust of the play is retained. The ROH’s live screening is being streamed on 4th April to cinemas nationwide as a way of making opera more accessible, not to mention affordable.

When questioned as to why Macbeth is as popular as ever, Oliver Mears, the director of Opera at the ROH says, “In many ways the reasons why it has endured in the way it has derives from the power of Shakespeare’s extraordinary text and these themes he explores […] In particular, ambition and the thirst for power and the way it can turn human beings into corrupt animal figures”.

The themes Mears speaks of are undeniably fascinating. Most of us could surely say we’ve had thoughts of how to be more successful in our chosen lines of work, even if it means being slightly ruthless or that we’ve tried to think of ways to get more money and demand more respect from those around us. 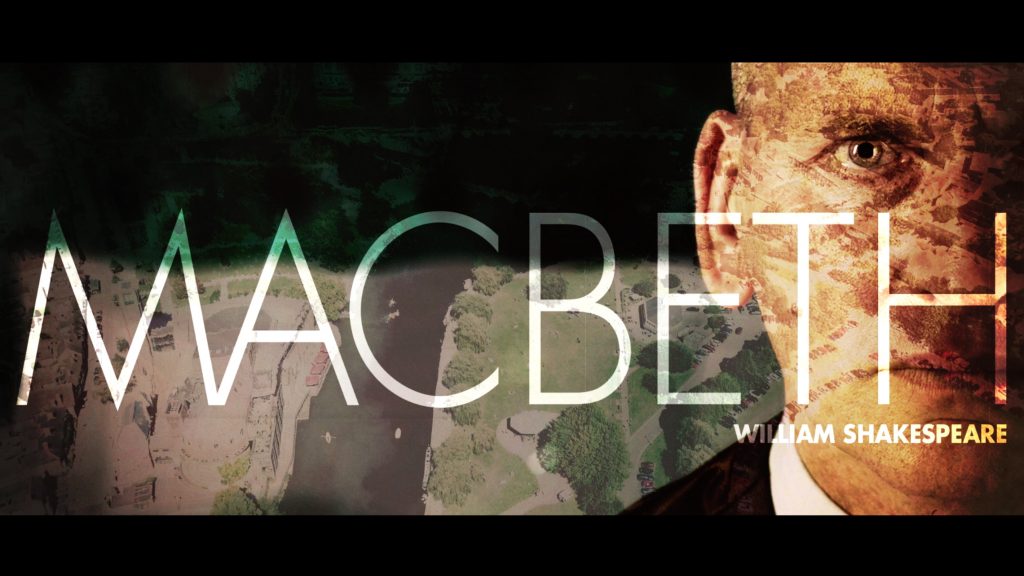 The third Macbeth is from none other than the home of Shakespeare himself; the RSC, based in Stratford-Upon-Avon. Christopher Eccleston (Doctor Who, The A Word) and Niamh Cusack (The Playboy of the Western World, Always and Everyone) star as the devilish duo, directed by Polly Findlay. Wannabe theatre-goers living a distance from the Midlands may find it logistically difficult or impossible to actually attend the live shows, hence the live screening which is scheduled for 11th April. Perhaps highlighting the allure of Macbeth for fans and actors alike, On Eccleston’s casting, RSC artistic director Gregory Doran commented: “Christopher Eccleston rang and said ‘I know you’re going through all the plays in the canon, when you get to Macbeth can I play him please?”

Talking of the multitude of Macbeths that are on offer in 2018, Findlay says how surprising it is that all of them happened at the same time, “We can’t quite believe it […] it is ridiculous, completely ridiculous. All the reviews are going to compare and contrast”. Findlay does, however, say that when she shared her notes with [Rufus] Norris, post-design deadline, despite having similar views on the text’s meaning and purpose, she was confident that their respective adaptations “are going to be completely different.”

The second of the theatrical Shakespeare heavyweights, but fourth on our list, is the National Theatre. Starring Rory Kinnear (Othello, Threepenny Opera) in the title role with Ann Marie Duff (King Lear, Saint Joan) as Lady Macbeth, their Macbeth is directed by current Artistic Director Rufus Norris. It is the first time Norris has directed Shakespeare in 25 years.

“I haven’t focused on his work or on classics generally partly because there have been so many great directors who have done it and I am drawn to the new, to the great writers of the future.” His plan is to “sit down in the room with the two of them [Duff and Kinnear] and with an expert who really understands, in all the ways that I don’t, what that play is, so we can just go line by line.” 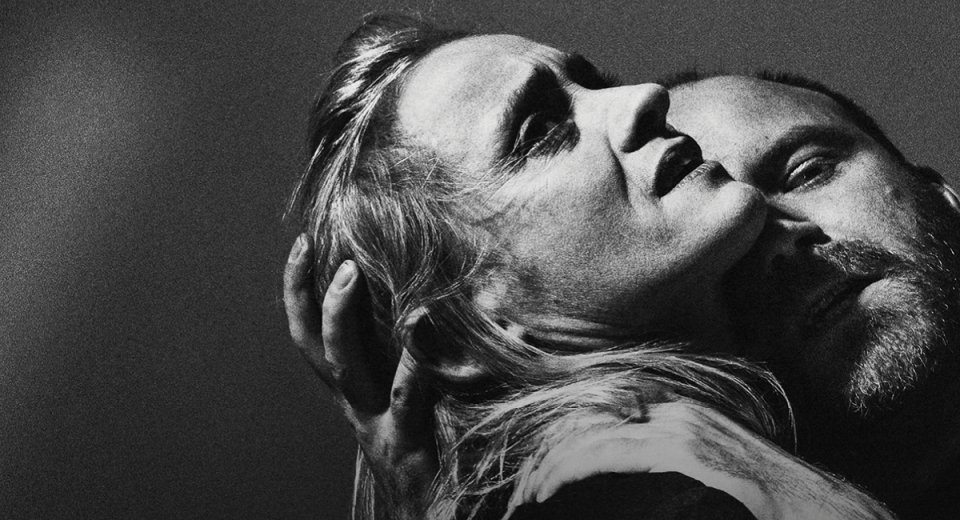 The NT Live screening is on 10th May and somewhat ironically, these two National Theatre veterans starred in an RSC production of the same play in 2016 but were nabbed to appear this year instead at the world-famous Southbank venue. The trailer for the play, available on the National’s website and YouTube, shows a taster of their chemistry and makes it clear why the two work so well together as the scheming husband and wife.

NT Live pioneered streaming live plays back in 2009 with Phedré starring Dame Helen Mirren. “The objective is greater access”, explained then director of Phedré and Artistic Director of the National Nicholas Hytner, and it seems to have really taken off in the last few years, with event cinema revenue steadily increasing year on year.

Each imagining of Macbeth to be released in early 2018 may be based on the same Shakespearean play but they’re all differentiated by their content and original genre; theatre, opera and film. And what’s more is that this play is based so heavily in the human condition – jealousy, greed, ambition – that every adaptation has great scope for a different interpretation depending, in part, on the director and, perhaps more so, on its particular audience. But interestingly Macbeth is very relevant to today’s international political climate. As Michael Billington puts it, “It deals, after all, with the destructive nature of unchecked power-lust and political ambition.”

So, in actual fact, four doesn’t seem to be too many adaptations of the same play. If anything, there is a certain anticipation to see what each production will do with Shakespeare’s anti-hero and his infamous story. In fact, the more the merrier. Because after all, isn’t interpretation part of the joy?