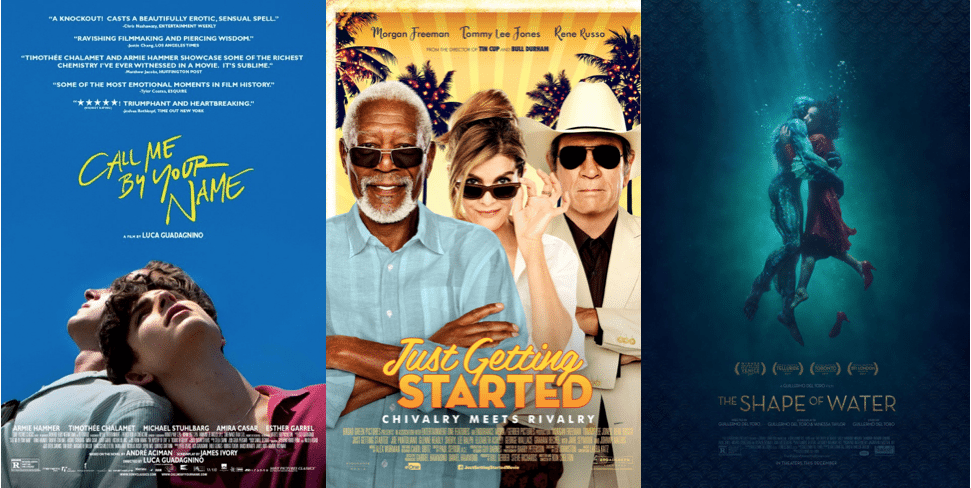 “Disaster Artist” and “The Shape of Water” debut to enormous numbers as Academy season starts in full force.

It’s all about holdovers today as with no new wide openings it was left to the November films and the limited releases to tote the boxoffice weight this weekend. Disney’s “Coco” carried the torch again, winning the weekend with $26 million, crossing the $100 million mark here in the States. In second place was “Justice League” which is laboring here in North America and still hasn’t broken the $200 million plateau yet (that should happen on Monday or Tuesday) while its overseas performance has been more robust, especially in China where it opened to USD $52 million, 30% higher than “Wonder Woman”.

The feel good movie of the holiday so far is Lionsgate’s “Wonder” which continues to rack up solid numbers, adding another $12 million this past weekend for a total of $88 million here in North America.  In addition, both “Lady Bird” and “Three Billboards…” grossed $4.5 million this weekend, though 3B needed twice the number of screens to do their $4.5 million.

The 2017 holiday season is turning out to be one of the best in recent memory for serious, adult fare. This past weekend Guillermo del Toro’s “The Shape of Water” opened two New York locations and nabbed a staggering per location average of $83,000. Couple that with the debut of “Disaster Artist” which took in $1.2 million in only 19 locations and that’s a hell of a 1-2 punch. Woody Allen’s “Wonder Wheel” was less successful and could only muster a per location average of $28,000 in five locations, a very low total for Allen.

Holdover “Call Me By Your Name” continues to shine, adding $281,000 in 4 locations this weekend and “Darkest Hour”, which I highly recommend after seeing this weekend, is also finding an audience, grossing $109,000 in four theatres.

“Just Getting Started” (Broad Green)—Tommy Lee Jones and Morgan Freeman star as an ex-FBI agent and ex-mob witness trying to evade bad guys in this buddy action comedy, or as “action” as you can get with two stars who are a combined 151 years old. Ron Shelton settles into the director’s chair for this. Shelton had a great run of films back in the late 80’s with “Bull Durham”, “White Men Can’t Jump”, “Cobb”, and “Tin Cup” but last time I checked it’s no longer the 80’s and Milli Vanilli aren’t charting any longer. Shelton hasn’t directed a single feature film since 2003’s disastrous “Hollywood Homicide”, which by the way featured some of the worst dialogue in a major motion picture and an on-foot chase scene through Venice, CA that somehow felt longer than the Eisenhower Administration.

The Verdict: If it can convince enough octagenarians to put down their creamed corn and prune juice, “Just Getting Started” might provide some light entertainment for an audience who, shall we say, doesn’t get out much due to the fact that the hoverchair is so difficult to get in and out of the Pleasant Acres shuttle van. A side observation-normally a studio develops an intensive social media campaign for a film. The SM budget on this must be, well, zero.  $4 million

“The Disaster Artist” expands this week as will other limited titles such as “The Shape of Water”, “Darkest Hour” and “Wonder Wheel”

“I, Tonya” (Neon)-Margot Robbie stars as everyone’s (not so) favorite Olympic figure skater in this (not so) true story of Tonya Harding’s difficult relationships with her abusive mother (Allison Janney in a career best role) and husband (Sebastian Stan as a clueless Jeff Gilooly). Having seen the film I can recommend it as a somewhat truthful and ultimately sympathetic look into what shaped Harding’s character and the events leading up to the famous lead pipe incident with rival Nancy Kerrigan. By the way, if Paul Walter Hauser isn’t nominated for his supporting role as the hilariously inept and self-important Shawn Eckhardt there is no justice in the world. None. Zero.

The Event Cinema landscape ramps back up this week with Monday’s “Human Flow” and Tuesday’s features combination of The Royal Ballet’s production of “The Nutcracker”and Sammy Hagar’s “Red ‘Til I’m Dead”. Finally, Wednesday starts a three night presentation of the anime film, “Black Clover.”

“Professor, I must give you back your ten shillings. You see, the cabber wouldn’t take any money, because he said he was going into some other business.”