Well September certainly has provided more thrills and chills than a Six Flags roller coaster, hasn’t it? During the first week of the month there were unconfirmed rumors of tumbleweeds blowing through multiplexes, then “It” charged onto the scene like bulls in Pamplona on the second weekend leaving September records strewn in its wake. Then, just for something completely different, we had the first wide release “F” Cinemascore in ages (from a director who this week claimed he meant to make a film that the majority of moviegoers wouldn’t like). In this box office game of throw-the-dart-and-see-where-it-lands, most in the industry predicted (as did we here at CJ) that this past weekend’s two new releases would undoubtedly account for at least USD $75 million worth of ticket sales.

Well so much for that. Because this is 2017, nothing is certain and unfortunately both “Kingsman: Golden Circle” and “LEGO Ninjago” came in below expectations with $39 million and $21 million respectively. It might be a wee bit unfair to consider “Kingsman” a disappointment as the people at Fox I spoke to over the past few weeks were all looking at a $35-40 million opening and that’s exactly where it ended up. But, good grief, what happened to “LEGO”? Talk about a declining franchise. The opening weekends of the three films in the LEGO stable have opened to, in order of release, $69 million, $53 million and now $21 million. Again we say, it’s fine to produce and release sequels but only if they’re sequels that your audience wants to see and that clearly was not the case here. A Cinemascore of B+ on an animated title doesn’t bode well either. The film opened in a handful of overseas territories and grossed a so-so USD $10 million.

“Kingsman” actually opened higher than its original but received a lower Rotten Tomatoes score (54) and a Cinemascore of only B+. The original’s international take was more than double its domestic haul and figure that trend to be mirrored again this time out. Speaking of the overseas market, the film debuted in 62 markets internationally and grossed a robust USD $61 million. That total was roughly 50% higher than the take for the first “Kingsman” film.

Lest we forget, there’s “Friend Request” which came in at the $2 million predicted in this space last week, not the $8-12 million that Entertainment Studios was projecting, presumably after spending a sensory enhanced evening with Woody Harrelson and Snoop Dogg. From a rather icky subject matter to a 21 RT score to a curious decision to make the film, aimed squarely at teen horror fans, an R rather than PG-13, “Friend Request” had little to suggest hitting the “accept” button.

Lastly, “It” remains a box office behemoth, adding an additional $30 million to the till which now adds up to a ridiculous $266 million here in North America. I have this vision of Pennywise sitting in a bank vault counting his money and filing his nails whilst he watches the rest of the September titles duke it out in some deranged kind of box office bumper car ride. As I mentioned last week, figure “It” to hang around through much of October and then be brought back for a lucrative Halloween week recharge. Side note, if you’re looking for something fun to do while handing out Halloween candy this year why not play the Celluloid Junkie It Drinking Game where you take a shot every time a kid comes to the door dressed as Pennywise. It may not be good for the liver but it’ll be a hell of a lot more fun than merely tossing Jujubes in the general direction of 6 year olds and for the 74th time that night asking “so what are you dressed as?”.

As for this week’s limited titles, Jake Gyllenhaal’s Boston bombing drama, “Stronger”, cracked the Top 10 with $1.7 million in only 574 locations and amassed a very, uh, strong 95 RT score.

The exclusives on “Victoria and Abdul” were solid with a $38,000 per location average (PLA). By the way, Dear Other Industry Publications, please stop using the dated phrase per screen average. This isn’t 1986 where movies played on only one screen in each complex. Come jump into the 21st Century pool, the water’s great. Also noteworthy is that the film continued a recent trend to have stars/directors do Q & A’s after showings on limited avail films in order to bump up their PLAs. It’s not dirty pool per se but we have to take these PLAs with a grain of salt, in this case knowing that Judi Dench and director Stephen Frears appeared at LA screenings this weekend. People love to see famous celebrities prattle on about almost anything. I went to a Q&A with Al Gore after “An Inconvenient Sequel” a few months ago and the rush to get down to the first couple of rows after the movie ended resembled the moment that the general admission seating section opened up at that infamous Who concert in 1977.

As of press time, Kirsten Dunst’s “Woodshock” had not released a weekend gross figure, never a good sign, however it did provide us with our CJ Review Quote of the Week from Henry Stewart of Slant Magazine who quips, “It becomes the obnoxious equivalent of trying to have a serious conversation with people who are high out of their minds.”

“Brad’s Status” added theatres this weekend and grossed a few tickets over $1 million.
Lastly, “Battle of the Sexes” got off to a decent, though hardly spectacular, start this weekend, grossing $525,000 in 21 theatres. The lion’s share of the gross came from New York and Los Angeles as areas like Chicago were just fair. The film expands this coming week and we will have to see how it resonates with the rest of the country. 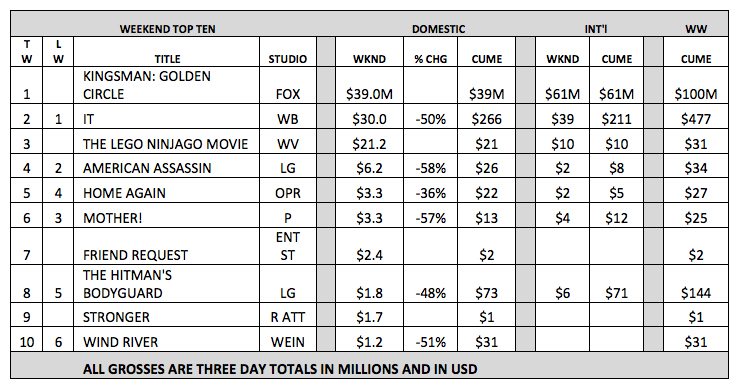 OK, let’s turn the volume knob to 11 and see what we have this coming week…

“American Made” (U)—Tom Cruise reunites with director Doug Liman for this (mostly) true story of an airline pilot who ends up flying covert missions for the CIA. Interesting side note, “American Made” continues the recent trend of Cruise starring vehicles with less than household names as his female co-stars. I’m not sure of the significance of this trend but Sarah Wright, who is Cruise’s co-star in this film, is hardly a household name either.

The other point worth noting is that this film, which remember is entitled “American Made”, has already opened in 50 international territories before opening here in the States, including such overseas powerhouses as Iceland, Cyprus and both Slovenia and Slovakia. Well at least we’re going to beat Tonga to the punch.

The Verdict: The aforementioned international phase of this release has netted more then USD $58 million which is OK without being exceptional. Comparing it to 2016’s “Jack Reacher: Never Go Back”, that film had grossed more than USD $75 million in its first four weeks overseas while this currently sits at the aforementioned USD $58 million at the same point in time. Just a reminder that the Jack Reacher sequel opened to $22 million and ended up at $58 million here in North America.

Cruise’s non-“Mission Impossible” films have been on a downward slide for the past several years and this film looks like it could be his first opening in the teens since 2012. The strong Rotten Tomatoes score should help but the TV spots and social media marketing feels very flat and I watched a cinema full of “Battle of the Sexes” moviegoers watch the trailer on Thursday and other than the guy in front of me with the “Trump 2020” t-shirt on, there was no response from the audience. USD $15 million.

“Flatliners” (Sony)—It’s the autumn of Déjà vu All Over Again at Sony with this remake coupled with the recharge of “Jumanji” at Christmas. Thank God no one in production over there looked through the vaults for remake possibilities and found an old 35mm print of “The Master of Disguise”. Where once we had a cast of Julia Roberts, Keifer Sutherland, Oliver Platt, Kevin Bacon and Hope Davis we now have Ellen Page, Diego Luna, Nina Dobrev and, yes again, Keifer Sutherland. If you don’t know the story, a group of medical students experiment with stopping their hearts to experience the afterlife.

The Verdict: The original opened to $10 million in 1990 and went on the gross $61 million here in the US. Ah the days of 6X multipliers. A remake can seldom be considered a success if it grosses the same as the 27 year old original and it feels like that’s where this current version is headed. USD $11 million.

ALSO OPENING
“A Question of Faith” (Pure Flix)—Faith based drama from the main player in that arena, Pure Flix. Moderate release plan.

“Battle of the Sexes” (FSL)—Expands this week.

“Til Death Do Us Part” (Novus)—Domestic thriller with Taye Diggs and Annie Ilonzeh. Moderate release plan.

“Mark Felt: The Man Who Brought Down the White House” (SCL)—Liam Neeson stars as Deep Throat. No, not that Deep Throat, the one from Watergate.

Abramorama has two limited openings, the Pearl Jam concert movie, “Let’s Play 2” and “Clive Davis: The Soundtrack of Our Lives”.

Also, expansions on “Victoria and Abdul”, “Stronger” and possibly “Woodshock”.

On the EVENT CINEMA front this week, Tuesday travels from the sublime to the ridiculous with both “Canaletto: The Art of Venice” and “Jeepers Creepers 3” (not on a double bill, thankfully). Thursday brings “Black Sabbath: The End of the End” and the biodoc “Steve McQueen: American Idol”. Lastly, the UK & Ireland have the “Pearl Jam: Let’s Play 2” concerts from Chicago’s Wrigley Field.