On Friday 15 September, California State University Northridge (CSUN) named a building in their Media, Arts and Communication Complex: Manzanita Hall – Hollywood Foreign Press Association Wing. This was done in honor of the HFPA which has donated funds to CSUN for equipment and students for the past 20 years, and this year donated USD $2 million in one grant to be dedicated for students from underrepresented communities in the industry, as well as upgrading the training facility.

The school has several departments dedicated to the myriad different aspects of movie arts, and at the event today introduced 20 students in various programs and at various stages of their studies there, directly due to the largess of the HFPA. (The HPFA has donated USD $26 million to various projects over the years, including USD $2 million to the LA City College Media Arts program in 2015.)

The event was highlighted by an interesting interview with five early members of the group – all who had been past presidents of the HFPA and are still reporting for their journals around the world. Aida Takaaki-O’Reilly, Jorge Camara, Noel de Souza, Mafouz Doss, and Philip Burk, told stories of the early days at the now gone Gardens of Allah and Coconut Grove Hôtels, writing out the invitations to the early Golden Globes Ceremonies themselves (Noel specializing in calligraphy, Aida licking the envelops).

One year they even did the production themselves when the sales of advertising was going too slowly. Jorge Camera described that to moderator Jenna Elfman (who attended CSUN before Hollywood grabbed her) as the year that got Dick Clark interested, which led to being carried on network television and which thereby allows their philanthropy.

Elfman provoked some excellent and often touching stories from the group, and effused grandly on how the foreign press most often asked the right questions, and how her Golden Globe award is front and center on her desk. The last question drew an ever increasingly relèvent message to the students in attendance passing from “stay focused” and “work hard” through “get in at the bottom and work your way up” to the final message of the event: Take responsibility for improving yourselves and the world around you with your craft and artistry. 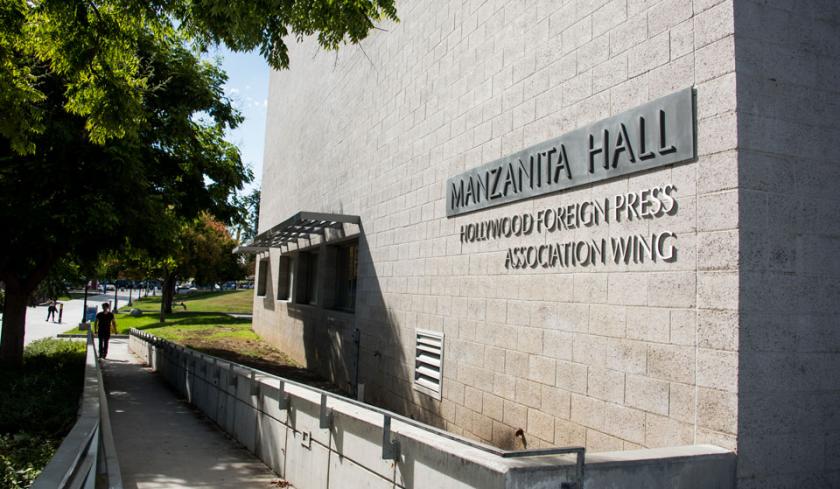 It is often noted that sound always gets the short stick in terms of attention in the order of things cinema – most all the work forced in the last few weeks of post production. But that places Exhibition in the game as having no stick at all. It was unmentioned in the litany of the President and Dean and Department Head’s presentations, and in a short post event interview with a CSUN professor – asking where exhibition stood in the schools programs – it was as if the question was where entanglement ranked in the students media studies.

Yet, for all the work of the crews of production, as well as pre- and post-, there is an amazing amount of work done after the studios push the product to the final lens at the cinema auditoriums. There are a lot of lightly trained individuals in the cinemas who could use some assistance, and an amazing amount of work from individuals who put a lot of time into volunteer organizations like SMPTE and Afnor among many others. Judging by complaints from individuals from cinema audiences, perhaps a concerted effort along the lines of obtaining grants like these into the exhibition space should be on our target list.