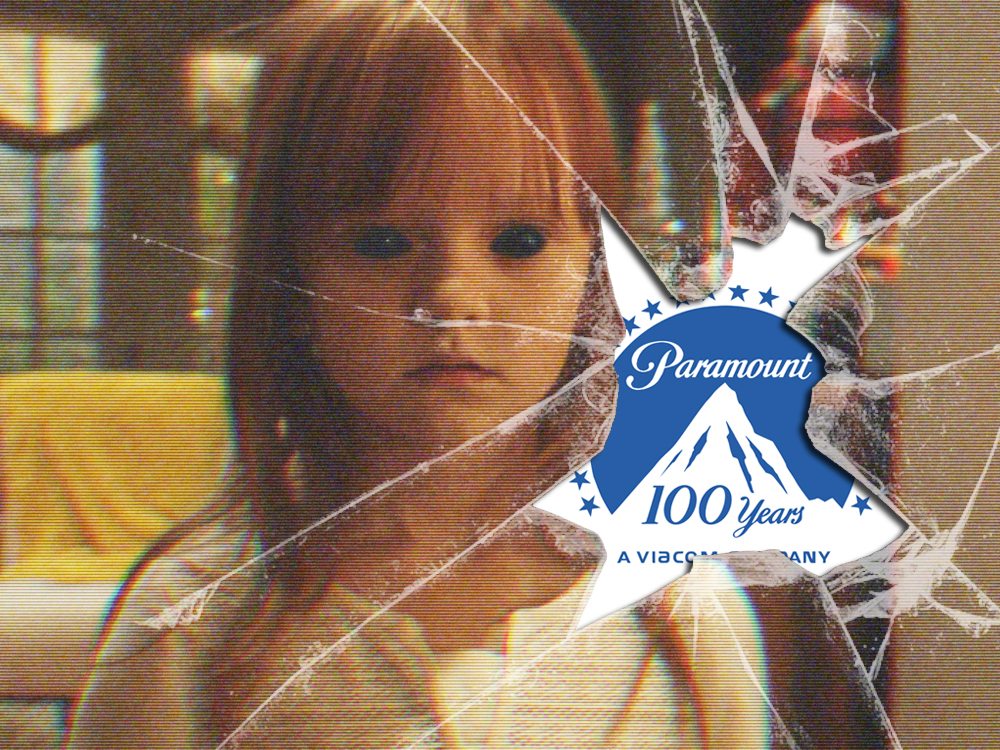 When we first set out to craft our analysis of the July announcement that Paramount Pictures would release certain movies on home video just 17-days after most theatres stopped playing them, we must admit to initially focusing on the wrong aspect, or participants, of the distribution experiment.

While most industry pundits pinned their coverage of Paramount’s plans to the erosion of theatrical release windows and the growing importance of video-on-demand to a distributor’s bottom line, we had written an educated think-piece (or post) on how few seemed willing or motivated to discuss whether a studio sharing revenue from digital downloads, even for a short period of time, would have a longterm affect on film programming patterns. Rather than basing our theories on the economic calculations that drives an exhibitor’s film booking decisions, we should have been concentrating our mathematical efforts further up the distribution chain to the studio itself. In doing so, we would have quickly realized that Paramount may not actually be able to move forward with its pilot of dynamic release windows, no matter how well intentioned it might be, without negatively impacting the box office gross of the two films participating in the trial.

Paramount Deal Points
On July 8th, the Wall Street Journal published a story outlining the broad strokes of an agreement Paramount had reached with two large North American cinema chains, AMC Entertainment in the United States and Cineplex in Canada, to allow for the early release of two upcoming films on digital home video. The deal was specific to two horror films being released in October; “Paranormal Activity: The Ghost Dimension” and “Scout’s Guide to the Zombie Apocalypse.” Ordinarily there is at least a 90-day window between the theatrical release of a film and its availability on home video, including early electronic sell-through (EEST), both exhibitors had agreed to let Paramount release these films 17-days after each were playing on fewer than 300 screens nationally.

If “Paranormal Activity: The Ghost Dimension”, which opens October 23rd, follows the historical release pattern of earlier films in the franchise, then it would fall below the 300 screen mark by its sixth week. This would mean by December 3rd, the horror film would have earned most of its theatrical gross and be played out, which makes sense given that Halloween is long over. At that point, a 17 day window would begin and Paramount could release the film on home video starting December 20th, 59 days after its theatrical debut and an entire month ahead of when the studio would normally do so. 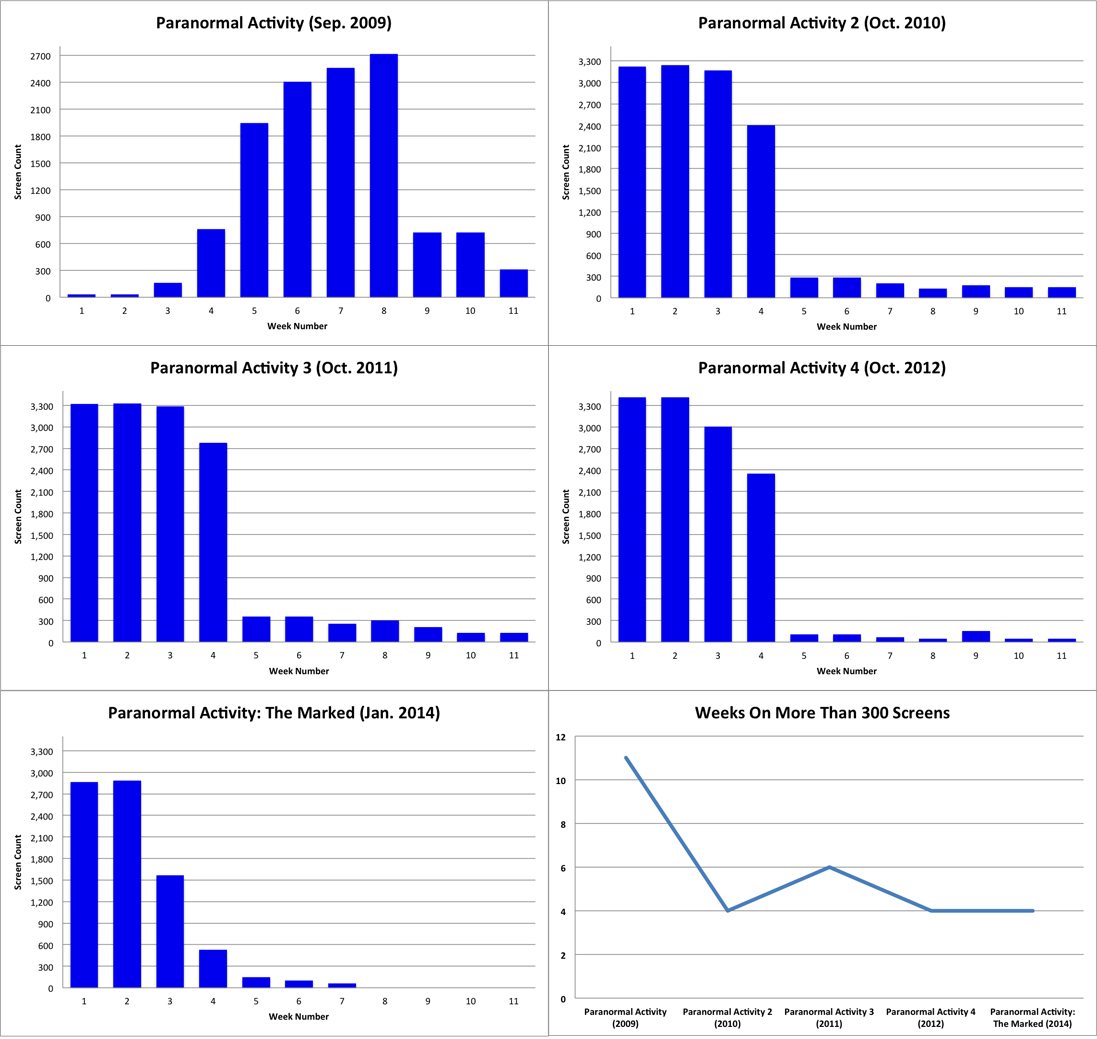 In the past, when distributors have announced a fast-follow home video release for upcoming titles, a majority of exhibitors have refused to book the movies. The Weinstein Company’s release of “Snowpiercer” serves as a perfect example. The well-reviewed film never opened on more than 350 screens where it earned USD $4.5 million. The distributor pointed out however, the movie grossed USD $2 million in its first week on VOD, which occurred two weeks after hitting theatres. Arguments were also made about how much it would have cost Weinstein to release the film wide on 2,500 screens and whether the hybrid strategy chosen was ultimately more profitable.

So why then would circuits like AMC and Cineplex, which have been reluctant (albeit more amenable) to showing films with shortened theatrical release windows, suddenly be willing to book such titles. What changed their minds? As usual, it comes down to money. Paramount negotiated with the chains to receive 10% of revenue earned from any digital sales of the movies for the first 90-days after their theatrical (not home video) release. Revenue share would be divvied up by market share of theatrical gross, which some see as a problem. (More on that later).

Industry Reaction
The response to Paramount’s announcement has been somewhat mixed.

Patrick Corcoran of the National Association of Theatre Owners was quoted as saying simply, “We have asked for years for studios to work with theaters on new models.” Though we’ve overheard some theatre owners suggest that NATO should have made a bigger or bolder statement, why would they? As Corcoran pointed out NATO has long requested studios work with exhibitors when experimenting with shortened release windows and here Paramount was doing just that. As well, both AMC and Cineplex are major members of their organization and both chains had agreed to participate. Ultimately, there is no space for NATO to say anything more for a number of reasons, if only to avoid anti-trust issues.

By July 31st, five additional exhibitors had signed on for the Paramount’s trial, including National Amusements, Southern Theatres (out of New Orleans), Alamo Drafthouse, Landmark Cinemas in Canada and iPic. This was viewed by some media outlets as theatre owners finally getting onboard with hybrid releases. Yet in looking at the list of exhibitors one can see it is filled with those who have already expressed a willingness to exhibit films with shorter release windows. Alamo Drafthouse was quick to show “The Interview” last December when it was released day-and-date on home video after the Sony Pictures cyber-attack. And National Amusements is owned in-part by Sumner Redstone, the head of Viacom which owns Paramount.

In fact, Paramount may have made a calculated error in making their plans public via the WSJ before solidifying deals with more exhibitors. Maybe the studio was trying to put pressure on exhibitors who might be on the fence to in signing onto the deal, but it had the opposite effect. The very next day it was made clear that Cinemark, the third largest theatre chain in North America, would not be playing the films, nor would Regal, the largest exhibitor in the world. Speaking during an earnings call Regal CEO Amy Miles said:

“We appreciate Paramount’s willingness to seek exhibitor input and provide for exhibitor participation in certain ancillary revenues as they evaluate alternative distribution models. However, the parameters of the current proposal, both economic and structural, simply do not make sense for us given the potential risks to the long-term health of our business.”

Translation? It’s really great that Paramount is willing to share home video revenue with exhibitors. Heck, every theatre owner in business today has long wanted to share in home video earnings dating as far back as the advent of VHS. But training our patrons all they need to do is wait two months, if not less, to see certain releases at home, rather than in the retail venues where we make the majority of our revenue, is not a consumer habit that we’d like to help establish. In the long run we want to help build a well established culture of moviegoing wherein patrons learn the best way to see any film is one of our cinemas. But thanks for asking.

Economic Recalculations
Originally we thought Paramount might be onto something. We even spent time trying to coin a phrase to describe the release strategy, nixing accordion release windows and hybrid release windows for the more accurate “dynamic release windows”. One of the major downsides that we identified, as previously stated, was that exhibitors might start crunching some numbers and realize they could make more money on the home video rev share by sending certain titles packing early, thus altering film programming patterns and prematurely shortening runs of titles that might otherwise have played out to higher box office.

It was in expressing what we thought were such wise views to various members of the industry that we were advised to rethink our theory and look at economic impacts not from the exhibitor’s point of view, but instead from the distributor’s standpoint.

Previous entries in the “Paranormal Activity” franchise have been released on upwards of 3,000 screens. With both Cinemark and Regal bowing out of showing the latest installment, it might be impossible to distribute the film as widely as Paramount would like. Keep in mind, AMC and Cineplex account for roughly 30% of box office, not market share. Earlier “Paranormal Activity” titles opening in October have taken in between USD $50 million and USD $80 million. Not bad for movies that cost about USD $5 million, though does Paramount really want to reduce that take 70% to between USD $15 million and USD $24 million? Probably not. 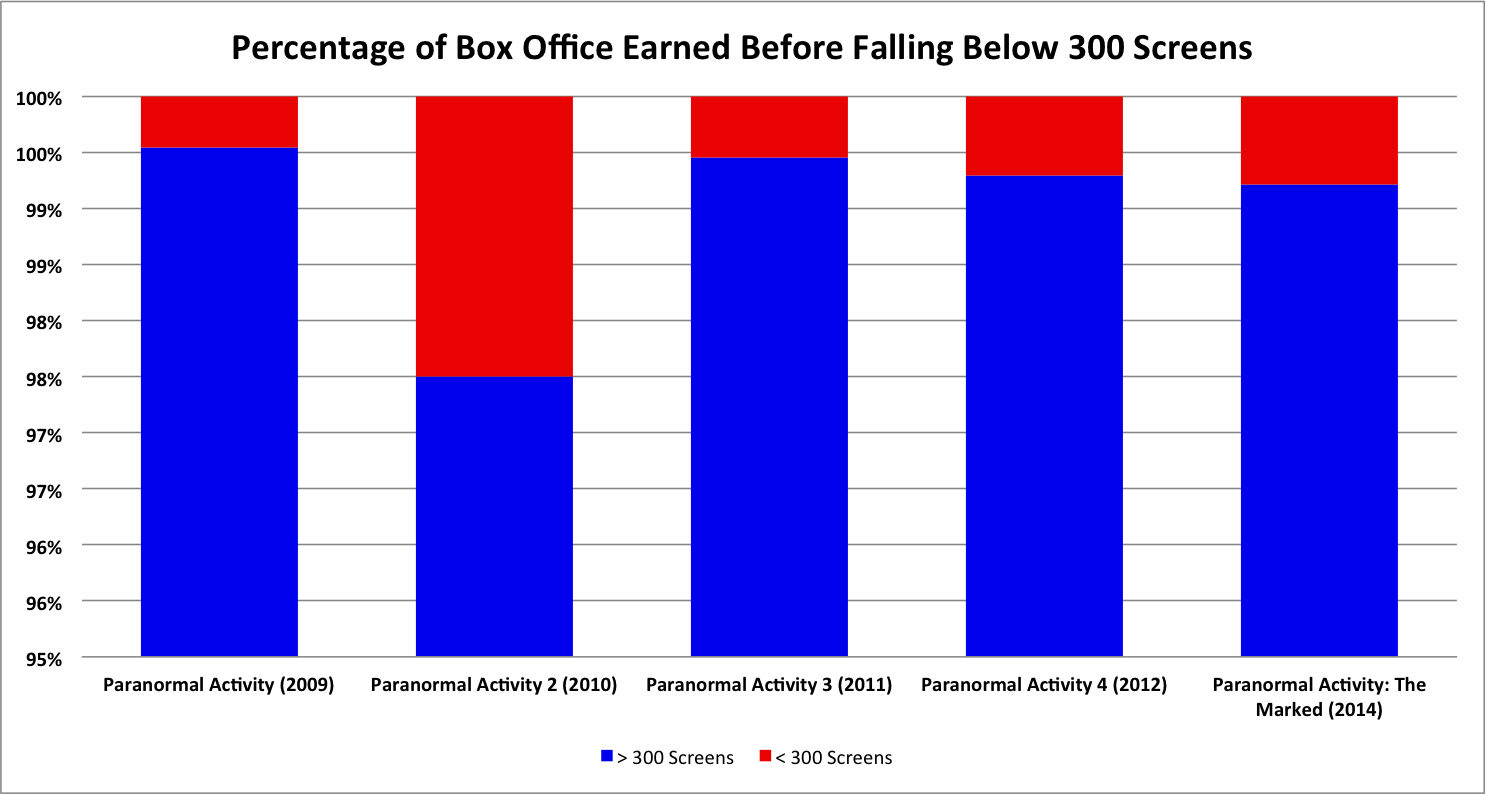 This is just taking into account straight box office numbers without regard to the knock-on affect to marketing efforts which may occur when a majority of North America’s cinema chains refuse to show trailers for either “Paranormal Activity: The Ghost Dimension” and “Scout’s Guide to the Zombie Apocalypse”. Let’s face it, both will do most of their business in-and-around Halloween and be played out by December. Releasing these titles on home video 60 days after bowing in cinemas would allow Paramount to maximize its theatrical marketing for both windows. That’s been the reasoning behind day-and-date or dynamic release windows all along. However the argument breaks down a little if movie theatres aren’t showing trailers for these films and helping with the theatrical marketing. As well, the smaller release will mean the studio will reduce its marketing spend in other media such as television and radio.

What theatre owners should be weary of is that many moviegoers are watching trailers online and thus a distributor may soon be able to reach their intended audience without having to rely on trailer placement in cinemas.

Finally, how do you think the filmmakers and talent behind such films would take to having the box office figures their compensation and bonuses are tied to may be in jeopardy? Better yet, ask their agents.

Practical Prognosis
Unless Paramount can get more exhibitors to signup for its dynamic release windows trial, and at this point it’s unlikely they will, the studio may have to call off its experiment. Which is a shame in some regard because at least Paramount is making a concerted effort to think of alternative distribution strategies and seems willing to work with exhibitors to pioneer new business models.

The theatre owners we spoke with, none of whom are participating in Paramount’s trial, voiced a number of concerns. One of the main issues was that home video earnings during the first 90-days would be disseminated based on the market share of how each title performed in cinemas. For example, a chain in which a particular release earned 25% of its theatrical gross would be given 25% of the portion of digital sales being shared with exhibitors. But what happens when the publicity behind a dynamic release window causes audiences in certain cities or markets to simply wait until a title hits home video? Exhibitors with a large market share in such regions could be disproportionally affected both during the theatrical release and when home video and VOD rev share was allocated.

Another worry was over who would be keeping track of the revenue generated from digital and VOD during the first 90 days after theatrical release. Most distributors don’t make such figures public and there appears to be little faith that this will change. Exhibitor’s comfort level on that front probably won’t increase until the reporting of home video revenue becomes more transparent.

Of course there were those cinema operators who felt 17-days after a title comes off of most screens was just too short a time to release a movie on home vide. But that just brings us full circle to the original debate of theatrical release windows.