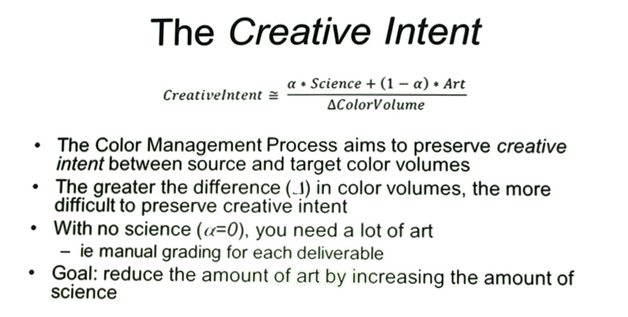 In a presentation at NAB’s Summit on Cinema, Robert Atkins of Dolby Laboratories’ Applied Vision Science Group showed a slide that was on the lips of everyone who saw it. As depicted above, the formula Atkins presented is an attempt to help understand the problem of utilising wider colour volumes in smaller or less capable implementations, i.e. content mastered in high dynamic range (HDR) but viewed on a non-HDR screens or screens that are not quite as capable as the target volume (ITU Rec BT.2020 to the P3 or ITU Rec BT.709 colour space).

The transition from film to digital has been a very contentious issue, giving rise to the feeling that the art of cinema has given way to technology and science.

As the transition to digital projection is behind us and with the industry having entered an innovation mode, a sense of technology for technology’s sake seems to hang in the air. Atkins’ slide simply got everyone talking about it all at once.

Below I want to discuss some of the future technology issues cinema will face and ask the questions; Are we sacrificing the cinematic art form for the advancement of science and how do these emerging technologies affect creative intent?

HDR/EDR
Wider colour gamut is part of the HDR story but in reality, does it need to be? If you are interested in cinema quality and the sacrifices taken to achieve it, you will likely be familiar with the following spectral locus: 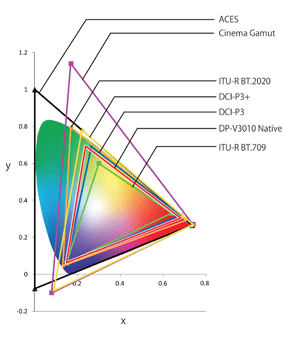 This diagram shows the spectral colours available in each standard. Current digital cinema colour gamut is denoted by P3 or DCI-P3 as seen in the image. You will see BT.2020 is shown and includes significantly more of the available colours and as such the visible light we can see.

BT.2020 is based on a target volume the industry hopes to achieve, whereas with P3 and BT.709 which came before it, BT.709, these volumes were based on the capabilities of the best displays at the time.

Today you may hear vendors quoting their monitors can display BT.2020, but look out for the asterisk. At NAB this year, Sony and Canon stated their best monitors where only 80% of BT.2020 colour space, i.e. not much more than the P3 colour space we already use.
Laser projection on the other hand gets us much closer, however the brightness limitations, speckle and metameric failure are unwelcome side effects.

Tests have also shown that the colours BT.2020 brings with it are typically colours we don’t like looking at, such as very bright fluorescents. Yes, you are probably picking up that I consider BT.2020 a science experiment. If we cannot actually make true BT.2020 monitors, how can produce content against them?

Art seems to be taking a back seat on this one, but it is still early days. We need more exposure and better screens. We do indeed need technologies like BT.2020 for scientific reasons, though will it ultimately advance cinema?

Immersive Audio
Cinema is already quite a long way down the track with immersive audio. Dolby Atmos and Barco Auro have a significant number of installations. Now, DTS showed up in the market with a new immersive sound format which launched at CinemaCon. At the NAB Summit On Cinema, a very interesting discussion between Brian Vessa of Sony, who is chairperson of the SMPTE working group on immersive sound, 25CSS, and Will Files, a leading sound designer from Skywalker Sound took up the debate of science versus art. The science here is largely worked out; a new file format containing a “standardised” immersive audio mix for a feature film is close to being published.

The contention on this issue is that the immersive format can theoretically render into any space with speakers at non-designated locations. That’s the scientific explanation, while the artistic argument would stake the claim that unless one has heard the mix in the exact configuration it will be played back on (speaker layouts), how can one be confident in a filmmaker’s intent?

Both Vessa and Files are correct but neither can get what they want.

This situation is a little more complicated since upgrading pre-existing cinemas to immersive sound can be extremely difficult. Pulling down walls or re-enforcing roofs is not feasible for everyone, yet often required to install Atmos. Bringing immersive audio to the masses may require a compromise or the acceptance that such compromises are required. In this case, art may very well have to let this slide.

Of course, cinema is more than art and science, it’s a business. Science is now a major part of cinema. The world is changing and the art of cinema will naturally need to change with it to keep up. Though we may now be in an era of innovation, we must continue to remind ourselves why we are all here in the first place.