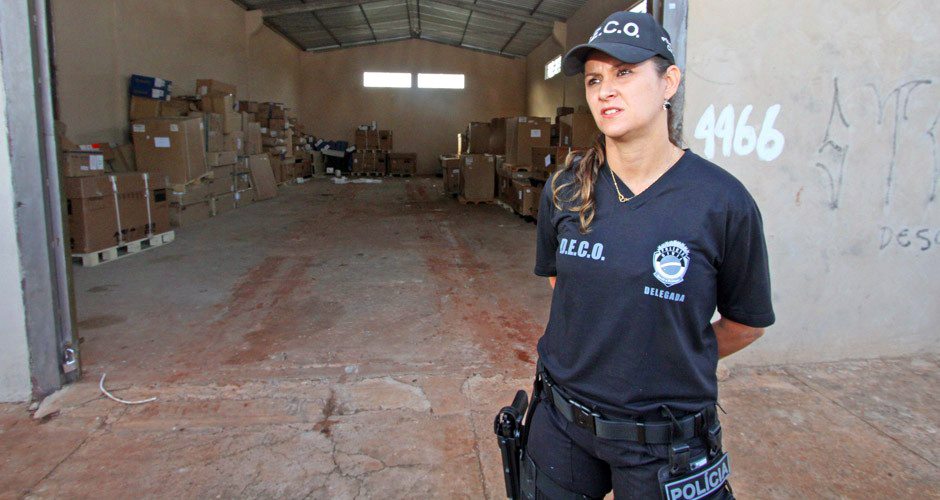 The Delegacia Especializada de Combate ao Crime Organizado (DECO) or Special Delegation to Combat Organized Crime, had been investigating the crime since February 19th when the goods would have entered the state of Mato Grosso Do Sul. According to Ana Claudia Medina, the DECO delegate in charge of the investigation, suspicion centered on the warehouse located at 4466 Rua Filomena Segundo Nascimento, the main street in Jardim Itamaracá a section of Campo Grande, the state’s capitol.

Search and arrest warrants were issued, before DECO moved in to search out the stolen goods, though no arrests were made. The owner of the warehouse where the equipment was found was unaware his facility was being used for criminal activity, having only recently signed a lease agreement with the alleged perpetrators. “He has testified and was discarded as a member of the gang,” said Medina of the warehouse owner. “Arrest warrants have already been ordered,” she added, though would not provide further details as the investigation is ongoing.

Authorities counted up to 31 Barco projectors in the warehouse and are awaiting “experts”, presumably from Quanta DGT to arrive and examine the equipment before tallying up the number of devices that had been located. Medina said, “There is at least BRL R$5 million (USD $1.71 million) in merchandise. Witnesses said they saw at least three trucks doing the downloading. I believe that the other equipment must be in another state.”

Medina’s theory is likely correct. In mid-February, roughly 44 screens worth of digital cinema equipment turned up in the back of a semi-truck near Morro do Papagaio in Belo Horizonte, the capital of Minas Gerais, one of Brazil’s 26 states. In that particular instance the discovery of the stolen devices occurred by happenstance after police pulled the truck over during a routine traffic stop. The driver of the truck managed to elude captivity.

The Campo Grande site is 1,300 kilometers away from the find in Belo Horizonte, at least 16 hours by car. It’s not much further to Quanta DGT’s facility in the Vigário Geral neighborhood of Rio de Janeiro where the digital cinema equipment was originally stolen. The value of all the stolen devices was estimated at BRL R$24.54 million (USD $9 million).

DECO officials speculate the robbery was pulled off by members of a large crime network, rather than individuals lacking such resources or skills. “What sets these people apart is that they are organized,” said Medina. “They have a person who is in charge, while others steal and others receive the stolen goods. That’s what sets them apart. The action of these criminals, to take something so meticulous, shows that they specialize in organized crime because they would need a means for the devices to work.”

In one month’s time, Brazilian authorities have managed to recover more than half the digital cinema equipment originally stolen from Quanta DGT.

Special thanks a tip of the hat to commenter Jester66 for tipping us off on this story.