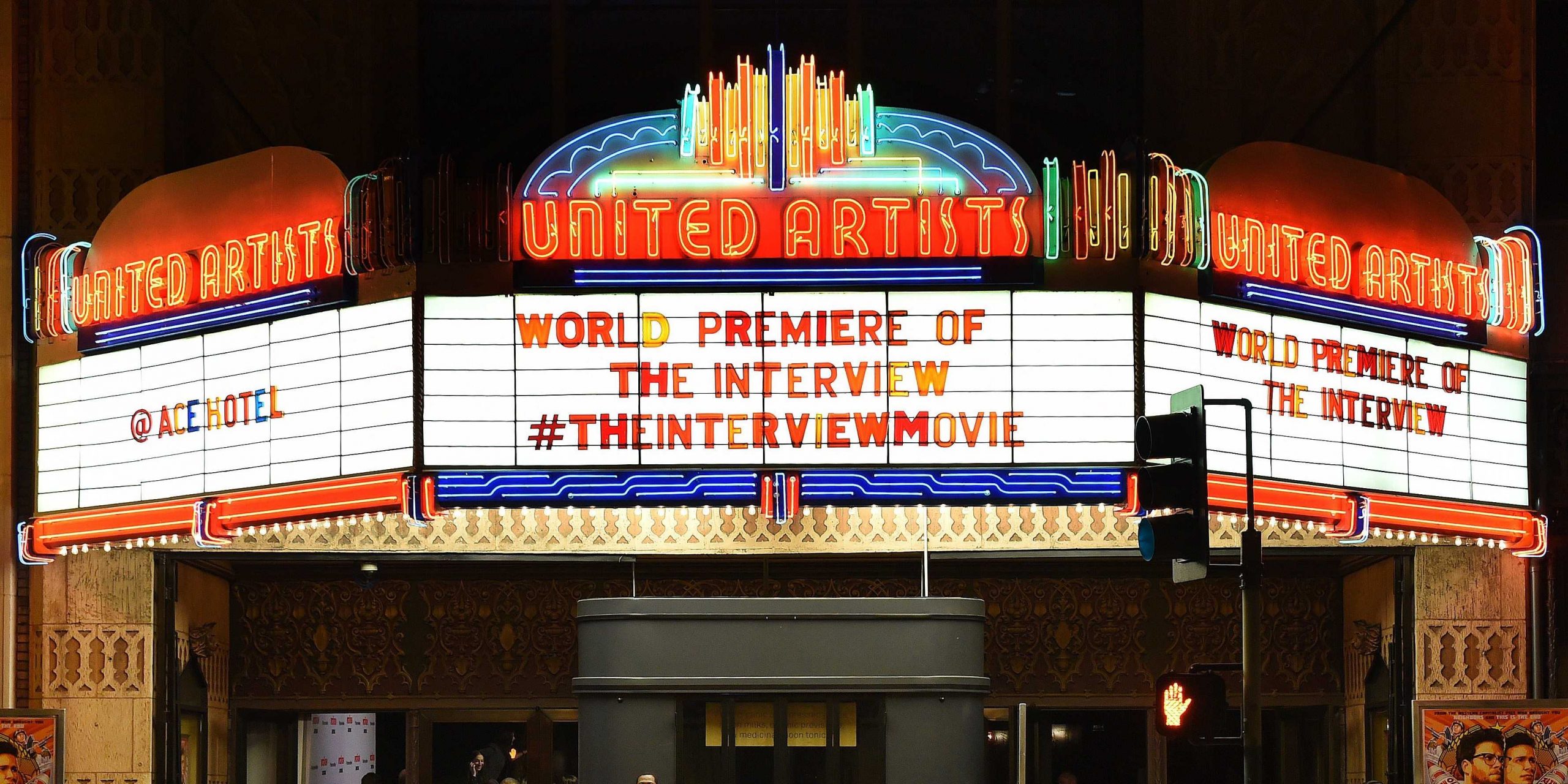 Though most of the entertainment industry and business world has been riveted to every breaking development of the Sony Pictures hack, we have purposely refrained from writing anything about it. That was until the perpetrators of the cybercrime threatened movie theatres showing an upcoming Sony film release with terrorist acts.

Yesterday morning, in what has become an almost daily ritual since news of the Sony hack first surfaced the group taking responsibility for the cyber attack, who call themselves the Guardians of Peace, sent an email which threatened:

“We will clearly show it to you at the very time and places “The Interview” be shown, including the premiere, how bitter fate those who seek fun in terror should be doomed to.”

The email went on to state that “The world will be full of fear” and referenced the 9/11 terrorist attacks in New York and Washington D.C. It suggested, in no uncertain terms, that moviegoers should stay away from movie theatres screening “The Interview” and those that live near such cinemas should evacuate their homes. No specific reason was given, however since the hack against Sony Pictures first occurred it has been widely speculated that North Korea might be responsible for the attack in retaliation for “The Interview”, a film Sony had scheduled to open Christmas day. The comedy featuring Seth Rogen and James Franco centers around a plan to assassinate North Korean leader Kim Jong-un.

As a media outlet focused on the motion picture exhibition and distribution industries we were among those who received the hacker’s daily emails. Over the past few weeks we could have used this site to dissect the notes of countless DCI meetings from the past ten years or even highlight the terms of Sony’s various virtual print fee (VPF) agreements, details of which were contained in the staggered distribution of Sony’s data. However, there is a reason such information was meant to be kept confidential and its publication serves no greater public need. As well, the commercial matters being discussed within such documents is ancient history and any interest in them would be purely academic at best. That our silence came with the advantage of not publicizing the hackers or their crime was an added bonus.

But when the perpetrators took aim at the general public, threatening innocent people in a venue this particular media outlet considers a place of secular worship, they crossed a line that even the most malicious hackers know to avoid. Virtual thievery in the anonymity of cyberspace gives victims the false sense they are not in direct danger of physical harm. Threatening terrorist acts upon specific people or places in a world still smarting from an endless string of such events panics a public with feelings of immediate personal danger. That’s what makes such threats so affective and why the Sony hackers’ intimidation of movie theatres is far more damaging than any of the data they leaked.

The biggest problem we have faced in writing about this latest development of the Sony hack, and the reason this post has been rewritten no fewer than seven times, is that the news is updating faster than we can type. This only goes to underscore just how seriously a terror threat is taken these days; once issued it must automatically be considered real, no matter how far-fetched. After you’ve seen planes loaded with innocent passengers slam into skyscrapers anything seems possible.

This is why we aren’t all that shocked Carmike Cinemas decided not to show “The Interview” within a day of the threat being issued. When Sony Pictures publicly told theatre owners they could drop the movie to avoid any potential violence in their cinemas, it was only a matter of time before other circuits followed suit. We did not think that every single major theatre chain, including AMC Theatres, Regal Entertainment, Cinemark and Cineplex Entertainment would pull “The Interview”, but in hindsight we should have. After all, would you want to be the theatre operator that didn’t take the hackers’ threat seriously only to have something horrible happen at one of your multiplexes? Especially since you were duly warned? No commercial interest would knowingly want to open themselves up to that kind of liability – financially or ethically.

Our first draft of this post urged exhibitors to remain calm not only because the Department of Homeland Security claimed there was no credible threat against movie theatres showing “The Interview” but also because no evidence had been produced linking North Korea to the Sony hack. Maybe the perpetrators were simply using all the rumor and suspicion over North Korea as cover for their own actions. Until yesterday’s emails the hack had never been tied directly to “The Interview”. And how could the hackers really pull off terrorist attacks at more than 3,000 cinemas?

We also recommended the FBI, or whichever department was handling the investigation into the hack, should divulge limited information about their findings thus far to confirm whether North Korea was actually a likely source. Silence, we argued, would only feed the notion that a foreign government was behind the hack.

Before we could even publish our revised post Sony had canceled their release of “The Interview” and the New York Times was citing anonymous U.S. government authorities tying North Korea to the hack. This in turn lead to an outcry from industry creatives and executives about how Sony Pictures and movie theatre owners caved in to the hackers’ demands, letting the “bad guys” win and setting a horrible precedent.

No doubt the move will be debated for years to come. Realistically, Sony didn’t pull “The Interview”. When exhibitors who traditionally make up more than 50% of your opening weekend box office gross decide not to show your USD $50 million film, it becomes impossible to widely release it in any profitable manner. In other words, the decision was made for Sony by exhibitors after the studio let them off the hook for showing it.

While it remains to be seen how accurate the link to North Korea is, that there has been no further distribution of Sony’s hacked data is somewhat telling. If true the fallout will go far beyond Hollywood. Who knows, maybe Sony’s insurance will only cover their mounting loses if a rogue foreign government body was responsible for the hack.

If there is one positive note we can take to heart as an industry – if that’s even possible in this instance – maybe its that it proves just how important movies are to our global culture that someone would bother to pull off such a complicated hack in hopes of preventing the world from seeing a single film.