Two marketing emails from large cinema chains appeared in my inbox during the month of September both of which proved effective, at least for me. Rather than quickly scan them before relegating them to the trash bin, I actually took the rare step of following their calls to action. Maybe you’re wondering what promotional wizardry got me to respond to a marketing email. Or perhaps, you haven’t even made it this far into the story because, much like marketing emails, you stopped reading after the first two sentences.

The first email (shown above) was sent by Regal to members of the circuit’s Crown Club loyalty rewards program. It arrived with the subject line “Free Movie Download With Cloudy 2 Ticket Purchase!” While I had zero intention of seeing “Cloudy 2”, the offer stood out in my mind to such a degree that when my daughters asked if I would take them to see the movie last weekend, I didn’t hesitate to say yes (much to their surprise and joy).

As the lights dimmed and the trailers began I realized the only reason I agreed to see the film at all was due to the promotional offer. Of course, I silently assured myself that it was also to spend time with my daughters and to give them an unexpected treat.

The offer from AMC (shown below) was even better because it didn’t require customers to make a direct purchase. The company sent out an email to members of their Stub’s loyalty program with the subject “Special STAR TREK gift for members only!”. Inside was an exclusive member offer to download the 2009 “Star Trek” film from iTunes as part of a marketing campaign to promote the release of “Star Trek Into Darkness” in the iTunes store. 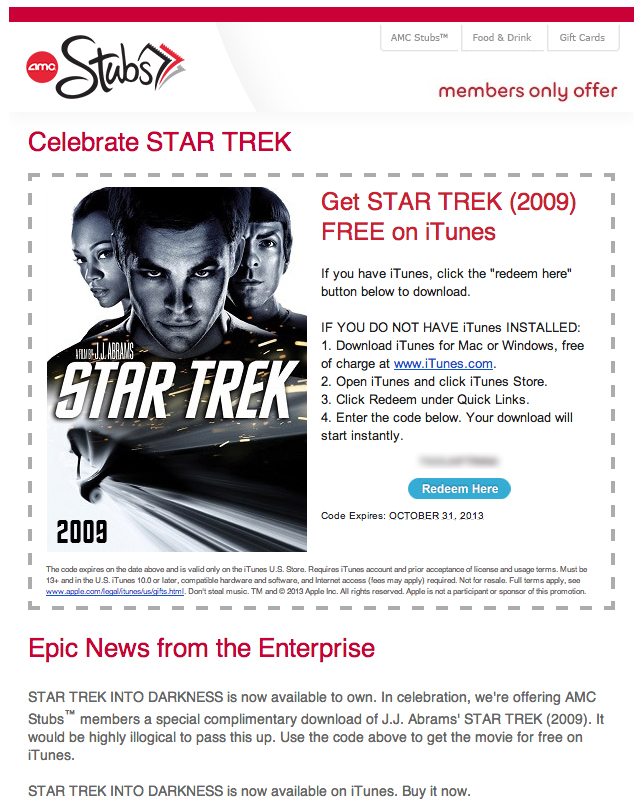 So, why did these marketing emails work? What made them so effective for me, and presumably anyone else that likes free movie downloads? Why do I hope AMC, Regal and other exhibitors continue such promotions? Here are a couple of key success factors each campaign employed, some of which will be recognizable as standard marketing strategies:

Copywriting
The first aspect of any email marketing campaign is the first item someone receiving such emails will see; the subject line. Without a compelling subject a marketing email may never even be opened and be sent directly to the virtual trash bin instead. The emails from AMC and Regal both contained subjects that made me open them.

Graphic Appeal
Once opened, a marketing email must not immediately turn off a prospect by throwing a ton of text at them. AMC and Regal used images to relay information about the promotion. Accompanying text was minimal, concise and had direct calls to action. This also speaks to copywriting.

Free
Who doesn’t like “free stuff”? And in a digital world, where we don’t even have to find space on bookshelves to file away another DVD or Blu-Ray disc, our “hoover and hoard” instinct kicks and we tend to say “yes” to most everything that comes with the word free. Even if we never plan on using whatever it is being offered, there is little physical consequence for accepting a digital item.

Exclusivity
Both marketing campaigns were directed at members of each circuit’s loyalty rewards program. The promotions wisely made customers feel special for being members. By providing an unexpected benefit only available to “insiders” each campaign served up that feeling of “delight” so many companies try to achieve with customers. This is more the case with AMC not only because no purchase was necessary, but also due to the fact that the company charges USD $12 per year to be a member of its Stubs program and such promotional offers are examples of value justification.

Ease of Fulfillment
Customers hardly had to do anything to participate in the offering. These days almost everyone has an iTunes account. Other than clicking a button and entering an iTunes username and password there was limited effort required. Granted, I had to purchase tickets through Fandango for “Cloudy 2”, though likely would have done so anyway.

Content
Last, but not least, “Star Trek” and “Cloudy With A Chance of Meatballs” were two popular, enjoyable movies. As with theatrical releases, it’s all about the content.