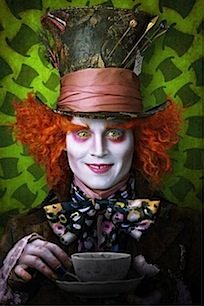 Surely Walt Disney Studios was hoping their upcoming release “Alice In Wonderland” would generate a lot of media attention before it hits theatres on March 5th, though they probably weren’t trying to create the kind of buzz the picture received over this past week. Theatre owners in North America and Europe protested when the studio announced it would move up the DVD release of the movie to early June, just three months after Tim Burton’s adaptation of Lewis Carroll’s classic is distributed theatrically.

The announcement was made on February 8th by Disney’s CEO, Bob Iger, during an earnings call and seemed to come as a surprise to many. A surprising number of newspapers, websites and radio shows beginning running numerous stories about the dispute just two days later and through the course of last week. In fact, the Los Angeles Times managed to sum up the latest battle over movie release windows rather nicely:

The flare-up illustrates how an arcane topic once only of interest to Hollywood executives can affect moviegoers around the world.

The L.A. Times, along with The Wrap, touched on the fact that studios have been meeting with key North American exhibitors (probably Regal Cinemas, AMC Theatres and Cinemark) to negotiate a deal on shortening theatrical release windows. These meetings weren’t done surreptitiously. In January John Fithian, President of the National Association of Theatre Owners, told attendees of the International Cinema Technology Association’s tech conference that theatrical windows would be changing to help studios maximize revenues from home releases:

“As a person who represents the cinema industry I’m not going to tell you that we’re very happy that that model is going to change, but it has to. But it has to change logically and it has to change with studios and exhibitors sitting down together and analyzing the models. It’s not a great secret, this is happening. Leading studio executives, leading cinema representatives are talking about what these models should look like. The good news is we’re all at the table talking. That’s much better and much more cooperative than if studio x decided just to abandon the model and release a major picture in the cinema and in the home roughly at the same time. That’s not going to happen. What’s going to happen is some scientific thinking and some research and a deliberative process to maximize the model for the studios without killing the model for exhibition.”

So some North American exhibitors knew in advance of Iger’s announcement that Disney wanted to move up the DVD release of “Alice In Wonderland”, though certainly not all of them. And according to my conversations with exhibitors who had been in the loop, Disney was only looking to move up the DVD release date of “Alice”, not all of their subsequent releases. However, based on Iger’s comments both during the earnings call and a follow-up interview on cable news network CNBC, some cinema operators now fear a wider move is afoot at Disney and that other studios may follow suit:

“The problem with waiting these days is that you’re dealing with a much more competitive marketplace than ever before. The sooner we put a product into the marketplace — the less vulnerable we are to piracy.”

This kind of talk forced Walt Disney Studios Distribution President, Bob Chapek to release a written statement explaining that the shortened theatrical release window for “Alice In Wonderland” should not be taken as a signal Disney’s plans for future releases:

European exhibitors were especially stunned by the news as it appears nobody from Disney had been meeting with them the way they had in the United States. Chapek sped off to the United Kingdom last week to conduct some damage control with specific exhibitors.

The top three chains in the U.K. all threatening to boycott “Alice In Wonderland” if Disney stuck to its DVD release plans. By the end of last week Cineworld, the U.K.’s third largest cinema chain, announced they had reached a private agreement with Disney and would show the film in their theatres.

Odeon and Vue, the country’s number 1 and 2 exhibitors had not reached a deal by the weekend and even went so far as to pull the film’s trailer from theatres. (There were a few reports Vue came to an accord with the studio since Friday.) Then today, Odeon confirmed publicly it would boycott “Alice In Wonderland” over Disney’s decision to release the film on DVD so soon, claiming it would:

“…inevitably set a new benchmark, leading to a 12-week window becoming rapidly standard… Odeon/UCI has invested considerable sums of money, especially in the UK, over the past 12 months to install digital projection systems in its cinemas. The proposed reduction in the window on a high-profile 3D title like Alice in Wonderland undermines the investment made.”

Exhibitors in the United Kingdom aren’t the only ones that are planning such extreme measures. Most of the theatre owners in the Netherlands don’t plan on showing “Alice In Wonderland” either. Speaking to AFP Youry Bredewold of Pathe and the Dutch National Board of Cinema Owners stated:

“We decided we need to send a message to the whole industry: if you don’t accept our terms we will never show your movies again.”

Ad Westrate, president of the International Union of Cinemas in Europe told the L. A. Times:

“I’m getting e-mails from my colleagues all across Europe and everyone says … this is one step too far. The guys are really fanatic now.”

Meanwhile, AMC Theatres in the U.S. may be taking a lesson from their counterparts in Europe. This morning, the L.A. Times reported that the second largest cinema chain in the world was “digging in its heels” over the “Alice In Wonderland” release window dispute and has not yet agreed to play the film. With more than 4,500 screens, mostly in North America, that could be the one straw that forces Disney to delay their plans for an early DVD release of the picture.

Even if Disney does cave in to pressures coming from exhibitors over the release window for “Alice In Wonderland” and delays DVD release of the film, this is an issue that will continue to rear its ugly head more and more in the near future. Warner Bros. is already talking to theatre owners about releasing the DVD for their animated film “Guardians of Ga’hoole” 86 days after its September 24th release, in time for the holidays. Last year, most cinema chains pulled Sony Pictures animated film “Cloudy With A Chance of Meatballs” when the studio said it would allow those who owned Sony televisions with Internet access to view the film a full 30-days before its release on DVD. In addition, Paramount Pictures ruffled feathers by releasing “G.I. Joe: The Rise of the Cobra” on home video less than three months after it premiered in theatres.

And it should come as no surprise that Disney seems to be leading the charge for the studios on release windows. As far back as 2005 Iger has said he wanted to shorten the release windows. Combine that with Chapek’s promotion at the end of last year as the head of all the studios’ motion picture distribution efforts. Chapek’s previous position? President of Walt Disney Studios Home Entertainment.