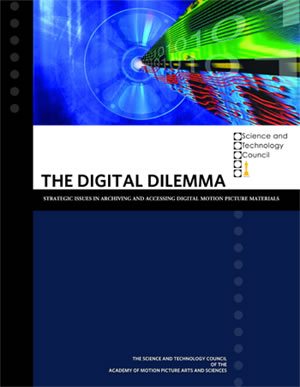 “The Digital Dilemma”—a 2007 report from AMPAS’ SciTech Council that examines the challenges of archiving and accessing digital motion picture materials—was the subject of the SMPTE’s Hollywood Section May meeting, held at the Academy’s Linwood Dunn Theatre in Hollywood.

The report concludes that there is no long-term strategy for archiving and preserving digital assets that doesn’t require large capital investment.

Andy Maltz, director of the SciTech Council, reported that in 2008 the worldwide box office reached $20 billion, but he estimated that only 0.0015% of that amount was spent on addressing this dilemma. He emphasized that much more needs to be done.

During the evening, Maltz presented an overview of the report and an update on its impact since its release. He generated applause and laughter from an audience that has been inundated with 3D format talk when—in outlining the discussion objectives—he quipped “there will be nothing about stereoscopic movies tonight.”

Actually, he wasn’t entirely correct. He addressed AMPAS’ need to preserve digital content, citing as an example the increasing number of 3D titles that originate from and are/will be released in the digital realm. He also cited the ASC/DCI Standard Evaluation Material (Stem) and all Oscar-nominated films, which are archived by the Academy.

“Current technologies and practices are inadequate,” he said. “Periodically you will need to copy the digital media. Storage technology and operating technology will become obsolete.”

As to current investment, the report suggested that it costs $1,059 to preserve one film archival master for one year. In contrast, it estimated that annual cost of preserving a 4K digital master to be $12,514.

The SciTech Council is now working on what it calls a Digital Motion Picture Archival Framework, which would include the development and standardization of a file format, directed research, education and a follow up report on “The Digital Dilemma” for indie filmmakers and executives at public archives.

A very worthwhile read, “The Digital Dilemma” report can be downloaded from the AMPAS web site (here).