Ymagis Group (ISIN: FR0011471291, TICKER: MAGIS, PEA-PME eligible), the European specialist in technologies for the cinema industry, today reported its consolidated revenue figures for the third quarter of 2016 and first nine months of the 2016 fiscal year ended on the 30th of September. 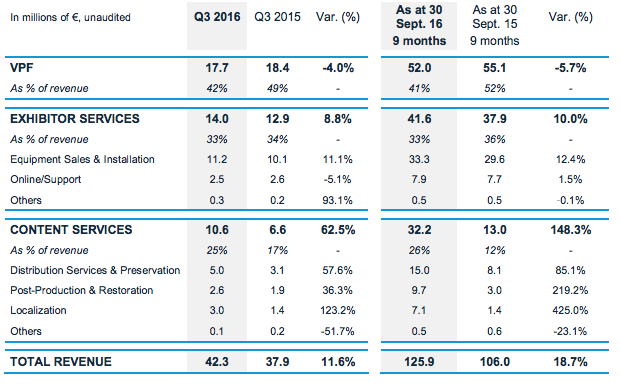 In line with the Group’s strategy, its services business units have positively impacted third quarter revenue, compensating for the anticipated decrease in profits generated by the VPF business unit due to the end of the financial model in Austria and Poland at the end of last year.

The Exhibitor Services business unit, which includes consolidated revenue from acquisitions Proyecson (Spain) and R2D1 (France), reported a significant increase in sales in the third quarter 2 with revenue of €41.6M for the first nine months of 2016 as of 30 September. While the replacement of first-generation digital projection systems has not yet been implemented, the market remains favorable with new cinema builds and sustained investments by cinema exhibitors in new image and sound technologies, resulting in an increase of 11.1% in revenue generated by the Equipment Sales and Installation businesses for the third quarter and 12.4% for the first nine months at €11.2M and €33.3M, respectively. Business is particularly robust in the United Kingdom, the Netherlands and Austria. The Online and Support Services reported stable third quarter revenue at €2.5M, and €7.9M for the first 9 months of 2016.

The Content Services business unit continues to report strong growth across its divisions with a +62.5% increase in revenue for the third quarter of 2016 at €10.6M compared to €6.6M for the prior year period, primarily due to recent acquisitions, including but not limited to Eclair in August 2015. For the nine-month period ending 30 September, the business unit’s revenue has multiplied by 2.4 at €32.2M. The Distribution and Preservation divisions recorded increased revenue of €5M in the third quarter of 2016, up from €1.8M in the prior year period, and has grown from €6.9M to €15M for the nine-month period, thanks in large part to the acquisition of Cine-Logistics (Germany) at the start of the year. The Post-Production and Restoration divisions recorded a significant increase in revenue for the first nine months at €9.7M compared to €3M for the prior year period, driven primarily by the integration of Eclair businesses. Finally, the Localization division reported revenue of €3M for the third quarter, up +123.2% compared to €1.4M for the prior year period, largely due to the consolidation of Eclair’s activities as well as the acquisition of ST’501 (France) and CKS (Germany), which have contributed to the increase in sales revenue at €7.1M since the start of the year compared to €1.4M the prior year.

As a reminder, this past October Ymagis Group released its strategic three-year plan, Perform 2020, detailing its strategy for a profitable growth of its business..

Following a three-year period of strong external growth that saw Ymagis quadruple its revenue, today the Group has the necessary financial and operational resources at its disposal to sustain its growth despite the anticipated end of its VPF business.

In its position as a European leader, Ymagis Group is working toward an annual revenue growth rate of at least 10% within its Exhibitor and Content Services business units. In light of the rationalization of its operations, the Group expects to quickly see profits generated by Eclair’s activities, consolidated in its Content Services business unit, for an anticipated profit before taxes of 5% across the entire Group by 2020. Ymagis Group also avails of additional growth vectors through its technological innovations such as EclairColor, which launched in late September 2016, and its continued targeted external growth.

Ymagis is a European leader in advanced digital technology services for the cinema industry. Founded in 2007, the Group is headquartered in Paris and has offices in 23 countries with nearly 700 employees. Our core business is structured around three main units: CinemaNext (exhibitor services: sales and field services, software solutions, customer service/NOC and consulting), Eclair (content services: post-production, theatrical delivery, digital distribution, versioning and accessibility, restoration and preservation) and Ymagis (financial services). For more information, please connect to www.ymagis.com, www.cinemanext.digital or www.eclair.digital