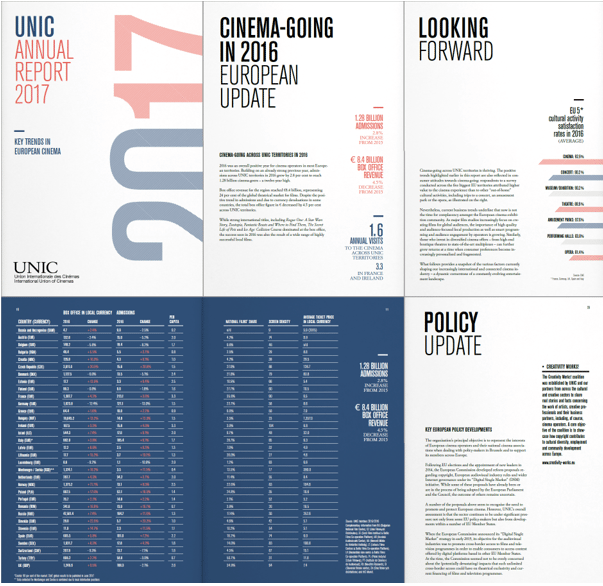 One week before CineEurope, its official annual convention, the International Union of Cinemas (UNIC), the grouping of European cinema associations and key operators, has today published its Annual Report, examining key trends and developments in across the 36 territories represented by the association over the last year.

The report – available in English and French – provides a detailed analysis of the various factors shaping an increasingly international and connected cinema industry.

In 2016, total cinema admissions in the region increased by 2.8 per cent, reaching more than 1.28 billion. This translated into total box office revenue of €8.4 billion – 24 per cent of the global theatrical market for films – confirming once again the importance of Europe as a key building block of the global film industry.

These positive results demonstrate how cinema-going in Europe has become an ever more engaging, diverse and immersive experience thanks to creative entrepreneurship and ongoing investment in innovation by cinema operators and their business partners.

Alongside a range of sector data, the report also examines a number of public policy issues affecting cinema operators in the EU and sets out the advocacy activities undertaken by UNIC in response.

As governments and industry leaders across Europe come together to examine how best to equip the European film sector for future business and audience growth, UNIC will continue to work alongside industry colleagues and European policy-makers to promote a fair, competitive and culturally diverse cinema ecosystem.

UNIC looks forward to exploring the different trends highlighted in this report next week during CineEurope, its official convention, which will take place from 19 to 22 June in Barcelona, Spain.

The UNIC Annual Report 2017 is available in English and French and can be downloaded online: English version / French version

CineEurope
Organised in partnership with the Film Expo Group, CineEurope – UNIC’s official annual convention – each year brings together cinema professionals from over 50 countries. The 2017 edition of the show takes place from June 19-22 in Barcelona and involves a growing number of film and product presentations from major international as well as European film studios, a cutting-edge trade show, as well as a seminar programme exploring latest industry trends in European cinema exhibition.