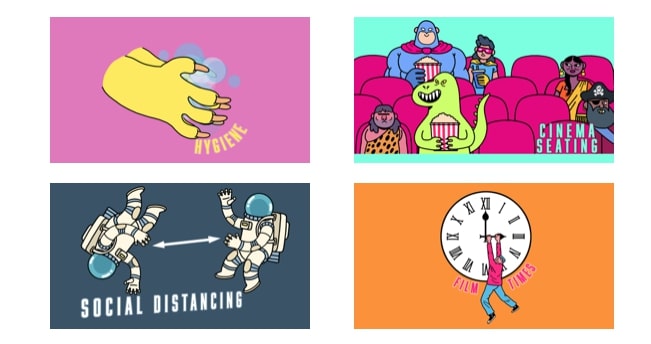 The UK Cinema Association has today launched a campaign to explain the safeguards UK cinemas will have in place to help protect audiences as they start to open over the coming weeks and months.

With cinemas in England having been able to open from 4 July, those in Northern Ireland from 10 July and those in Scotland opening from tomorrow, the Association wants to offer everyone considering a return to the cinema reassurance on the steps that all venues will be taking to deliver a safer big screen experience.

The campaign is based around two ‘infomercials’ setting out the key measures to be taken. These will be used – alongside a host of other digital assets – on cinema and industry partner websites and social media channels, as well as on the big screen itself as sites re-open.

With a common script, both infomercials explain the range of social distancing, hygiene and other protective measures that will be taken, closely following the advice set out in the Government-approved safeguarding guidelines – Cinemas – keeping workers and customers safe during COVID-19 – published by the Association on 25 June.

‘We know from our own as well as other surveys that there is an overwhelming desire amongst cinema-goers to return to the cinema as soon as they can, but equally that they and others want to understand and be reassured as to the safeguarding measures that will be in place when they do.

We hope that the adverts we’ve launched today will offer that reassurance. The steps that all cinemas will take to protect both audiences and their teams are we think the right ones to help ensure that we will be able to deliver a safe but still enjoyable big screen experience.’

The UK Cinema Association (UKCA) represents the interests of over 90 per cent of UK cinema operators by number and market share. Its membership ranges from single screen/owner managed sites to the largest circuit and multiplex operators.

The two ‘infomercials’ can be found on the UK Cinema Association youtube channel here: https://www.youtube.com/channel/UCLtxmxF-BvUFY1GMmf7ewDQ/

The informercials were created by the agencies Feref (‘UKCA1’ – www.feref.com) and Monkey Puzzle (‘UKCA2’ – www.monkey-puzzle.net).

Key assets derived from the two creative pieces, circulated to Association members for use on their websites, social media channels and cinema screens, are attached.

The Film Distributors’ Association (FDA), representing film distributors in UK and Ireland, has been undertaking a regular survey of cinema-goers’ attitudes towards the return to the big screen. Key findings include that: