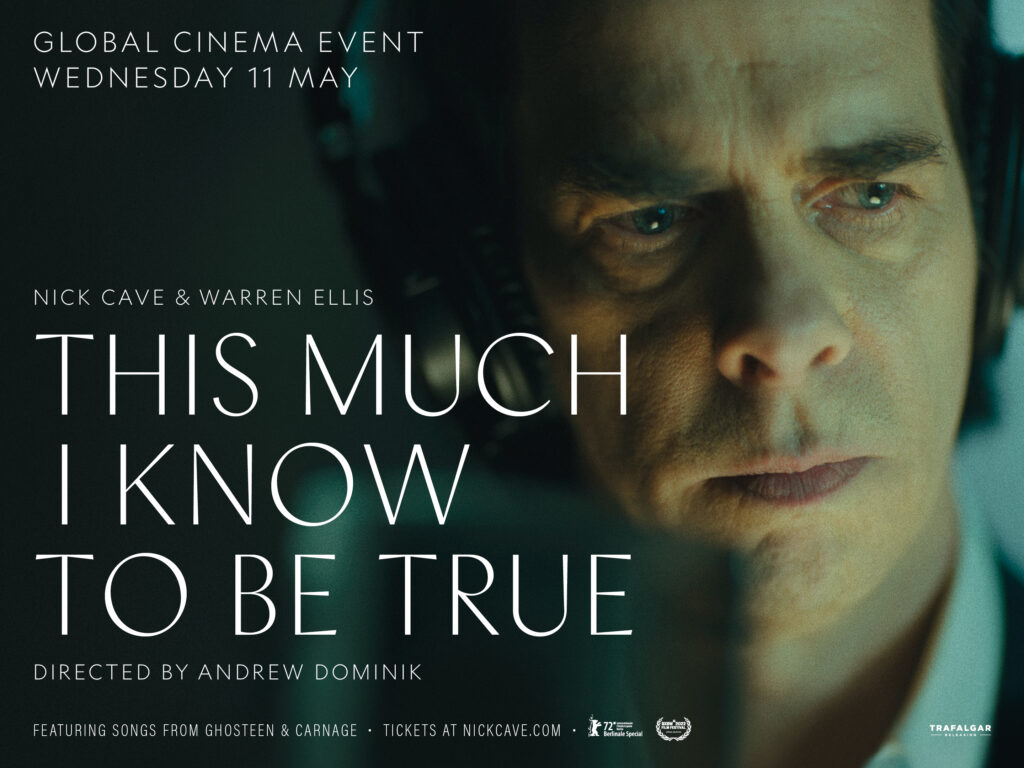 Trafalgar Releasing will bring Andrew Dominik’s “This Much I Know To Be True” to cinemas worldwide this May, following its critically acclaimed world premiere at the Berlin Film Festival.

Tickets will go on sale on 23 March for the 11 May global cinema event. Details to follow on nickcave.com.

Marc Allenby, CEO of Trafalgar Releasing, comments “We’re honoured to be working on “This Much I Know To Be True”, our fifth cinema release with Nick Cave and his team, and our second with Andrew Dominik following “One More Time with Feeling”. The relationship between Nick and Warren has been such a compelling element of their longstanding musical collaboration, and Andrew’s film has flawlessly captured this. The reaction from the Berlin Film Festival has been overwhelmingly positive, setting up our global event perfectly, and we’re excited to present the film to audiences around the world on May 11.”

Shot on location in London & Brighton, “This Much I Know To Be True” captures Nick Cave and Warren Ellis’ exceptional creative relationship as they bring to life the songs from their last two studio albums, “Ghosteen” (Nick Cave & the Bad Seeds) and “Carnage” (Nick Cave & Warren Ellis).

In this document of their first ever performances of these albums, filmed in spring 2021 ahead of their UK tour, we see the two, accompanied by singers and string quartet, as they nurture each song into existence. The film features a special appearance by close friend and long-term collaborator, Marianne Faithfull.

Interstitial pieces between the songs illuminate the cosmology and themes of the music. We hear about the process of Nick writing The Red Hand Files — the letters he chooses to answer and the replies themselves – giving us an insight into his current concerns in life and music, and into the method by which he is able to bring his own thoughts and feelings into order. We also visit the workshop where he is creating a series of sculptures depicting the life of the Devil — a portrait of the lives of all of us as we move from innocence to experience, attune to the world and its attendant loss, and eventually confront our own mortality.

“This Much I Know To Be True” reaches into the deep friendship and personal relationship between Nick Cave and Warren Ellis, something glimpsed in the 2014 Cave pseudo-documentary, 20,000 Days on Earth. The film will prove to be another significant moment in the journeys of Nick Cave and Warren Ellis, capturing the mood and spirit of the pair as they move through a new, optimistic phase.

Shot in colour by Andrew Dominik (Chopper, The Assassination of Jesse James by the Coward Robert Ford, Blonde) and with cinematography by Robbie Ryan (The Favourite, Marriage Story) “This Much I Know To Be True” is a companion piece to Dominik’s 2016 film “One More Time with Feeling” which premiered at the Venice Film festival followed by screenings in 850 cinemas across 30 countries, also distributed by Trafalgar Releasing.