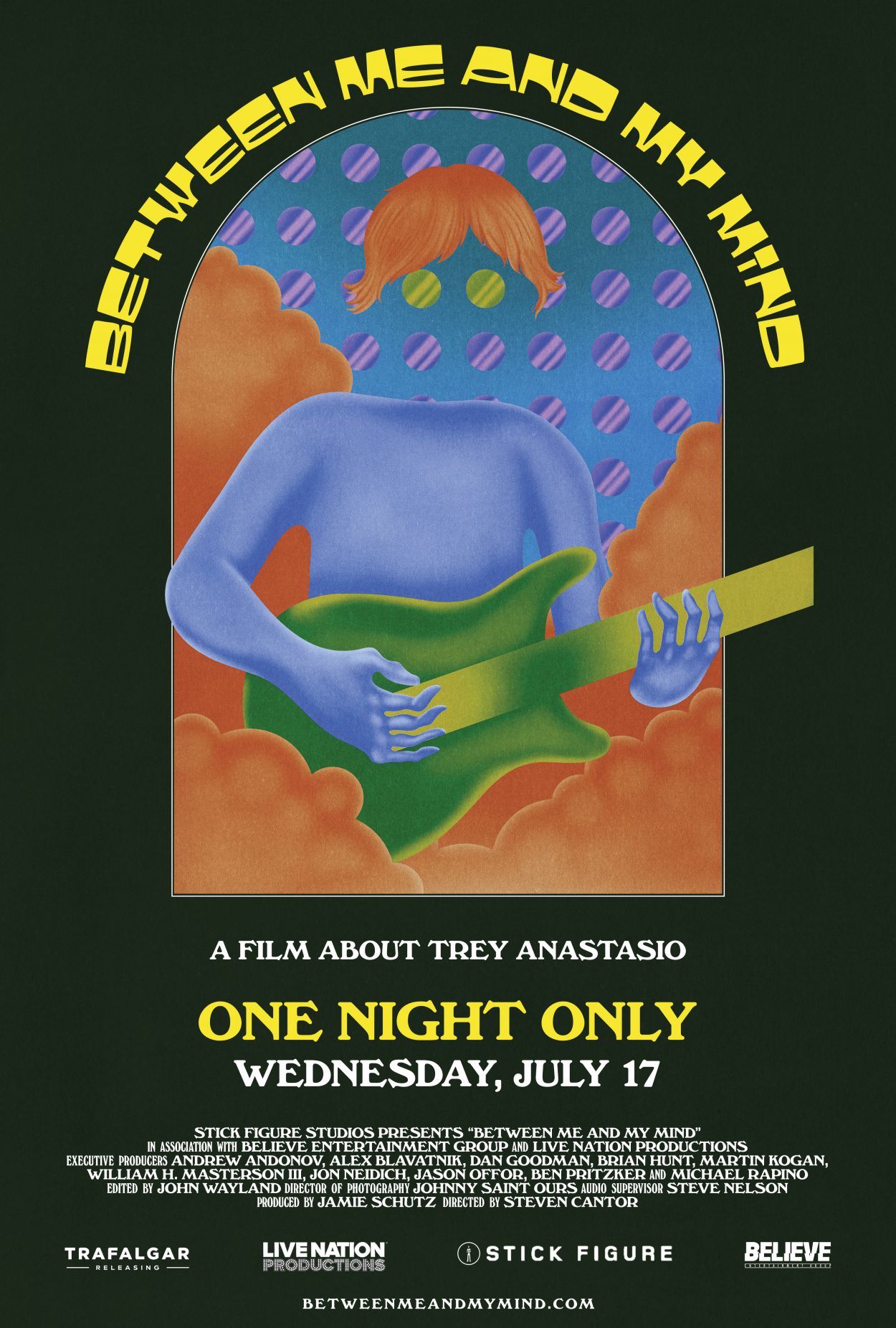 Following a critically-acclaimed, sold out world premiere at the 2019 Tribeca Film Festival, global event distributor Trafalgar Releasing today announced plans to bring Between Me and My Mind, a feature-length documentary chronicling the life and music of Trey Anastasio, to movie theaters across North America for a one-night engagement on July 17.

In partnership with Stick Figure Studios, Believe Entertainment and Live Nation Productions, Trafalgar Releasing will bring Steven Cantor’s documentary portrait of Anastasio to more than 300 theaters nationwide, giving audiences an intimate look into the mind of the gifted solo artist and founding frontman of one of America’s longest lasting and most successful touring bands, Phish.

“We’re so thrilled to have the chance to share Trey Anastasio’s constantly inspiring warmth and creativity through our film Between Me and My Mind,” says producer Jamie Schutz.  “The response at the Tribeca Film Festival was exhilarating and now, along with Trafalgar Releasing, we’re able to bring that excitement to an even larger audience, on the big screen all across North America this July”.

The 94-minute documentary film captures Anastasio as he works through some of his most personal song ideas to date, placing his relationships with friends and family at its core. At the same time, Between Me and My Mind also captures the musician preparing for one of Phish’s legendary New Year’s Eve shows at Madison Square Garden, culminating with an exhilarating and elaborately produced moment when the clock strikes midnight on-stage.

“The passion and support that Phish fans exuded for frontman Trey Anastasio at the Tribeca Film Festival exemplifies the deep connection he has cultivated with fans over the years”, said Trafalgar Releasing SVP of Content Acquisitions, Kymberli Frueh. “We are thrilled to bring Trey’s story to cinemas for a special one-night event, giving fans across North America the opportunity to gather as a community and experience it together.”

The event will be screened in theaters across North America on Wednesday, July 17. More information can be found at www.BetweenMeandMyMind.com, where fans can sign up for event alerts, including notification for when tickets go on-sale.

Trafalgar Releasing works with some of the world’s most renowned houses & companies; distributing high-profile arts content to cinemas worldwide from the Royal Shakespeare Company and the Royal Opera House. Additionally distributing in the UK, content from the Bolshoi Ballet, Glyndebourne and The Metropolitan Opera.

Over the past three decades, composer/guitarist/vocalist Trey Anastasio has forged a multi-faceted career, winning acclaim in rock, classical and theatrical circles. He is a founding member of Phish, one of today’s most successful and innovative rock bands. In the summer of 2017, Phish completed a residency at the world-renowned Madison Square Garden in New York – an unprecedented 13-night run known as The Baker’s Dozen. Phish’s total number of performances at the famed arena currently sits at 60.

Anastasio has received GRAMMY® nominations for his recordings with Phish and for his solo work. He has collaborated with such artists as Dave Matthews, Herbie Hancock, Carlos Santana, Toots and the Maytals, B.B. King and The Roots, and – as part of the trio Oysterhead – Les Claypool (Primus) and Stewart Copeland (The Police). He co-wrote the music for the Broadway musical Hands on a Hardbody, which received a Tony nomination for “Best Original Score” in 2013. In the summer of 2015, Anastasio joined the surviving four members of the Grateful Dead for five stadium shows, which celebrated the band’s 50th anniversary and served as their farewell shows.

Anastasio has performed his original compositions with numerous symphonies. The New York Times hailed his Carnegie Hall performance with the New York Philharmonic as “that rarest of rarities, a classical-rock hybrid that might please partisans from both constituencies.” In 2014, he debuted a new piece for guitar and orchestra, entitled Petrichor, on a West Coast orchestral tour that concluded with a performance at the Hollywood Bowl, marking his second performance with the Los Angeles Philharmonic. This past April, Anastasio released his 14th solo album, Ghosts of the Forest, which Rolling Stone said was “built around psychedelic guitar liftoffs, ambitious arrangements and extremely personal lyrics.”