The King And I: From The London Palladium Breaks Records to Become Biggest Theatre Event in Cinemas of 2018 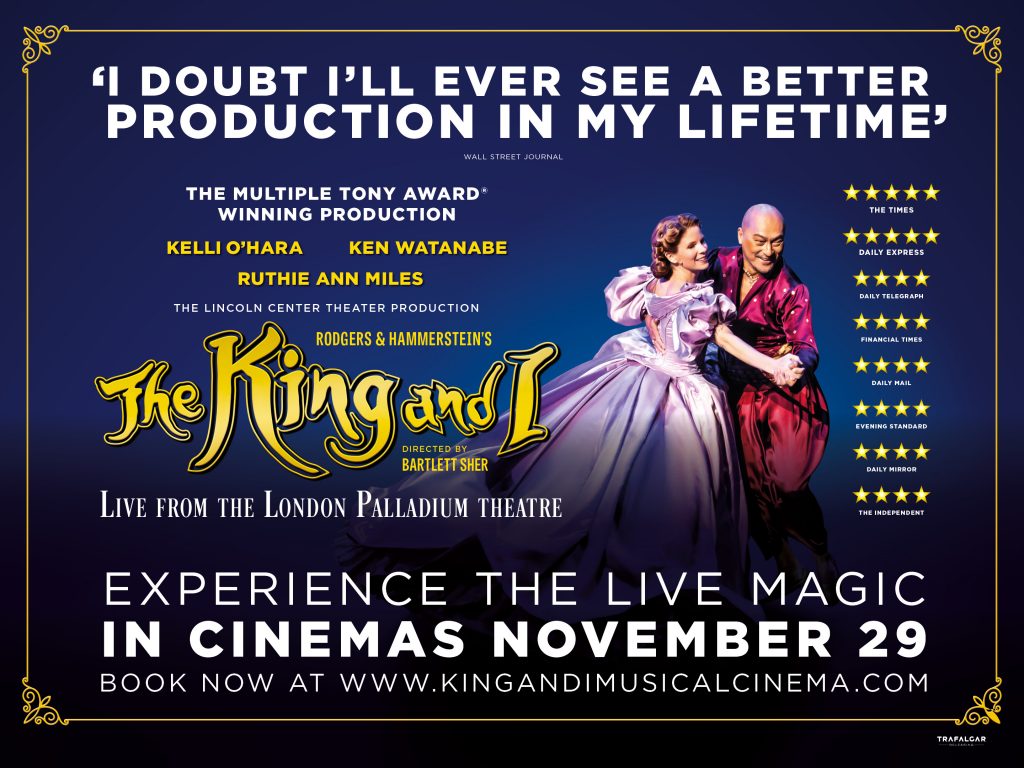 Further screenings added in December, due to phenomenal demand

The film version of the multiple Tony award-winning Lincoln Center Theater production of Rodgers and Hammerstein’s THE KING AND I: FROM THE LONDON PALLADIUMhas become the biggest theatre event in cinemas of 2018 following yesterday’s (29 November) screenings around the world. The production is expected to take $2.5m at the box office. In the UK the film reached the number one spot, with more than double the box office of the next film, Fantastic Beasts: The Crimes of Grindelwald.

More than 135,000 movie goers packed into cinemas across the globe to watch THE KING AND I: FROM THE LONDON PALLADIUM– filmed on stage at the iconic London Palladium.  Such has been the demand for tickets, Trafalgar Releasing has scheduled encore screenings both in the UK and globally throughout December.

Producer Howard Panter says: “The response from cinema audiences around the world has been phenomenal. And I’m delighted that THE KING AND I: FROM THE PALLADIUM is now the biggest theatre event in cinemas of the year, taking the number one position at the Box Office.  The demand for tickets has been so huge that we have scheduled many more encore screenings of the film all over the world – giving an even greater number of people the opportunity to enjoy this lavish award-winning production.”

Trafalgar Releasing’s Marc Allenby says:“We are thrilled to have produced and distributed this incredible production, having watched it come to life on the big screen and seen the amazing reaction from audiences around the world. It’s been fantastic to add The King and I to our roster of musical theatre this year alongside An American in Paris and Funny Girl.”

Set in 1860s Bangkok, the musical tells the story of the unconventional and tempestuous relationship that develops between the King of Siam and Anna, a British schoolteacher whom the modernist King, in an imperialistic world, brings to Siam to teach his many wives and children.  With one of the finest scores ever written including; Whistle a Happy Tune, Getting to Know You and Shall We Dance,and featuring a company of over 50 world-class performers, THE KING AND I: FROM THE PALLADIUM is a testament to the lavish heritage of gloriously romantic musical theatre – it is the greatest musical from the golden age of musicals.