The Continuing Impact of COVID-19 on UK Cinemas 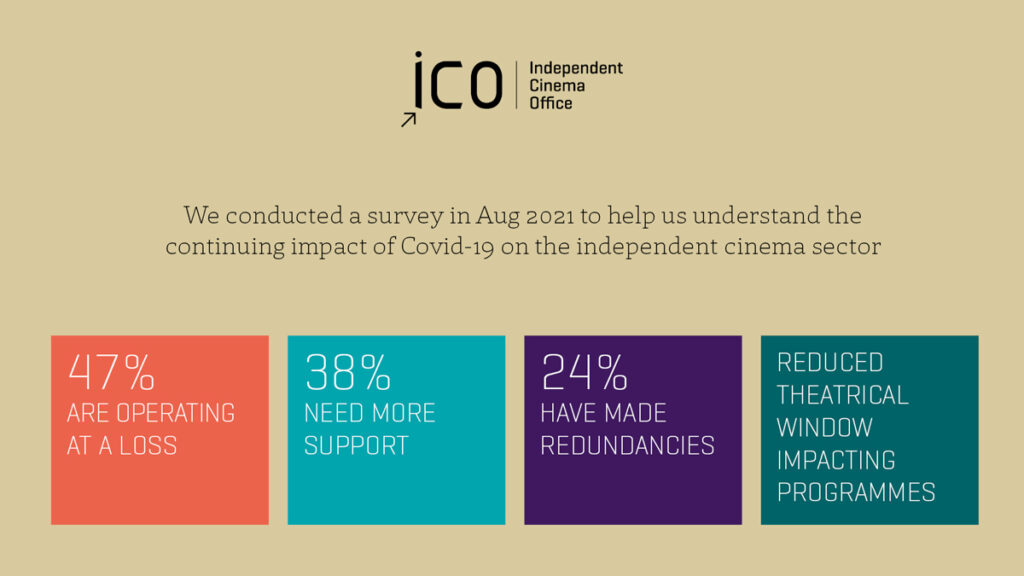 The Independent Cinema Office (ICO) today reports the results of a new survey which reveals the continuing impact of COVID-19 across the independent cinema sector.

Although the majority of cinemas have now reopened and the restrictions on social distancing measures have been removed, the ICO found that cinemas face continuing uncertainty.

Audience confidence and increasing audiences are both venues’ deepest concern (81%) and greatest priority over the next 1-3 years (87%). 80% of venues are especially keen to increase audiences under the age of 30.

Of other concerns, 56% of respondents expressed concern around film releases, and having content to play; 48% named safety wellbeing of staff and audiences. Revenue lost due to social distancing, the ability to remain solvent, and staffing levels, remain key concerns for cinemas.

“This report illustrates the current challenges facing cinemas and gives some indication of the challenges ahead – like many industries, cinemas are still juggling the competing demands of social distancing, consumer confidence, economic uncertainty, and the responsibility of caring for staff and audiences’ safety and welfare. However, what the past 18 months have shown us is how important independent cinemas are to their local audiences, and how valued they are by communities beyond a space to watch films. For the next year, ongoing support and close collaboration between distributors and cinemas are likely to remain important while cinemas continue the process of welcoming their audiences back and returning to financial sustainability.”

31% of venues, are unsure how long they can operate with this loss. 43% are operating with 50% or less seating capacity.

In-venue content
21% of respondents are playing more independent titles. 45% cited the reduced theatrical window impacting their programme. One respondent said, “we have taken mainstream titles off-date due to VOD – we would have taken these titles on release pre-pandemic”. 34% are struggling to acquire film content and 47% are offering less event cinema than before the pandemic.

Digital offering
During the pandemic, 56% of venues reported that they did not provide online content. A minority of 16% provided online through their own platform, while 25% through film distributor platforms.

Now that venues are open, 26% are continuing to offer online content, and 42% have said they won’t.

The report can be downloaded from the ICO website: https://www.independentcinemaoffice.org.uk/advice-support/the-continuing-impact-of-covid-19/

About the Independent Cinema Office
The Independent Cinema Office (ICO), is the UK’s national body that supports independent cinemas through programming, training, consultancy, cultural distribution and organising Screening Days events that help cinemas broaden their programmes. Their mission is to build an open, thriving, robust cinema sector and for everyone to have access to cinema that nourishes the soul and changes lives. www.independentcinemaoffice.org.uk