ScreenX to Debut in Middle East through New Partnership with KNCC 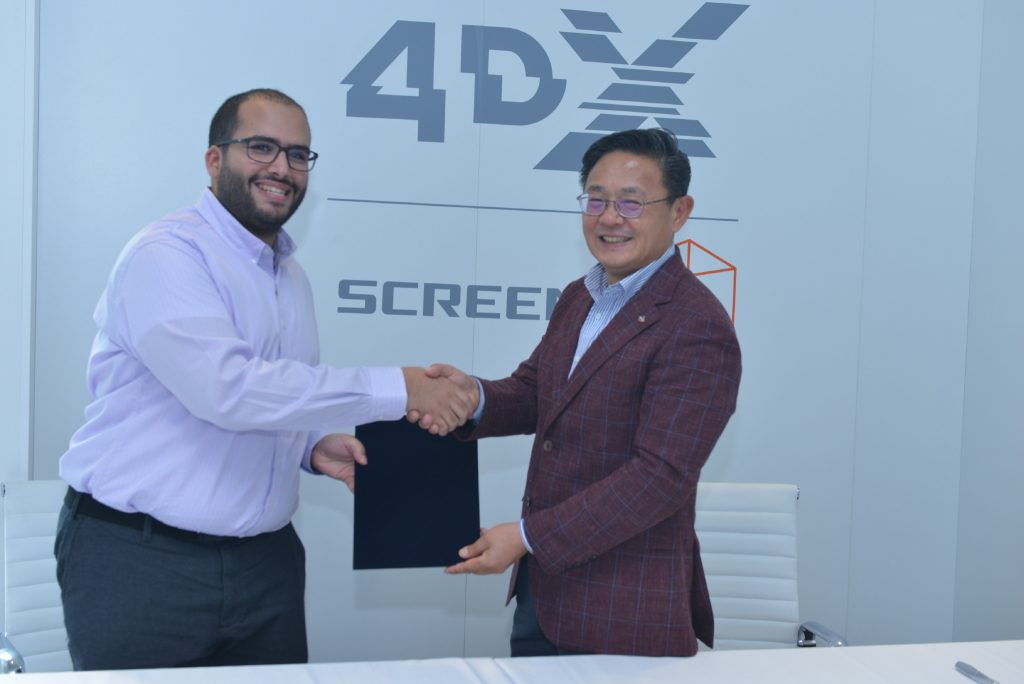 At CineEurope this week, CJ 4DPLEX announced a new partnership with KNCC (Kuwait National Cinema Company) to bring ScreenX – the world’s first multi-projection system that provides a 270-degree panoramic film viewing experience within a theatre setting – to the Middle East. This partnership will bring the very first ScreenX screen to Kuwait. CineEurope takes place from June 11-14 in Barcelona, Spain.

Kuwait National Cinema Company was established in 1954 as the first cinema operator in the GCC. KNCC operates under the Cinescape brand, which is renowned for its high quality ambience that treats guests to an unforgettable experience. KNCC is a pioneer in state-of-the-art cinematic experiences and technologies by leading on innovation as one of its strategic pillars. The partnership with CJ4DPLEX to introduce ScreenX in Kuwait pushes KNCC’s vision forward by offering guests a revolutionary cinematic experience that they won’t soon forget. This partnership follows KNCC bringing CJ 4DPLEX’ 4DX technology to the Middle East in 2016.

“We are proud to once again join forces with CJ 4DPLEX, whose efforts have been key in the success of 4DX in Kuwait. This new and exciting ScreenX partnership not only solidifies an already strong relationship, but paves the way to many more collaborations in future market-leading innovation. We are beyond excited to see what the future holds,” said Khaled Al Marzooq, Business Development Manager of KNCC.

“Through this new partnership, the ScreenX footprint continues to expand into new markets, following earlier rollouts from Asia and Europe to the Americas,” said Byung-Hwan Choi, CEO of CJ 4DPLEX. “This expansion of ScreenX into the Middle East builds on the region’s positive momentum, and positions it strongly as the cinema industry moves into the future.”

ScreenX is the world’s first multi-projection system designed to enhance the cinematic immersiveness of the theatre setting. It was created in 2012 by CJ CGV, part of South Korean conglomerate CJ Group, as one of the company’s industry-changing “next cinema formats”, alongside 4DX, the global-leader in multisensory cinema technology with motion and environmental effects. ScreenX allows moviegoers to experience beyond the frame of the movie screen by utilizing a proprietary system that expands images of feature films and pre-show advertising to create an immersive, panoramic, 270-degree format that projects onto three walls of theaters.  To date, ScreenX has been installed in over 142 screens around the world, including 86 screens in South Korea; 44 screens in China; 3 in the United States; 4 in Turkey; 2 in Vietnam and 1 in Thailand, Japan, and Indonesia.

CJ 4DPLEX is the world’s first 4D cinema company, headquartered in Seoul with international offices in Los Angeles and Beijing. The company created 4DX, the first and leading 4D cinema technology for feature films, providing moviegoers with an immersive cinematic experience that utilizes all five senses, allowing the audience to connect with movies through motion, vibration, water, wind, snow, lightning, scents, and other special effects that enhance the visuals on-screen. CJ 4DPLEX brings 4DX auditoriums to exhibition partners along with 4DX codes for both major Hollywood blockbusters and local titles. Each auditorium incorporates motion-based seating synchronized with more than 20 different effects and optimized by a team of skilled editors, maximizing the feeling of immersion within the movie, beyond the limits of audio and video. Since 2009, more than 520 Hollywood and local titles have been screened in 4DX. As of May 2018, more than 62,800 4DX seats operate in 524 auditoriums spanning 59 countries.

Kuwait National Cinema Company, a market leader in entertainment & leisure, with locations across the State of Kuwait operating over 61 screens in 12 locations accommodating over 12,000 seats in addition to more locations in its pipeline under its Cinescape brand. Cinescape offers its guests a world class and memorable cinematic experience.