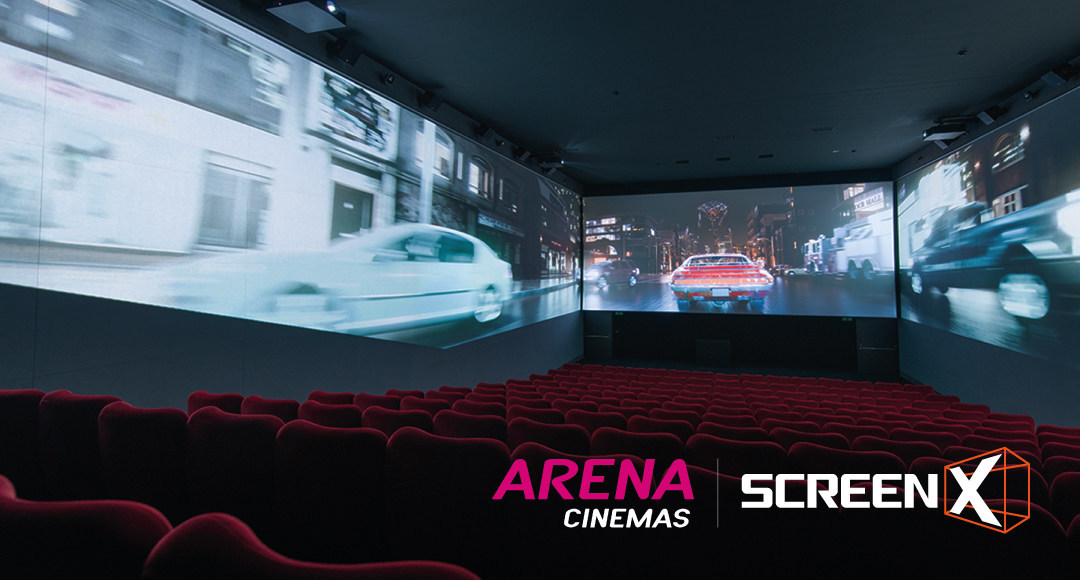 Seoul, South Korea & Los Angeles, California (July 25, 2018) – CJ 4DPLEX is continuing its robust global market expansion mandate for ScreenX by entering into new partnerships with the leading multiplex operators all over the world and opening new ScreenX sites through the strong partnerships with existing partners. In fact, just last month the company entered into a new partnership with Multinational cinema operator Cineworld Group to install ScreenX technology at 100 theaters in the U.S., U.K., and eight other international locations.

The ScreenX platform is the world’s first multi-projection theatre technology designed to enhance the movie going experience. ScreenX allows moviegoers to go beyond the frame of the traditional movie screen, utilizing a proprietary system to expand images of feature films and pre-show advertising to the left and right walls of the theatre, creating an immersive, panoramic, 270-degree experience.

As part of this overall expansion, CJ 4DPLEX is scheduled to open the three ScreenX sites in Switzerland during July with the action-adventure movie Ant-Man and The Wasp. The company is also experiencing strong 4DX format showings on the continent for tent pole blockbuster films.

The initial Swiss openings include:

“We are thrilled to be working with such great partners as Les Cinémas Gaumont Pathé and ARENA Cinemas to bring ScreenX to theatres in Europe for the first time. We’ve already witnessed a high degree of success in Europe with 4DX, and through these relationships will introduce ScreenX, bringing a new level of immersion and storytelling to European movie-goers,” said Byung-Hwan Choi, CEO of CJ 4DPLEX.

“It is impressive what great innovations CJ 4DPLEX has brought to the cinema experience. We proudly welcome ScreenX, this trend-setting movie experience. We anticipate this state-of-the-art cinema technology will be a driver for more attendance as we have already made a great success with 4DX,” said Edouard A. Stöckli, Owner of ARENA Cinemas.

About ScreenX
ScreenX is the world’s first multi-projection system designed to enhance the cinematic immersiveness of the theatre setting. It was created in 2012 by CJ CGV, part of South Korean conglomerate CJ Group, as one of the company’s industry-changing “next cinema formats”, alongside 4DX, the global-leader in multisensory cinema technology with motion and environmental effects. ScreenX allows moviegoers to experience beyond the frame of the movie screen by utilizing a proprietary system that expands images of feature films and pre-show advertising to create an immersive, panoramic, 270-degree format that projects onto three walls of theaters. As of July, ScreenX has been installed in 147 screens around the world, including 85 screens in South Korea; 44 screens in China; 4 in the United States; 4 in Turkey; 3 in Switzerland; 2 in France; 2 in Vietnam and 1 in Thailand, Japan, and Indonesia.

About ARENA Cinemas AG
With the opening of the multiplex cinema at the Sihlcity mall eleven years ago, ARENA Cinemas has laid the foundation for its current group of cinemas. The third largest group in Switzerland, ARENA Cinemas is the only one to be present at five sites, with a total of 52 screens in the three linguistic regions. With ARENA Cinemas Sihlcity in Zurich, it operates a megaplex – currently the only one in Switzerland – with 18 screens, including 2 4DX, 1 Onyx Cinema LED 3D and 1 ScreenX auditoriums. At the end of 2018, a new five-screen cinema at Netstal GL and beginning 2020, another 18 screens megaplex in Basel will be added to the group. Always at the forefront of innovation, ARENA Cinemas opened from 2015 the first of Switzerland 4DX cinemas in Geneva, Zurich, Fribourg and Lugano. www.arena.ch