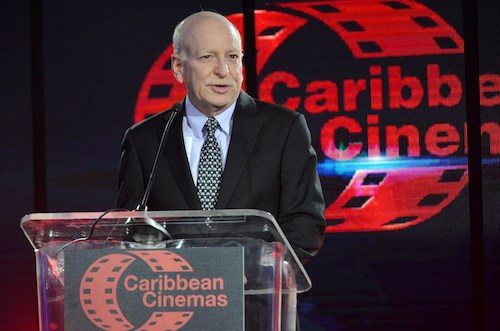 Robert Carrady, President of Caribbean Cinemas, will receive the “Career Achievement in Exhibition Award,” it was announced today by Mitch Neuhauser, Managing Director of CinemaCon. CinemaCon, the official convention of The National Associations of Theatre Owners (NATO), will be held April 23-26, 2018 at Caesars Palace in Las Vegas. Carrady will be presented with this honor during the convention’s International Day festivities, taking place on Monday, April 23, 2018.

“From his dedication to bringing the latest innovations in the theatre going experience to his audiences and his unparalleled passion for the theatre experience Robert Carrady is a perfect honoree for the CinemaCon Career Achievement in Exhibition Award,” noted Neuhauser. “A successful family business with a dedicated base of employees, Carrady has brought Caribbean Cinemas to a level of success like no other and we are thrilled to be able to honor him at this years CinemaCon.”

The largest theater circuit in the Caribbean with 492 screens and 59 locations in 13 territories Caribbean Cinemas is a family business founded in 1969 by Carrady’s father in San Juan, Puerto Rico. Carrady developed his passion for the movie industry as a young child visiting the corporate office and working in various positions at the theatres during his summer vacations before officially joining the company in 1977 upon his graduation from Tufts University. At the time Caribbean Cinemas had only six screens in Puerto Rico and had just opened a six screen theater in the Dominican Republic. He immersed himself in the business before becoming an integral part of the company’s rapid and solid growth. Operations expanded all over Puerto Rico, the Dominican Republic, the English speaking Caribbean Islands and recently to other territories such as Guyana, Panama and Guadeloupe.

CinemaCon will attract upwards of 6,000 motion picture professionals from all facets of the industry –from exhibition and distribution, to the equipment and concession areas – all on hand to celebrate the movie-going experience and the cinema industry. From exclusive Hollywood product presentations highlighting a slate of upcoming films, to must-see premiere feature screenings, to the biggest stars, producers and directors, CinemaCon will help jumpstart the excitement and buzz that surrounds the summer season at the box office.

The National Association of Theatre Owners (NATO) is the largest exhibition trade organization in the world, representing more than 33,393 movie screens in all 50 states, and additional cinemas in 94 countries worldwide. NATO’s membership includes the largest cinema chains in the world and hundreds of independent theatre owners, too.