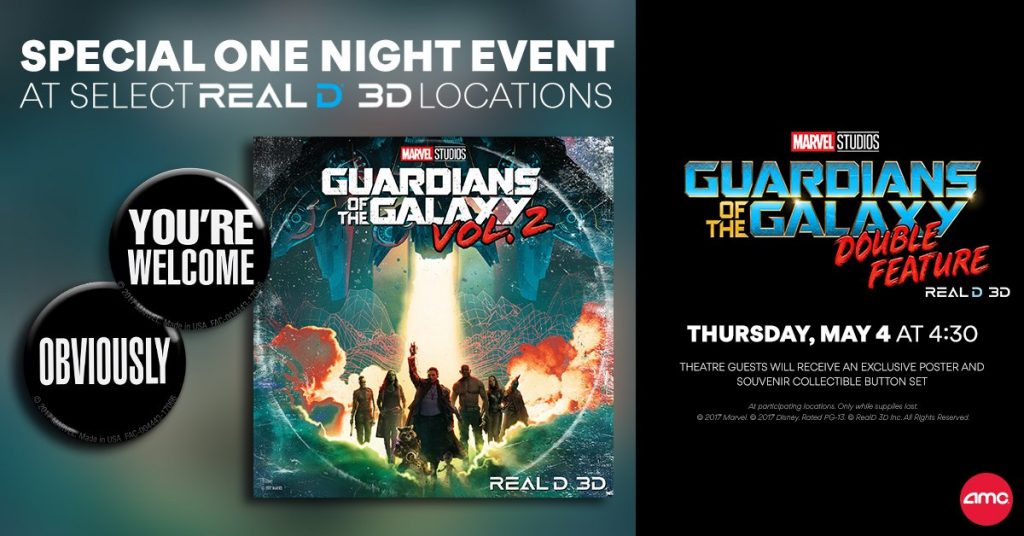 RealD, the world’s biggest 3D company has joined forces with some of the nation’s largest theater chains to offer a once-in-a-lifetime 3D double feature of Marvel Studios’ original “Guardians of the Galaxy” as well as the brand-new “Guardians of the Galaxy Vol. 2,” exclusively at RealD 3D-equipped theaters. The special double feature screenings will be offered on Thursday afternoon May 4 nationwide at more than 550 locations only in RealD, it was announced today by Travis Reid, President of Worldwide Cinema and Chief Operating Officer for RealD.

Guests who participate in the special fan event will receive an exclusive mini poster and a set of souvenir collectible buttons while supplies last. Participating exhibitors include some of the nation’s largest theater circuits, among them AMC Theatres, Cinemark, Cineplex, National Amusements, and Regal Cinemas. For a list of theaters playing the 3D double feature, visit http://reald.com/#/movies/gotgdoublefeature

“The visuals in the ‘Guardians of the Galaxy’ universe are stunning and the movies are even more spectacular in RealD 3D. We wanted to create a fan experience as epic as the movies and we can’t think of a better way to get fans excited for the new film than to offer an exclusive double feature event and a chance to experience both ‘Guardians of the Galaxy’ films back-to-back in 3D,” said Reid.

As the world’s leading 3D cinema system, no company has been more instrumental in perfecting, promoting or providing premium quality 3D experiences to audiences worldwide than RealD.

About Marvel Studios’ Guardians of the Galaxy Vol. 2
Set to the all-new sonic backdrop of Awesome Mixtape #2, Marvel Studios’ “Guardians of the Galaxy Vol. 2” continues the team’s adventures as they traverse the outer reaches of the cosmos. The Guardians must fight to keep their newfound family together as they unravel the mystery of Peter Quill’s true parentage. Old foes become new allies and fan-favorite characters from the classic comics will come to our heroes’ aid as the Marvel Cinematic Universe continues to expand.