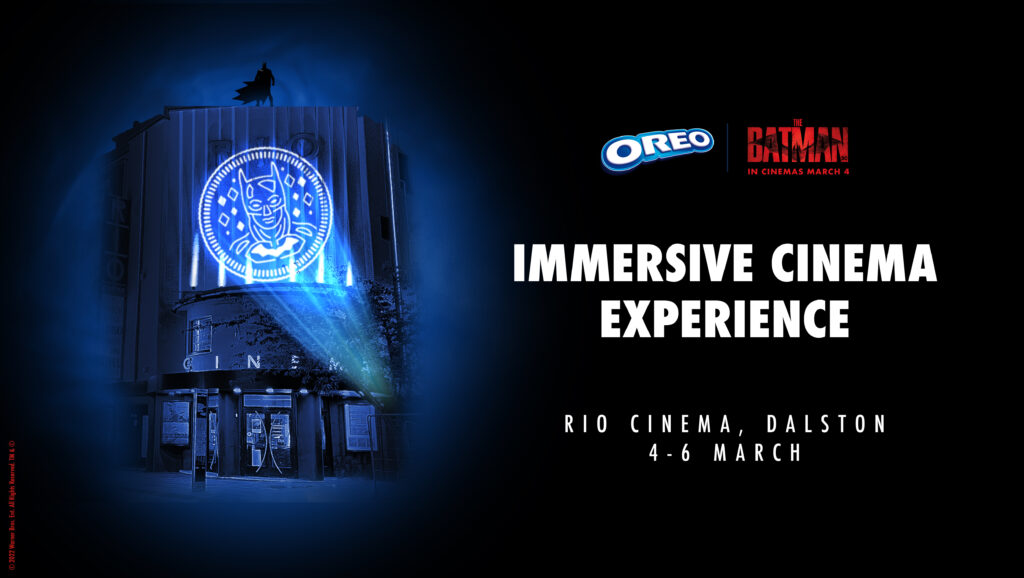 OREO and Digital Cinema Media (DCM) have partnered to deliver an action-packed immersive cinematic experience to celebrate the launch of upcoming movie, “The Batman”, which stars Robert Pattinson in the dual role of Gotham City’s vigilante detective and his alter ego, reclusive billionaire Bruce Wayne.

The deal was brokered by The Story Lab together with DCM, and creatively directed and delivered by elevenfiftyfive, as part of a wider brand collaboration between OREO and Warner Bros.

Across three days from Friday 4 March, a full takeover is being staged of the RIO Cinema in Dalston, which will be renamed to the OREO Cinema for the weekend. For the first time ever, the cinema’s iconic external signage will also be totally transformed.

Once inside the venue, guests will be ushered into a world of suspense and unexpected surprises as they are presented with a ‘who dunnit’ type crime scene, with every audience member suddenly a suspect. Guests will be encouraged to combine forces with playful actors, including OREO delegates and Gotham City’s Police Force, to unravel a series of clues and challenges and solve an exciting mystery.

The impressive full OREO takeover of the cinema will be full of photo opportunities. There will be an OREO ticket kiosk, a full set design including branded vinyls covering all walls and a selection of specially curated OREO-inspired snacks, including ‘OREO x The Batman’ embossed cookies.

Across the weekend, all screenings at the cinema will be solely dedicated to showing “The Batman”, with a grand finale immersive theatrical experience in-screen before the film.

Rafael Espesani, OREO Senior Brand Manager, said: “Bringing two such loved icons of OREO and Batman together has been a unique experience so far and we now can’t wait for fans to enjoy an exhilarating immersive event as they get their first look at one of the most anticipated films of 2022. From tantalising their tastebuds with our OREO-inspired creations to solving riddles and more, the screenings are sure to be a truly unforgettable one.”

Lawrence Tapper, Warner Bros. UK, Director of Commercial and Marketing Partnerships, said: “In an unprecedented year for Batman, this partnership exemplifies the creative excellence our characters inspire. OREO is a fantastic partner and this imaginative execution captures both their playful tone and the grit of our iconic superhero.”

Denia Souli-Vounisiou, Client Partner, The Story Lab, added: “Our task was to drive fame and talkability for this iconic collaboration between OREO and “The Batman” beyond a standard media partnership and what better way to do this than by taking cinematic experiences to the next level by partnering with DCM and elevenfiftyfive to deliver a fully immersive theatrical experience.”

David Kapur, Director, elevenfiftyfive, added: “Enjoying Oreo cookies is a natural part of many film experiences but we wanted to blow this up into something special. In collaboration with DCM, we also needed a playful way to bring in the world of The Batman. Our solution was to drive PR by renaming an iconic cinema and then create engagement with a multi-layered "who done it" including the use of set design, actors & of course exclusive Oreo creations.”

“The Batman” is released in cinemas nationwide by Warner Bros. on 4 March, buy tickets: https://riocinema.org.uk/RioCinema.dll/WhatsOn?Film=14375080

About Mondel?z International
Mondel?z International, Inc. (Nasdaq: MDLZ) empowers people to snack right in over 150 countries around the world. With 2021 net revenues of approximately $29 billion, MDLZ is leading the future of snacking with iconic global and local brands such as OREO, belVita and LU biscuits; Cadbury Dairy Milk, Milka and Toblerone chocolate; Sour Patch Kids candy and Trident gum. Mondel?z International is a proud member of the Standard and Poor’s 500, Nasdaq 100 and Dow Jones Sustainability Index. Visit www.mondelezinternational.com

About elevenfiftyfive
Established in 2008, elevenfiftyfive are a fully independent creative marketing and brand partnerships agency with hubs in London & Manchester. Driven by their passion for movies, creativity, and the desire to produce ground-breaking work.  You don’t need to be “a film brand” to work with them, but their activity will always have a touch of the "movies!” Their services include Creative, Strategy, Partnerships, Experiential (irl & online), Content Creation, Insights, Influencer Engagement & Tech. elevenfiftyfive are also the creators of MASSIVE & ourscreen.