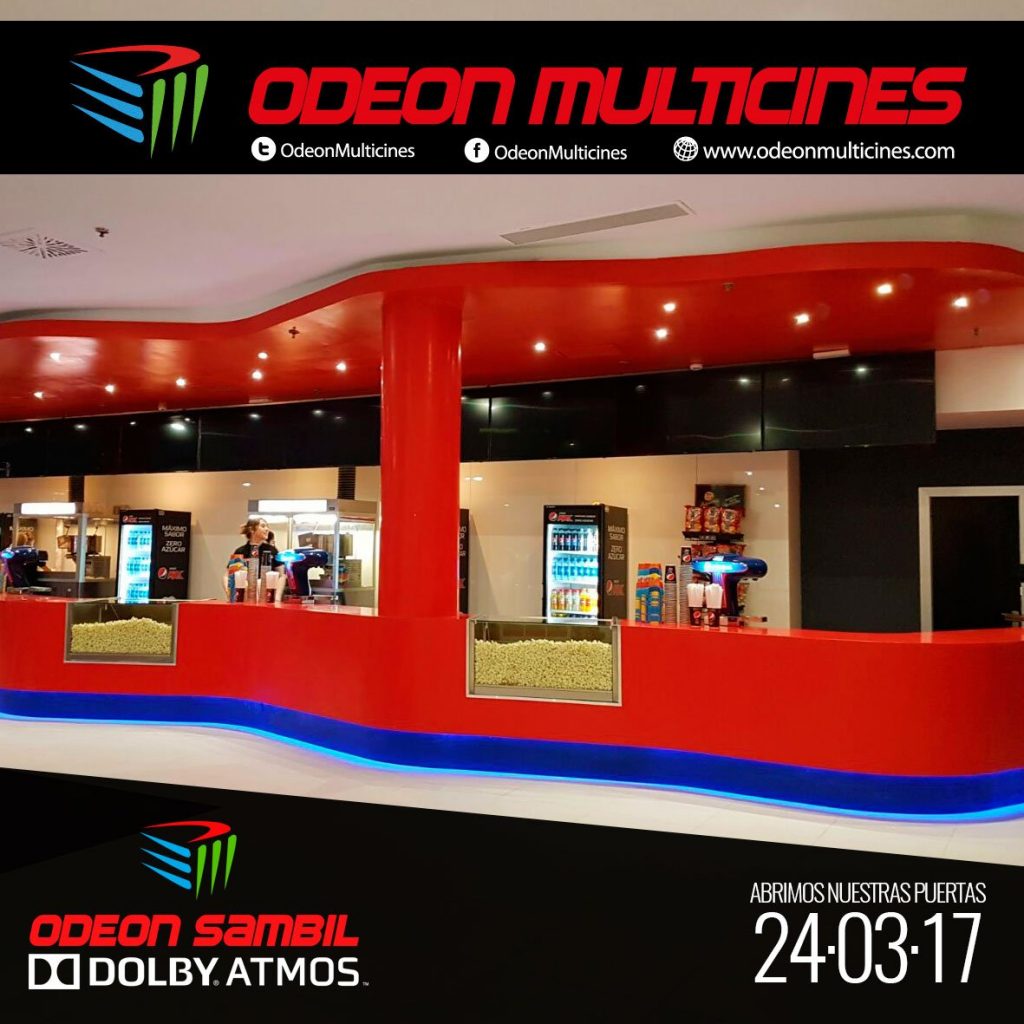 If there is one thing for which the recently opened Odeon Sambil Dolby Atmos multiplex in Madrid stands out, it is the number of technological firsts clocked up by its twelve theatres. It is the first multiplex in Spain with all its screens equipped with 4K projectors – all from Christie – and also the first to include Dolby Atmos and Christie Vive Audio™ sound in all its theatres, and the only multiplex in Spain with more than one laser screen. In this case, Sambil has two screens equipped with laser projection, both with Christie Solaria CP42LH RGB projectors.

The list of firsts doesn’t stop there. The two Christie RGB 3DLP laser projectors introduce EWD (Enhanced Wavelength Diversity) technology to Spain for the first time. EWD uses a unique mixture and configuration of Christie laser modules which reduces the impact of speckle and offers spectacular viewing on silver screens.

“Christie is the only projector manufacturer offering EWD projection, affording a much richer, colorful, brighter and higher contrast image quality. And that means we can give our audiences a truly unforgettable movie-going experience,” explained Luis Millán, owner of Odeon Multicines.

Luis Millán started out in the cinema exhibition business back in 1984. Later on, he set up Equipo de Cine, an integrating company that installed its first multiplex in 2003. The experience he has accrued over the years through a large number of installations has made him one of the major players in the digitalization of cinemas in Spain. In 2012 he founded Odeon Multicines, which is now one of the country’s most important chains, totaling 98 screens in the whole of Spain.

So it comes as no surprise that Millán dreamt up the idea of Odeon Sambil Dolby Atmos, recently opened on March 24, now Europe’s most advanced multiplex. Located in the Sambil shopping mall, next to Madrid’s main beltway, it can seat 2000 people over a floor area of 6000 square metres.

The two largest theatres at Odeon Sambil, with 18-metre screens, are equipped with Christie RGB laser projectors. Each one of these projectors uses eight laser modules to generate 40,000 lumens – since each module can generate up to 5,000 lumens of white light. In addition, the scalability of the platform makes it possible to easily add, remove, activate or disable up to a dozen modules depending on brightness requirements, meaning that it is possible to produce up to 60,000 lumens if needed.

The other 10 screens in the multiplex, ranging from 10 to 18 metres, have a combination of Christie CP4220 (22,000 lumens) and Christie CP4230 (34,000 lumens) 4K 3DLP Cinema projectors, all coming with Christie IMB, a DCI-compliant totally integrated media block to easily and efficiently run the cinema content.

Another outstanding feature of the new multiplex is that the 12 theatres are equipped with Harkness Clarus XC 170 silver screens. These screens are 3D ready, which ensures that all twelve screens at Odeon Sambil can project 3D movies, another first in Spain. The multiplex uses Get-3D’s passive 3D system.

Likewise, all the 12 auditoria have premium leather upholstered seats designed specifically for the multiplex by the Spanish company Josper. “These truly high-end seats are designed to afford spectators unparalleled comfort, and not just in one but in all 12 screens, something no other multiplex in Spain can match,” Luis Millán emphasized.

The lobby is another of the multiplex’s distinctive features. Measuring almost 30 square metres, its gigantic video wall made of eighteen 75-inch LCD screens is proving to be another talking point for visitors to the complex.

The engineering and integration of the new multiplex was commissioned to the Christie partner Ingevideo, who did an impressive job working hand in hand with Equipo de Cine, the company who looked after installing the equipment.

These companies introduced a whole series of technological developments into Odeon Sambil that are still unheard of in most multiplexes. For instance, they installed a Crestron automated control system to run the lights and doors of all twelve theatres. They also integrated dimmer LED lighting in the Vive Audio speakers to underscore the design, lending the theatres a unique cutting-edge touch by changing the color and intensity of the speaker lights while screening the advertisements.

“Honestly, we are proud to have designed Spain’s most outstanding cinema complex to date,” said Miguel Ángel Piqueras, director general of Ingevideo. “It was a genuine challenge given the complexity of integrating so many groundbreaking new systems in record time, but the end result is a world-standard multiplex where spectators can watch movies with unbeatable image and sound quality,” he added.

Marcos Fernández, Christie director for Spain and Portugal, who was at the helm of the project for Christie alongside Chris Connett and Adil Zerouali, Cinema Director for Christie Europe, explained: “We ought to underline just how exceptionally good this multiplex is, completely unique at the current moment, when it is not a common practice among many suppliers to seek excellence and offer spectators maximum quality. In this case, I believe we have achieved our goal, not only for the projectors and the speakers, but for the multiplex as a whole. The experience the audience is going to have is only available to a few, and having a cinema complex like this in Spain is something we are proud of.”

Adil Zerouali concluded: “We are convinced that, thanks to the EWD RGB laser, Vive Audio and Dolby Atmos in this new complex, people will rediscover the experience of “going to the movies”; immersed in the vivid images and clarity of sound, they will be completely caught up in the story.”

About Christie
Christie Digital Systems Canada, Inc. is a global visual and audio technologies company and is a wholly-owned subsidiary of Ushio, Inc., Japan, (JP:6925). Consistently setting the standards by being the first to market some of the world’s most advanced projectors and complete system displays, Christie is recognized as one of the most innovative visual technology companies in the world. From retail displays to Hollywood, mission critical command centres to classrooms and training simulators, Christie display solutions and projectors capture the attention of audiences around the world with dynamic and stunning images. Visit www.christiedigital.com/EMEA for more information.