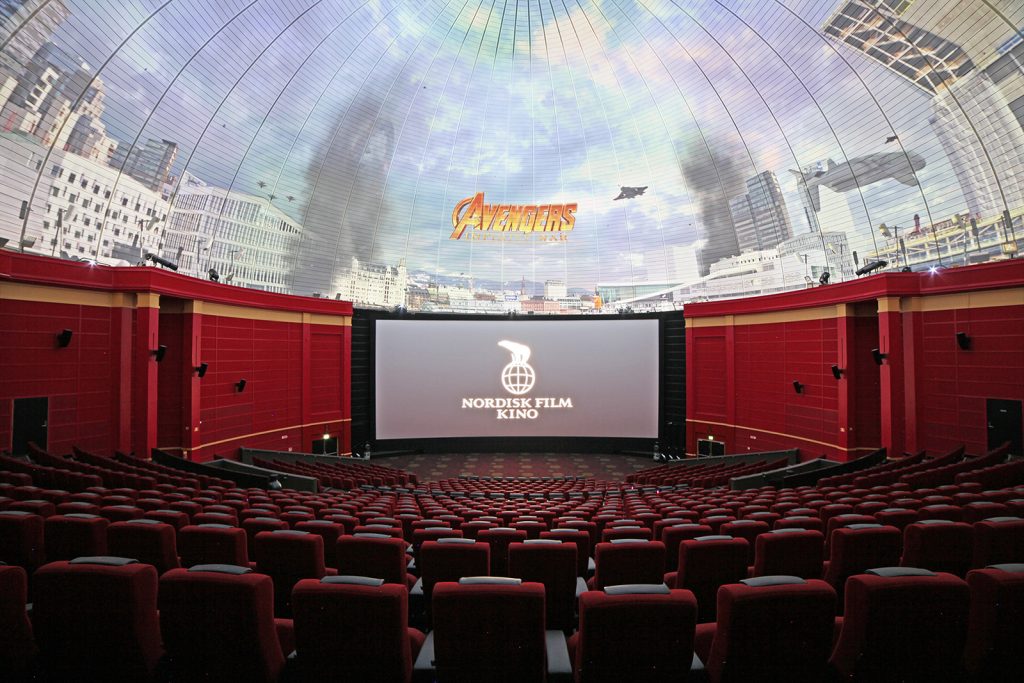 With its iconic 32m high dome and circular auditorium, the Colosseum in the Norwegian capital Oslo was the biggest and most modern cinema in Scandinavia when it opened in 1928. Over the intervening 90 years it has remained extremely popular, with audiences enjoying the biggest screen in northern Europe. It has maintained a long history of staying up-to-date with the latest cinema technology, which is why it has relied on Alcons pro-ribbon audio systems for the past 10 years.

The Colosseum was updated several times to embrace the latest film technology between the late 1940s and early 1960s. When it burned down in 1963, it was so popular that it was completely rebuilt and reopened within two years. Reducing the capacity from 2100 to 1158 increased the quality of the audience experience and, ever since, it has continued to embrace the most modern cinema technology. So it is fitting that, since 2009, Alcons Audio pro-ribbon systems have been a vital part of the audio experience.

Alcons developed its Cinemarray scalable line source screen system for the Colosseum in 2009. The system was so successful that Alcons expanded the range and it is now an integral part of many cinemas across Europe and the United States.

“The dome is completely open above the audience and, with the long 40+ meter/130+ ft distance from the last row of audience to the screen, in the past there were a lot of acoustic issues with conventional cinema audio systems,” says Alcons co-founder Tom Back. “Using our pro-ribbon line-array technology, we achieved very precise projection without any side-lobes, which meant there were no unwanted reflections and the audience’s audio experience radically improved.”

Alcons systems are renowned for their exceptional audio quality and directivity. But another advantage of the pro-ribbon technology is that they have a very long life – and therefore minimal depreciation cost.

When the Colosseum was refurbished it was brought up to standard for Barco AuroMax audio processing. The Alcons system was retained, only needing a minor upgrade of additional front channels – two CRA30N and two CRA30W bi-amp line-array cinema front systems, plus four more ALC4 2x 2kW amplified loudspeaker controllers.

“The system had been in constant use for eight completely problem- and maintenance-free years,” says Tom. “All it needed was enhancing to adopt the new audio technology and to make it state-of-the-art” again.

“Because of its architecture, the Colosseum is acoustically a difficult room, but the projection control of Alcons pro-ribbon technology is the key to making it a space with an exceptionally high level of audio performance. The Cinemarray system is suitable for any size venue, with any type of acoustics, and we are very pleased that it not only continues to enthral audiences at the iconic Colosseum, but at a wide array of cinemas and hybrid-cinema / performing-arts theatres throughout the world.”