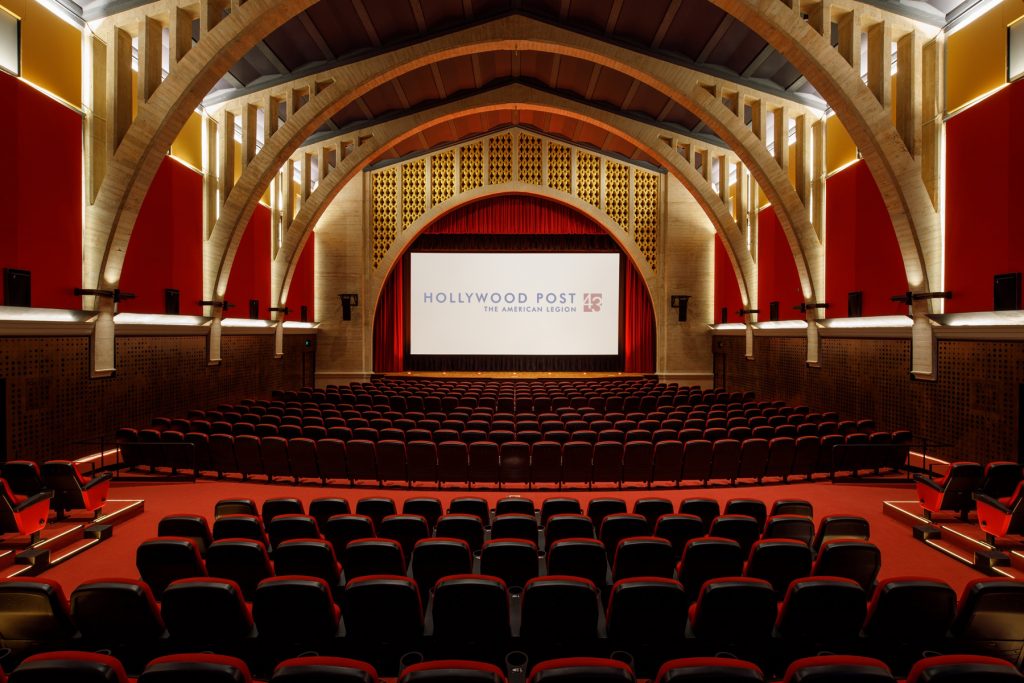 Founded in 1919 by First World War veterans working in the motion picture industry, the American Legion’s Post 43 became a Hollywood icon, with members including Clark Gable, Charlton Heston, Mickey Rooney, Ronald Reagan and more. A major project to update the post’s auditorium has put it back at the center of the Los Angeles community, with Alcons Audio playing the starring role.

Movies have always played a key role in the life of Post 43. As veteran Bill Steele – Post 43 member and the upgrade’s project manager – says, it has always been “that much more showbiz” than any other American Legion post. Several years ago, Post Commander Fernando Rivero saw the opportunity to re-establish Post 43’s role as an important part of the local community by transforming it into a state-of-the-art, 500-seat movie theater and live venue.

“It had great potential to be a rental facility, a cultural venue and to let the public see this amazing space we have,” says Bill. “The plan was to modernize it as a technically-advanced cinema, but to retain the ability to host dances, meetings and live music, with everything done in the context of its history and honoring its architecture.” Ambitiously, on the cinema side the desire was also to make it suitable for digital, 70mm, 35mm and even 16mm film showings.

“Hollywood is a very demanding audience, because they’ve heard it all,” says Bill. “We really wanted the best possible sound, a high end system that would go above and beyond all others.

A major challenge was how to deliver high quality sound for every perceived use in a large, reverberant space, where the art deco architecture was going to be highlighted by taking it back to its original concrete. Fortunately Bill is an audiophile and a fan of the open, transparent sound of ribbon drivers. His introduction to Alcons Audio was at the annual International Cinema Technology Association (ICTA) seminar in LA.

“I was really intrigued by how Alcons had overcome the limitations of past pro-ribbon designs,” says Bill. “David brought over some Alcons nearfield monitors and, without any acoustic treatment, they sounded amazing straight out of the box. David’s demo showed that the Alcons pro-ribbon system would help to minimize unwanted reflections, because the speakers are so directional. Along with the dynamics, transparency and power handling, frankly it blew everyone away.”

The chosen system needed to deliver high end PA functionality as well as exceptional movie sound… and David proved that Alcons checked that box as well. “I set the bar pretty high for what we wanted and Alcons fulfilled all our criteria, with a fair bit in reserve,” says Bill. “We listened to a lot of systems, but Alcons was the only one that gave me no reason at all not to choose it.”

In the meantime, Peter Grueneisen of LA-based nonzero architecture – a company renowned for its high-end acoustic spaces – was brought in to help the architectural restoration and with taming the acoustics.

“We worked with Arup at the start to model the space, which helped us to choose the acoustic treatment. An entire year was spent building the infrastructure, to make sure we had the best playing field for the speaker system,” says Peter. “The fact that Alcons pro-ribbon systems are so focused was a huge help. It meant that it all fell into place very well. For a space that is so acoustically challenging, there were no major problems.”

“The Alcons pro-ribbon solution overcomes so many limitations of other cinema systems. There is something very special about being in a movie theater and being hit with high levels of undistorted sound. Very few systems can do that and I’m really excited about it,” says Bill. “It means no ear fatigue for the listener, gives us tremendous headroom and the CR4s give us five channels behind the screen for showing older formats.

“Alcons pro-ribbon systems are also extremely well made, with tremendous attention to detail and their customer service is top notch. It was much more than just a sale to them, they went way above and beyond what was expected, doing a lot of work to make sure everything was exactly right. With all of these positive qualities, Alcons offers exceptional value for money.”

“I’m really happy that we have one of the best-sounding rooms in town. It’s clean, intelligible and it has a lot of headroom,” adds Stay on Screen proprietor Levi Joos, “I’m proud of the fact that for the next 20 years people will come to Post 43 to enjoy movies with the very best sound.”

“We wanted to reinvent the space as a really high end movie theater and performance space. Without question Alcons delivered that. Frankly the system was impossible to say no to,” concludes Bill.