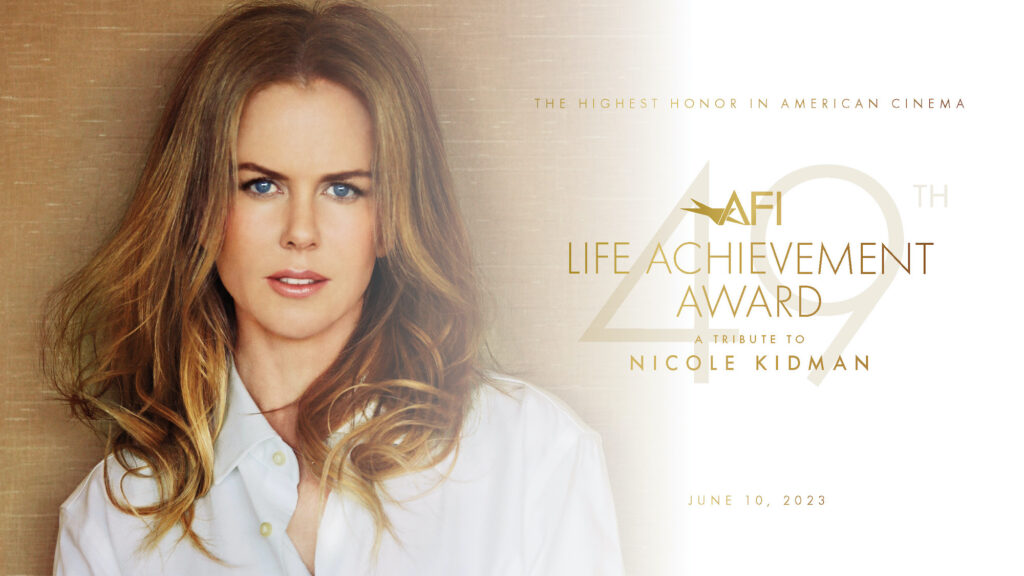 America’s Highest Honor for a Career in Film to Be Presented at Gala Tribute on June 10, 2023

The American Film Institute (AFI) Board of Trustees announced today that Nicole Kidman will be the recipient of the 49th AFI Life Achievement Award, the highest honor for a career in film, celebrating her career achievements thus far. The award will be presented to Kidman at a Gala Tribute at the Dolby Theatre in Los Angeles on Saturday, June 10, 2023. She is the first Australian actor to receive this honor.

“Nicole Kidman has enchanted audiences for decades with the daring of her artistry and the glamour of a screen icon,” said Kathleen Kennedy, Chair of the AFI Board of Trustees. “She is a force both brave in her choices and bold in each performance. AFI is honored to present her with the 49th AFI Life Achievement Award.”

Both a powerhouse performer, spellbinding movie star and accomplished producer, Nicole Kidman has captured the imaginations of audiences around the world throughout her prolific career, delivering complex and versatile performances onscreen. Seamlessly moving between independent and studio films, Kidman has earned a reputation for her extraordinary talent, commitment to her craft and desire to work with auteur filmmakers including Jane Campion, Sofia Coppola, Baz Luhrmann, Anthony Minghella, Sydney Pollack, Aaron Sorkin, Lars von Trier and Stanley Kubrick.

A five-time Academy Award nominee, Kidman’s wonderfully restrained and transformational turn as Virginia Woolf in THE HOURS earned her the Oscar® for Best Actress in 2003. Following her stunning breakthrough performance in 1989’s DEAD CALM, Kidman has captivated global audiences, from her daring performance as Alice Harford in EYES WIDE SHUT and enchanting Satine in MOULIN ROUGE!, to her raw turn as Grace Margaret Mulligan in DOGVILLE and her enthralling portrayal of Lucille Ball in BEING THE RICARDOS. Throughout her distinguished career, Kidman has won a BAFTA Award, two Emmys® and six Golden Globes – and is widely regarded as one of the finest actresses of her generation. She co-founded her production company Blossom Films in 2010.

In theater, Kidman made a highly-lauded London stage debut in the fall of 1998, starring with Iain Glen in “The Blue Room,” David Hare’s modern adaptation of Schnitzler’s “La Ronde.” For her performance, Kidman won London’s Evening Standard Award and was nominated in the Best Actress category for a Laurence Olivier Award. In 2015, Kidman was seen on the West End stage in Anna Ziegler’s “Photograph 51,” for which she received a London’s Evening Standard Award.

In January of 2006, Kidman was awarded Australia’s highest honor, the Companion of the Order of Australia. She was also awarded the Berlin Film Festival’s Silver Bear award for her performance in “The Hours.” In 2017, the Cannes Film Festival honored Kidman with the 70th Anniversary Prize for her body of work and longstanding history with the festival. She is one of only eight people to ever receive this honor.

Kidman has served as Goodwill Ambassador for UN Women for nearly two decades. Along with her husband, Keith Urban, she has helped raise millions over the years for the Stanford Women’s Cancer Program which is a world-renowned center for research into the causes, treatment, prevention, and eventual cure of women’s cancer.

Kidman’s many upcoming projects include Lulu Wang’s “Expats” for Amazon, “Aquaman and the Lost Kingdom” for Warner Brothers, “Lioness” for Paramount+, and “Holland, Michigan” for Amazon.