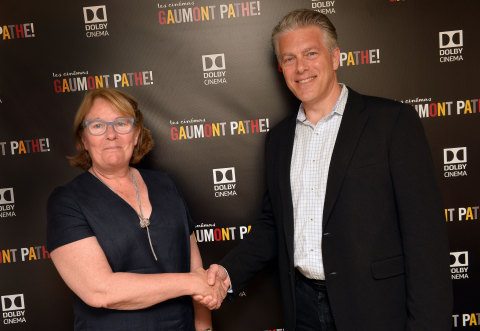 Dolby Cinema is a premium cinema offering for moviegoers that combines spectacular image and sound technologies with inspired design to deliver the total cinema experience, making every visit a completely captivating cinematic event.

“Les Cinémas Gaumont Pathé’s presence throughout France and the Netherlands will introduce Dolby Cinema to more consumers in Europe who seek out the best in entertainment,” said Doug Darrow, Senior Vice President, Cinema Business Group, Dolby Laboratories. “We are confident that moviegoers will go back again and again for the spectacular experience across all genres that only Dolby Cinema can deliver.”

“Dolby’s approach to offering a total premium cinema experience with Dolby Cinema is something we are eager to deliver to our customers throughout France and the Netherlands,” said Martine Odillard, Chairman of Les Cinémas Gaumont Pathé. “We look forward to working with Dolby to bring this first-class experience to movie lovers.”

Dolby Cinema features the Dolby Vision laser projection system, which uses state-of-the-art optics and image processing to deliver high dynamic range with enhanced color and a contrast ratio that far exceeds that of any other image technology on the market today. The result is a richer, more detailed viewing experience that delivers strikingly vivid, realistic images and makes viewers feel like they are in the movie’s world.

Dolby Cinema also includes Dolby Atmos sound technology, which moves audio around the theatre, even overhead, with amazing richness and depth. The combination of Dolbytechnologies with the design and comfort of the Dolby Cinema makes audiences feel closer to the onscreen action.

When these technologies are combined with the sophisticated Dolby Cinema design, everything comes together to pull moviegoers more deeply into the story and transform their visit into an event. In just over two years, more than 325 Dolby Cinema sites have been installed or committed to across the globe, with more than 85 titles released or announced. For more information, please visit the Dolby Cinema web page.

Les Cinémas Gaumont Pathé pairs the continuous modernization of its movie theaters with the never-ending pursuit of innovation. This quest for constant refinement rests on an active policy of construction, reconstruction and renovation of movie theaters and innovative projection technology.

Les Cinemas Gaumont Pathé is owned by Pathé, one of the biggest film producers in Europe and a major player in film distribution.

Dolby Laboratories (NYSE:DLB) creates audio, video, and voice technologies that transform entertainment and communications in mobile devices, at the cinema, at home, and at work. For more than 50 years, sight and sound experiences have become more vibrant, clear, and powerful in Dolby. For more information, please visit www.dolby.com.