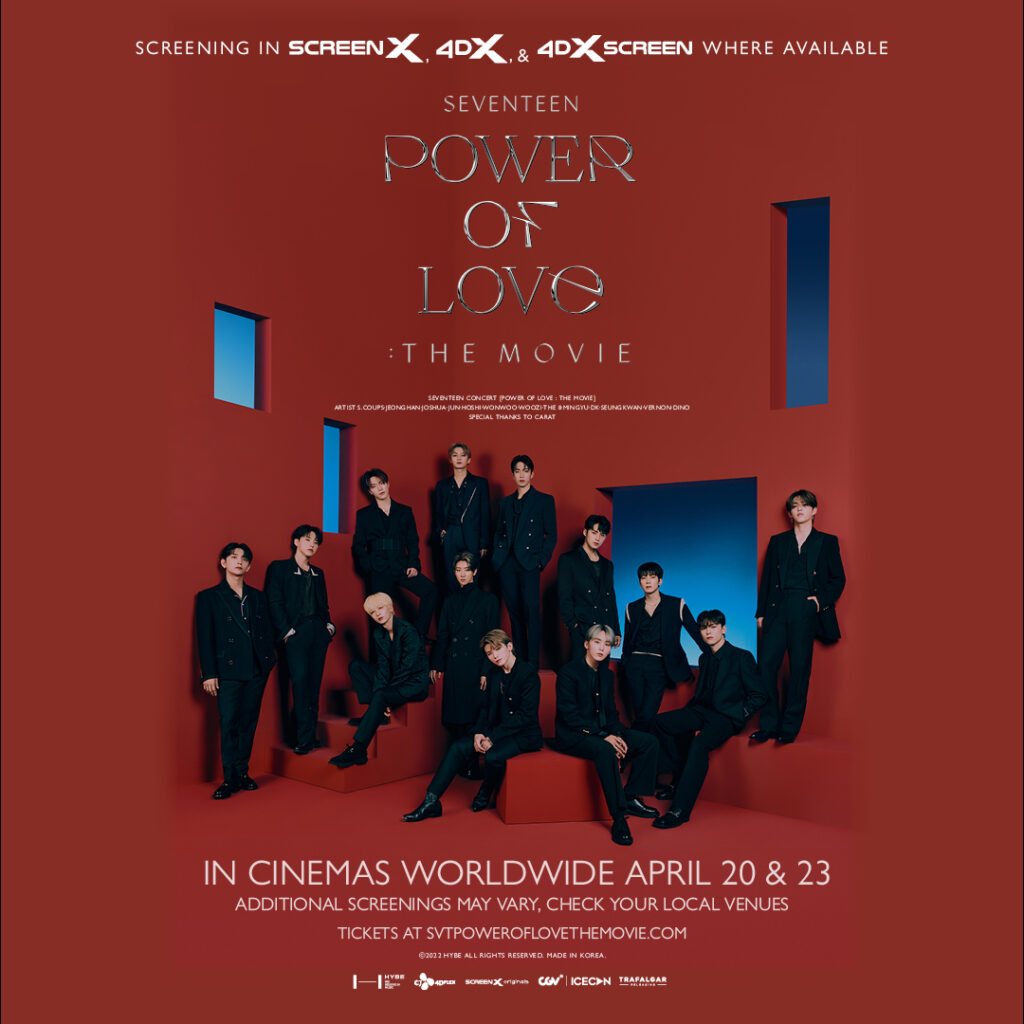 SEVENTEEN, K-pop’s Stage-Breakers rewriting K-pop history, are proud to present their first-ever movie, “Seventeen Power of Love: the Movie” in cinemas worldwide on Wednesday, April 20 and Saturday, April 23. Adored across the planet, SEVENTEEN’s devoted fans (known as “CARAT”) and music lovers will view powerful performances, in-depth interviews with the group’s members, and experience commentary regarding the group’s past and present, as well as the future they will create with CARAT new and old.

Tickets for “Seventeen Power of Love: the Movie” go on sale on Thursday, March 17 at 9 a.m. EDT / 6 a.m. PDT / 1 p.m. GMT / 2 p.m. CET / 8 p.m. WIB at svtpoweroflovethemovie.com. Where available, audiences around the world will be able to enjoy the film on various formats including “ScreenX,” an expanded three-screen system utilizing the front screen as well as the side walls of a cinema; “4DX,” the world’s first commercial multi-sensory cinema providing an experience as though in an actual live concert; and “4DX Screen,” a combination of both “ScreenX” and “4DX.” Fans are encouraged to sign-up at the official website for updates regarding tickets, participating cinemas, and more.

SEVENTEEN is composed of 13 diverse creatives, including S.Coups, Jeonghan, Joshua, Jun, Hoshi, Wonwoo, Woozi, The 8, Mingyu, DK, Seungkwan, Vernon and Dino. The K-pop superstars are a five-time million-seller in Korea, have charted No. 1 on Billboard’s Top Album Sales chart and No. 13 on the Billboard 200, and are dominating music charts across the globe, including hitting number one on the Japanese Oricon chart.

Marc Allenby, CEO Trafalgar Releasing said, “We’re excited to be collaborating once again with our partners at CJ 4DPLEX to bring K-pop sensations SEVENTEEN to the big screen. The group’s escalating success across the globe has been fascinating to see, and we look forward to bringing their first feature film to audiences worldwide, including screenings using CJ’s special formats ScreenX, 4DX and 4DX Screen.”

About CJ 4DPLEX
CJ 4DPlex is a leading, next-generation cinema technology company, headquartered in Seoul with international offices in Los Angeles and Beijing. The company has created immersive film technologies for cinemas worldwide that include ‘4DX’, ‘ScreenX’ and ‘4DX Screen’ for consumers to experience films in ways that were never before possible.

About 4DX
4DX provides moviegoers with an exciting, multi-sensory experience, allowing the audience to connect with movies through motion, vibration, water, wind, snow, lightning, scents, and other special effects that enhance the visuals on-screen. Each 4DX auditorium incorporates motion-based seating synchronized with 21 different effects and optimized by a team of skilled 4DX producers, maximizing the excitement of the movie, beyond the limits of audio and video. To date, there are over 783 4DX auditoriums around the world, spanning over 67 countries. For more information, please visit www.cj4dx.com

About ScreenX
ScreenX is the world’s first multi-projection system used within a cinema setting. It was created in 2012 by CJ CGV, part of South Korean conglomerate CJ Group, as one of the “next cinema formats” along with 4DX, the multisensory cinema technology with motion and environmental effects. ScreenX allows moviegoers to go beyond the frame of the movie screen by expanding the center image of feature films and pre-show advertising to create an immersive, panoramic, 270-degree format that projects onto three cinema walls. To date, there are over 383 ScreenX auditoriums including 4DX Screen around the world in 38 countries. ScreenX was recognized as the “Innovator of the Year” at ShowEast 2018. For more information, please visit www.screenxmovies.com.

More information about Trafalgar Releasing can be found at www.trafalgar-releasing.com.

About Seventeen
Racking up 2 billion streams and selling 10 million albums, SEVENTEEN—comprised of S.Coups, Jeonghan, Joshua, Jun, Hoshi, Wonwoo, Woozi, The 8, Mingyu, DK, Seungkwan, Vernon and Dino — has rocketed to the forefront of the music scene fueled by a fiercely independent spirit and a nonpareil in-house creative ecosystem. The group’s innovative structure hinges on the interplay of three units: hip-hop, vocal, and performance. Living up to the title of “K-pop Stage-Breakers,” SEVENTEEN has unassumingly made history and become one of the biggest groups ever due to their world-class synchronization, jaw-dropping choreography, and tight teamwork. Moving at an unparalleled pace, the K-pop Stage-Breakers made their U.S. television debut on The Late Late Show with James Corden in January 2021 and followed it with unforgettable performances on The Kelly Clarkson Show, The Ellen DeGeneres Show, Jimmy Kimmel Live! and MTV’s Fresh Out Live. SEVENTEEN’s latest EP Attacca debuted at No. 1 on Billboard’s Top Album Sales chart and No. 13 on the Billboard 200. It sold over 1.3 million copies in the first week of release, earning the K-pop superstars the “quintuple million seller” title as it joins their last four consecutive releases—An Ode, Heng:garæ and ; [Semicolon], Your Choice—in selling over 1 million copies each.

About HYBE
HYBE, formerly known as Big Hit Entertainment, is an entertainment lifestyle platform company that innovates the music industry under the mission “We believe in music”. The company was listed on the KOSPI Market of Korea Exchange (KRX) in October 2020. HYBE has established its business ventures in entertainment lifestyle upon three pillars. The label division brings creatives centered around music and artists such as BTS, TOMORROW X TOGETHER, SEVENTEEN, ENHYPEN and ZICO. Solution operates specialized business units for video content, IP, learning and games. The platform division connects and expands all of HYBE’s contents and services. Based on organic operations and synergies created in each field, HYBE aims to create top-notch content, expand fan experience, and make a difference for anyone who enjoys a music-based entertainment lifestyle.