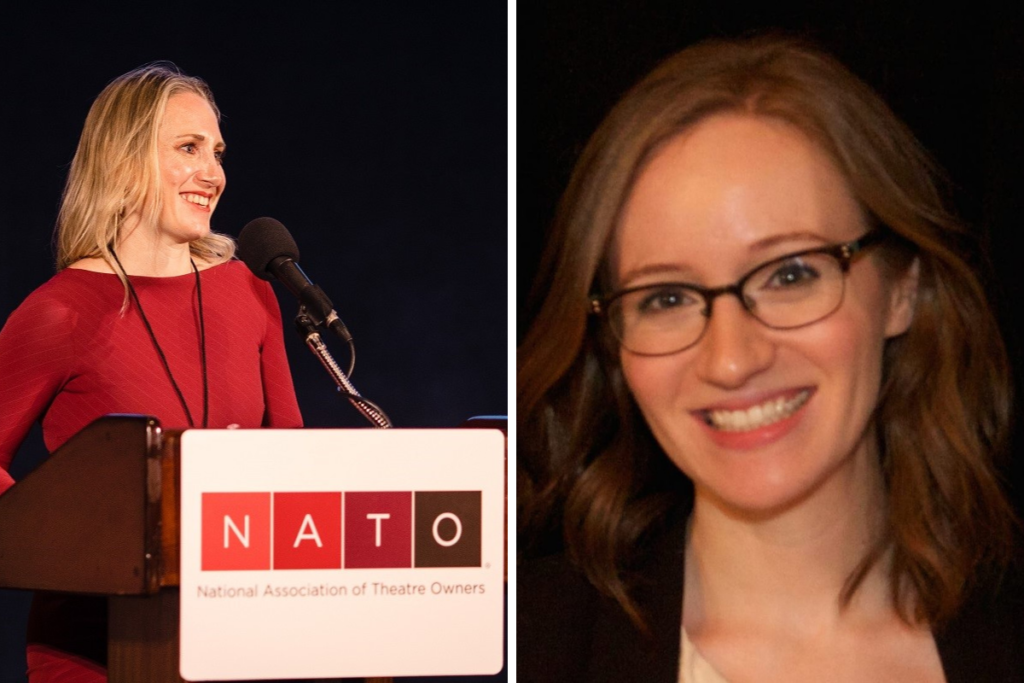 Jackie Brenneman, Executive Vice President & General Counsel of the National Association of Theatre Owners, and Esther Baruh, former NATO Director of Government Relations, have been selected as the 2022 recipients of the Ken Mason Inter-Society Award. The Ken Mason Award honors individuals who have made outstanding long-term contributions leading to the overall improvement of the motion picture experience. The announcement was made today by Mark Collins, President, The Inter-Society for the Enhancement of Cinema Presentation, Inc. Brenneman and Baruh will receive the award at a ceremony held on Tuesday, February 22 at the ICTA Seminar Series LA at the Universal Hilton.

As it became clear that the pandemic would not be short-lived and that movie theaters’ long-term survival was in jeopardy, Brenneman and Baruh, in the summer of 2020 identified potential pandemic relief funding in the Save Our Stages Act, joined in a coalition with the National Independent Venues Association, secured additional funding to cover movie theaters, lobbied Congress, rallied theater owners and Hollywood supporters, and saw through the passage of $16 billion of Federal grants through the Shuttered Venue Operators Grant program in December. Then the real work began.

The pair worked closely with the Small Business Administration to ensure a process that was fair and workable. Amid bureaucratic misunderstandings and delays, Brenneman and Baruh continued to lobby politicians to pressure the SBA to speed the process and fairly evaluate grant applications. The grants began to be processed and funded in June 2021.

Throughout the process, seemingly around the clock, Brenneman and Baruh educated theater owners on the process and assisted in grant applications and appeals and lobbied the SBA fiercely to adhere to the spirit and the letter of the grant legislation. Through their efforts 1,645 movie theater companies have received $2.47 billion dollars in grants to date.

Brenneman joined NATO in October 2014 from the law firm Foley Lardner LLP as Manager of Industry Relations, specializing in technology issues. As part of her duties, she also served as Executive Director of Inter-Society. Baruh joined NATO in March 2014 as Manager of Government Relations, overseeing NATO’s lobbying efforts. She left NATO in September to move to Italy.

“Jackie and Esther have always been valuable and highly regarded members of the NATO team in their respective roles,” said NATO President & CEO John Fithian. “But there is no ordinary job description that encompasses what they have accomplished in the last year and a half. They have, to put it plainly, saved the industry. I cannot think of anyone more deserving of this honor.”

About Inter-Society
The Inter-Society for the Enhancement of Cinema Presentation, Inc. promotes interactive dialogue and information exchange between cinema-related entities with the goal of resolving issues affecting the overall cinema presentation. Founded in 1978 by Eastman Kodak VP Ken Mason, membership is composed of its four charter trade organizations – International Cinema Technology Association (ICTA), the Motion Picture Association of America (MPAA), the National Association of Theatre Owners (NATO), and the Society of Motion Picture and Television Engineers (SMPTE) – along with over 40 member companies, made up of trade organizations, motion picture studios, exhibition companies, manufacturers, technical consultants and other industry stakeholders.