Introducing the Cinema of the Future: Cineplex Announces Junxion 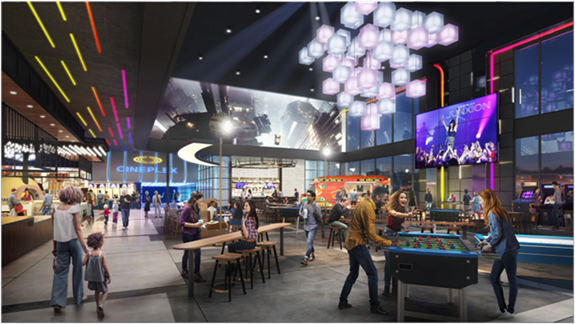 Continuing its legacy as a leader in entertainment innovation, today Cineplex announced plans for Junxion, a first-of-its-kind concept that is a movie theatre, dining destination and entertainment complex – all in one place. Offering immersive and shared experiences for movie-lovers and entertainment-seekers alike, Junxion will be the complete night out for guests of all ages, including teens, millennials, their friends and families.

Introducing Junxion
Junxion’s state-of-the-art cinemas will offer a range of movie-going experiences, including UltraAVX and comfortable recliners where guests can have food and drinks delivered right to their seats. In addition to the theatre experience, Junxion is the perfect entertainment destination for any occasion. It will feature an open lobby for events and performances, a stage for live music, space for outdoor screenings, and an amusement games and attractions area. Along with new and classic video and redemption games, guests can enjoy the latest interactive experiences like virtual reality from VRstudios. An evening of fun is sure to work up an appetite, so guests can look forward to a range of dining experiences at Junxion’s food hall, including fresh and tasty food options, an indoor food truck and a bar featuring handcrafted cocktails, wine and craft beer.

Junxion guests will have their pick of exciting programming and events, including live music, trivia nights, game nights, outdoor screenings of movies and live TV events and more. Plus, SCENE members will earn points with every Junxion visit, which they can redeem for food, game credits or a trip to the movies.

“Junxion is where Cineplex’s famous movie-going experience meets our innovative entertainment offerings. It will bring together the best of both worlds and provide guests with an unforgettable and unmatched social experience,” said Ellis Jacob, President and CEO, Cineplex. “As Canada’s entertainment landscape continues to evolve, we are proudly introducing this state-of-the-art community hub where families and friends can come together to play, dine, unwind and have fun.”

First Location Coming Soon
Working in partnership with Cushman & Wakefield, the first location will be at Erin Mills Town Centre in Mississauga, Ontario, as part of the Centre’s ongoing redevelopment. 45,000 square feet will include six auditoriums, a food hall featuring an indoor food truck, amusement gaming, a space for live events and an outdoor screen on a rooftop patio. The brand-new complex is targeted to open in late 2020.

Cineplex plans to open similar entertainment destination locations across Canada in the coming years, leveraging retrofits of its existing theatre network as well as new locations, including at Kildonan Place in Winnipeg, Manitoba. Cineplex now operates 165 theatres across the country, including its popular VIP Cinemas experience. The company also operates seven locations of The Rec Room, Canada’s epic destination for Eats and Entertainment, and two locations of the reinvented Playdium entertainment complex, the ultimate spot for teens, their friends and families to play without limits.

Proudly recognized as having one of the country’s Most Admired Corporate Cultures, Cineplex employs approximately 13,000 people in its offices across Canada and the United States.?To learn more visit Cineplex.com or download the Cineplex App.