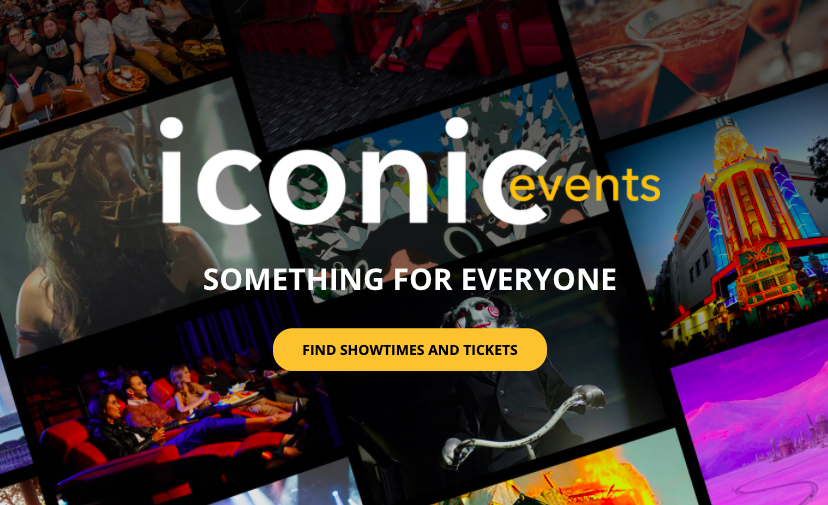 The fast-growing event cinema company Iconic Events announced today that the company has enlisted theatrical circuits representing over 1,000 locations to the expanding network of theaters playing its programming, and that Steve Bunnell, the respected theatrical distribution and exhibition veteran, is coming on board to lead Iconic’s growth efforts as chief executive officer. The announcement was made by Iconic Events Executive Chairman Michael Lambert.

Iconic Events was formed last year by Lambert, a longtime owner of movie theaters, along with former Cinemark CEO Tim Warner and several leading media, exhibition, and entertainment industry entrepreneurs with extensive experience in the industry. The event cinema company was quietly launched after Lambert and Warner consulted with key members of the community, who enthusiastically endorsed the need for exhibition to have more programming choices for their theaters and have since signed up to be part of the Iconic network.

Iconic Events has already become a significant distributor of live sports events and other unique and desirable fan favorite programs. Iconic is focused on working with its theater partners and expanding the variety and types of event cinema content presented in their auditoriums. Event cinema programming includes on stage access to rare concerts, live Q and A’s for premieres of new movies, cast reunions of classic movies, anime, premiere episodes of beloved series from networks and streamers, and even regional and local sports.

Event cinema, defined as non-traditional entertainment released in theaters as special limited-engagement event programming, is the fastest growing segment in exhibition in the United States.

Event cinema’s audience is five times larger in Europe and other international markets than in the U.S. The appointment of Bunnell, one of the industry’s most accomplished and recognized veterans, to lead this new venture is a further sign of Iconic’s commitment to capitalizing on the potential growth opportunity and increased demand for specialized content in this sector. Live and special event programming is built on activating content-specific fandoms and followings, who will share the excitement of new content.

“Iconic Events has had an incredible start by securing the rights to UFC fights, live boxing matches, and other highly desirable and marketable content for distribution to our growing network of movie theaters,” said Lambert. “Steve Bunnell understands the business like few others. His special vision for expanding live and other content through his relationships and experience on both sides of the theatrical aisle at Cinemark, Uni- versal, Regal, and most recently Alamo Drafthouse, makes him uniquely qualified and perfectly suited to lead Iconic as we broaden our programming and extend into categories including concerts, music videos, live Q and A’s for premieres of new movies, cast reunions of classic movies, anime, premiere episodes of beloved series from networks and streamers and even regional and local sports.”

“Now, more than ever, theaters need the additional programming choices like those being offered by Iconic. We already have access to over one thousand theaters representing nearly ten thousand screens in the US, with more live-capable theaters being added every day,” said Bunnell. “There’s enormous potential for growth in this sector of the business in the United States by making this content broadly available to any and all exhibitors, and I’m tremendously excited to be leading Iconic’s efforts. Putting optionality into the hands of exhibition and giving them more choices for their customers couldn’t be more important.”

Fueling growth in the Iconic network is a no-strings approach to building long term relationships with partners. “More and more, the multiplex is seen not just as a local theater. It is a community entertainment center and an event destination. We are delighted to have such fantastic response from our community – they understand their customers want more event cinema in their theaters, and more importantly, they understand the upside for their bottom line – especially right now, when every dollar counts,” said Bunnell.

Iconic Events has already seen significant success with live UFC events, starting in January with the Connor McGregor/Dustin Poirer fight. The company has quickly grown from just a dozen test locations to over 150 live event-capable theaters that brought the most recent UFC live event to audiences this past weekend. Iconic will also bring audiences the super middleweight fight between Canelo Alvarez and Billy Joe Saunders on May 8 through a new partnership with DAZN, and will bring the rematch of McGregor/Poirer to theaters in the just-announced UFC event on July 10.

Behind Iconic Events is a world-class team of industry leaders. Founded by Michael Lambert, Mark Rupp, Steven Menkin, and Tim Warner, Iconic is dedicated to bringing live and other special events programming to movie theaters.

STEVE BUNNELL is one of the most respected studio executives in the industry and has strong relationships with both exhibition and distribution. His extensive knowledge of the theatrical landscape in the U.S. as well as Latin America has given him a unique perspective in providing a global overview. He joins Iconic Events from Alamo Drafthouse, where he served as SVP, Film Content Buying Licensing, responsible for booking decisions at the chain. He previously served as chief content officer at Regal Entertainment Group, where he led all programming decisions for their 560 locations nationwide, and as EVP/general sales manager for Universal Pictures, where he determined release dates, created distribution plans, and set the sales policy for all Universal films in the domestic marketplace. Bunnell’s prior exhibition experience also included six years as chief content officer for Cinemark based in Dallas and served as head film buyer at Loews Cineplex Theaters in New York City.

MICHAEL LAMBERT has spent the last 40 years in public and private companies acquiring, managing, and growing US and international media and technology businesses, including broadcasting, cable and channel development, digital spectrum management, film and television production and distribution, music, and cinemas. On the film side, Lambert was co-owner and co-chairman of Village Roadshow Pictures Group and for over 25 years has been an owner/operator of exhibition companies including Act III Cinemas, Gold Class Cinemas (sold to iPic), Studio Movie Grill, and Rave Cinemas (sold to Cinemark). Earlier in his career, he served as 20th Century Fox’s president, Domestic Television, responsible for TV production and distribution in the US; executive vice president of HBO, responsible for the co-financing and worldwide distribution of HBO film and television, and president, Viacom, Domestic Television, where he was responsible for US television distribution and new media, including the company’s early activities in cable television.

TIM WARNER is the former CEO of Cinemark, one of the leading exhibition companies in the world, operating 504 theaters, with 5,794 screens in 14 countries. He joined Cinemark in 1996 as senior vice president and president of Cinemark International, leading Cinemark’s efforts to build its international operations for over 10 years. He was later promoted to president and COO of the company, and then CEO and board member as Cinemark became the number one-attended theatrical exhibition company in the world.

MARK RUPP, Iconic Events’ CFO/COO, is seasoned executive with over 20 years of public and private company experience in the telecommunications and media & entertainment industries. Rupp spent 13 years at Verizon, ultimately as head of Mergers and Acquisitions, then served as executive vice president of Triton Cellular Partners and as chief operating officer of one of the nation’s largest municipal wi-fi systems, known as Wireless Philadelphia. He then became co-founder, director, president & COO of SpectiCast, one of the fastest growing producers, financiers, distributors, and marketers of event cinema worldwide. He went on to serve as managing director of CineLife Entertainment, which delivers world-class event cinema programming to art houses, luxury cinemas, and commercial theater networks.

STEVEN MENKIN has over 30 years of industry experience as a producer of 17 feature films, documentaries, and TV series, and as a distributor and marketing executive. He has worked with nearly every major studio and the leading independents in the film and entertainment industry. Through his marketing companies Deliver Your Audience and Ingaged, Menkin is an acknowledged and sought-after innovator in consumer digital marketing. With the utilization of the proprietary Open Social marketing tech platform, he has launched over 400 social and digital campaigns that activate, engage, and capture the sharing networks of fans and influencers across social media, which result in direct-to-audience fan databases for Hollywood studio clients including Universal Pictures, Sony Pictures Entertainment, Warner Bros., Lionsgate Films, Fox Television, Fathom Events, Focus Features, Roadside Attractions, and CBS Films. His book publishing clients include Penguin Random House, Dutton, Putnam, Houghton Mifflin Harcourt, St. Martin’s Press, Hachette, Macmillan, and Doubleday.

Iconic is working with content rights holders to distribute fresh and unique programs to satisfy ever-changing moviegoer demands and is focused on some of the most successful genres in event cinema, including live sports and music, anime, new and classic films, fine arts, faith-based programming, talent commentaries, and other added value content. In addition, Iconic is working with musical artists to develop events around album drops, giving them access to a premium communal experience coast to coast, in cities large and small.

For information on the company, or updates on future Iconic Events programs coming to theaters near you, visit www.iconicreleasing.com