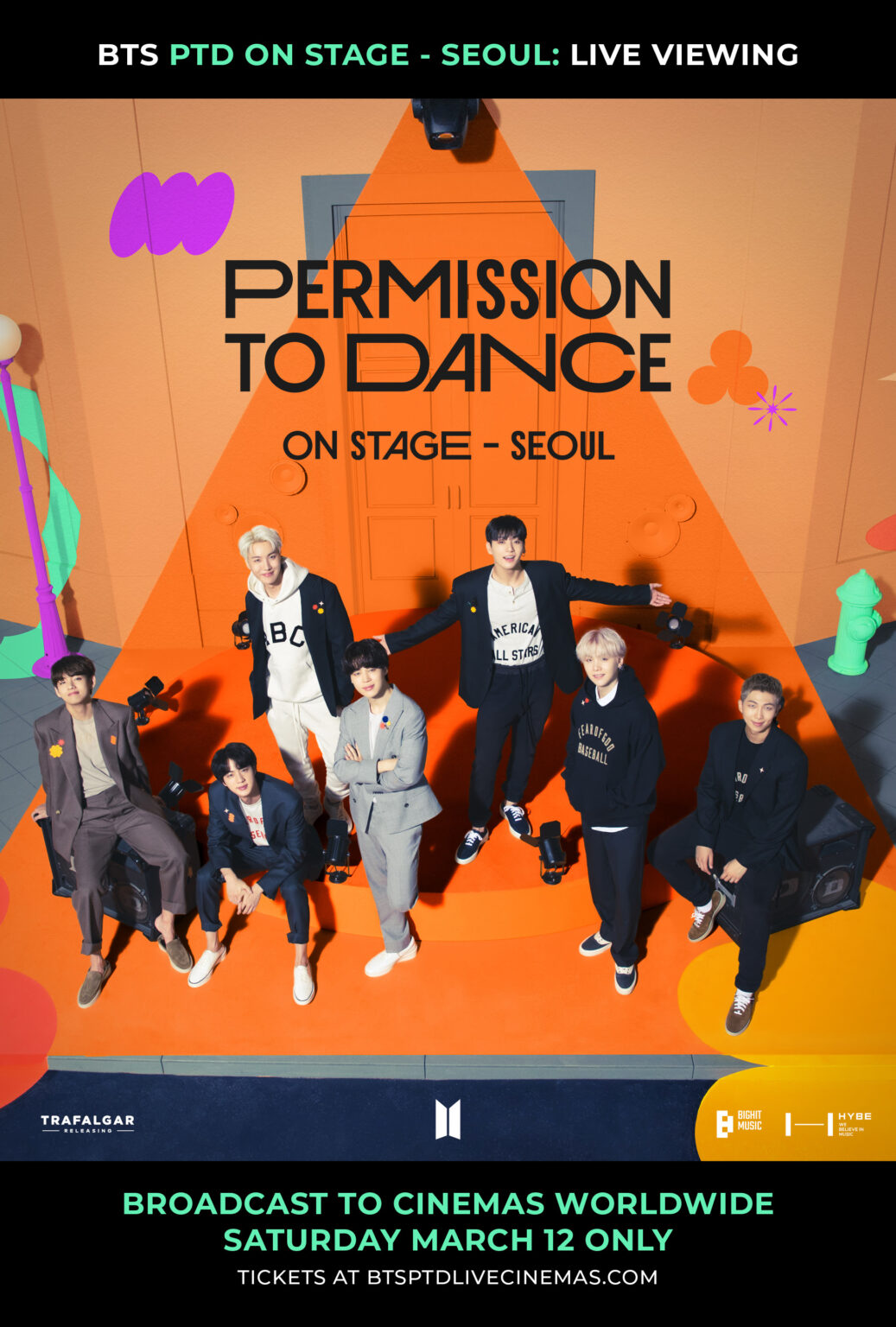 Presented in Cinemas Worldwide by Trafalgar Releasing on March 12

The worldwide release date for “BTS Permission to Dance On Stage – Seoul: Live Viewing”, the latest cinema event from 21st century pop icons BTS, has been confirmed for Saturday, March 12. People worldwide will join in as BTS and ARMY become one once again with music and dance in this unmissable live concert experience broadcast from Seoul to cinemas around the world. “BTS Permission to Dance On Stage – Seoul: Live Viewing” marks the group’s long-awaited and triumphant return to a stage in South Korea in front of a live audience for the first time since 2019. Don’t miss BTS – RM, Jin, SUGA, j-hope, Jimin, V, and Jung Kook – on the big screen in local cinemas in more than 60 countries/regions on March 12.

Tickets for “BTS Permission to Dance On Stage – Seoul: Live Viewing” go on sale in North America, South America, Europe, and Oceania on Tuesday, February 22 at 10 a.m. EST / 7 a.m. PST at btsptdlivecinemas.com. Signing-up is encouraged for updates regarding tickets, participating cinemas, and more information at the official website. Screening and ticket information will be posted on February 22 at 10 a.m. EST / February 23 12 a.m. KST. Tickets for Asia go on sale on Thursday, February 24 at 10 a.m. KST at btsptdlivecinemas.com.

“BTS Permission to Dance On Stage” is the latest world tour series headlined by BTS, featuring powerful performances and the greatest hit songs from throughout their incredible career. The group’s most recent Los Angeles concerts, “BTS Permission to Dance On Stage – LA” were seen by approximately 813,000 people across the four sold-out shows and livestream, making them some of the most successful shows in 2021.

“We look forward to continuing our longstanding relationship with HYBE and BTS with this world-first live cinema broadcast of “BTS Permission to Dance On Stage” concert, coming direct from Seoul to cinemas around the world on March 12,” said Marc Allenby, CEO of Trafalgar Releasing. “BTS have always shared a special connection with ARMY, and we are proud to bring them closer than ever through the group’s awe-inspiring stage show live on the big screen.”

About BTS
BTS, an acronym of Bangtan Sonyeondan or “Beyond the Scene,” is a GRAMMY-nominated South Korean group that has been capturing the hearts of millions of fans globally since its debut in June 2013. The members of BTS are RM, Jin, SUGA, j-hope, Jimin, V, and Jung Kook. Gaining recognition for their authentic and self-produced music, top-notch performances, and the way they interact with their fans, BTS has established themselves as 21st century pop icons breaking countless world records. While imparting a positive influence through activities such as the “Love Myself” campaign and the UN ‘Speak Yourself’ speech, the band has mobilized millions of fans across the world (named ARMY), collected six No.1 Billboard Hot 100 singles in a span of a year and just over a month, performed multiple sold-out stadium shows across the world. They were also named TIME’s Entertainer of the Year 2020. BTS was nominated two years in a row for Best Pop Duo/Group Performance at the 63rd and 64th GRAMMY Awards and has been recognized with numerous prestigious awards like the Billboard Music Awards, American Music Awards (Artist of the Year 2021) and MTV Video Music Awards.

More information about Trafalgar Releasing can be found at www.Trafalgar-Releasing.com.

About HYBE
HYBE, formerly known as Big Hit Entertainment, is an entertainment lifestyle platform company that innovates the music industry under the mission “We believe in music”. The company was listed on the KOSPI Market of Korea Exchange (KRX) in October 2020. HYBE has established its business ventures in entertainment lifestyle upon three pillars. The label division brings creatives centered around music and artists such as BTS, Tomorrow X Together, Seventeen, Enhyphen and Zico. Solution operates specialized business units for video content, IP, learning and games. The platform division connects and expands all of HYBE’s contents and services. Based on organic operations and synergies created in each field, HYBE aims to create top-notch content, expand fan experience, and make a difference for anyone who enjoys a music-based entertainment lifestyle.