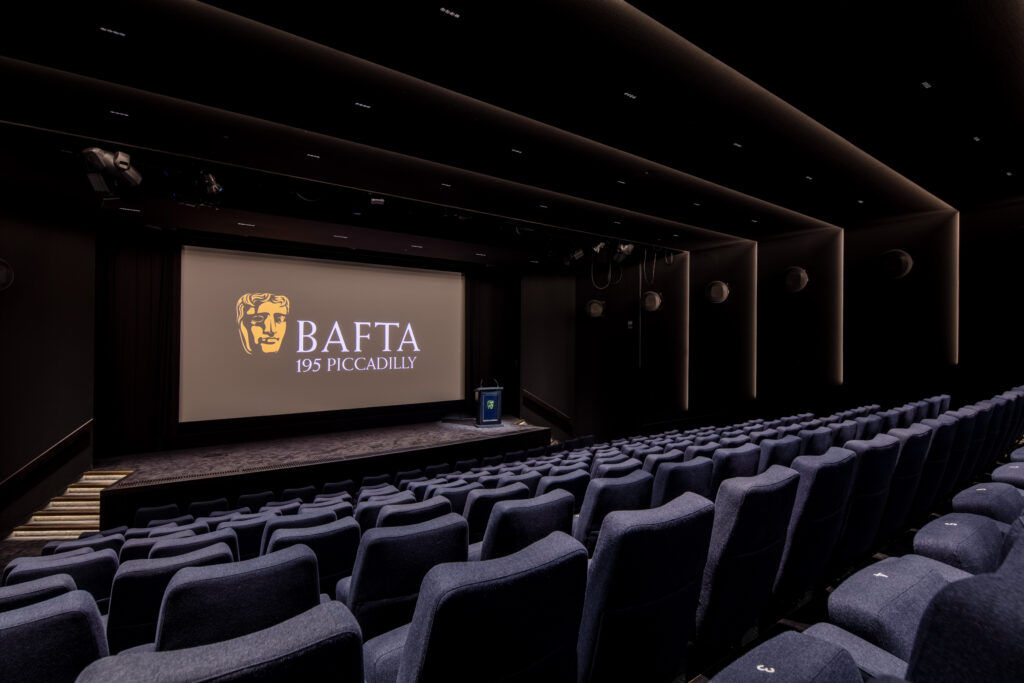 BAFTA’s headquarters have been redeveloped to double the building’s capacity and install state-of-the-art technology throughout. The project will also create an entire floor devoted to BAFTA’s learning and new talent programmes, enabling the charity to support more than 80,000 people to develop careers in the creative industries each year.

Harkness, which has a regional office in Stevenage, corporate headquarters in Dublin, and manufacturing plants in France, India, China and the USA, has donated two screens to BAFTA for two of its theatres at 195 Piccadilly, London.

The Harkness screens, both Mini Perforated, were a Matt Plus at 10.4m x 4.70m in the Princess Anne Theatre (pictured left), which has also been upgraded to a Dolby Theatre, and a High Contrast Grey Preview at 4.70m x 2.02m, in the Run Run Shaw Theatre (pictured right).

BAFTA’s head of property, Pauline Campbell, said: “Harkness have very kindly gifted two cinema screens to the redevelopment of our headquarters which will create some fabulous spaces to enable us to take to the next level our programme of support for newcomers to the creative industries.”

195 Piccadilly will be a creative centre for film, games and television and the central hub for BAFTA’s UK-wide, and global, learning and talent development programme. BAFTA works throughout the year to find and promote the next generation of talent and to break down the barriers that can make it hard to build careers in the creative industries. Visit www.bafta.org.

About BAFTA
BAFTA is a world-leading independent arts charity that brings the very best work in film, games and television to public attention and supports the growth of creative talent in the UK and internationally. Through its awards ceremonies and year-round programme of learning events and initiatives – which includes workshops, masterclasses, scholarships, lectures and mentoring schemes in the UK, USA and Asia – BAFTA identifies and celebrates excellence, discovers, inspires and nurtures new talent, and enables learning and creative collaboration. BAFTA is a registered charity (no. 216726).