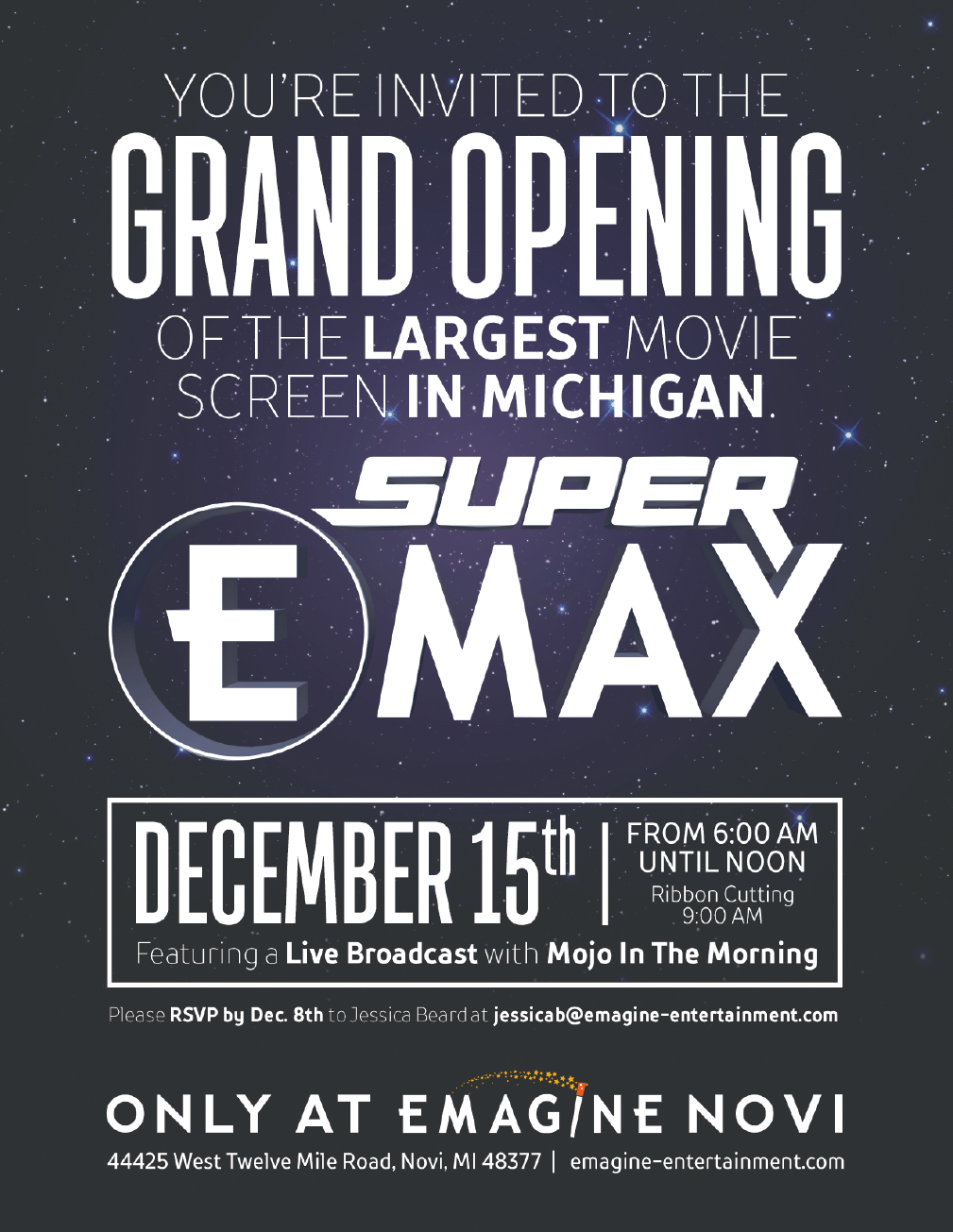 Emagine Entertainment, Inc., one of the nation’s leading innovators in motion picture exhibition, is pleased to unveil the largest movie screen in the State of Michigan, Emagine’s Super EMAX, located exclusively at its Novi location.  Emagine Novi’s overall remodeling project is now almost complete and the newly refurbished theatre will set a new standard in movie theatre amenities and guest comfort while providing an impeccable movie-going experience.  The Grand Opening celebration of Emagine’s Super EMAX will take place beginning at 6:00 a.m. on Friday, December 15. The official ribbon cutting will be at 9:00 a.m. followed by the first showing of the most anticipated movie of the year, “Star Wars: The Last Jedi.”

Emagine’s theatre in Novi was the company’s first foray into metropolitan Detroit, opening in October 2002.  Its ownership has invested over $5.0 million to renovate and refresh the theatre throughout, including the introduction of the new Super EMAX screen.  The venue’s revitalization features ultra-luxurious amenities throughout including 1,400 powered reclining chairs separated by a spacious seven feet of row spacing, sight lines that have been computer modeled to ensure every seat in the venue has ideal views, upscale décor throughout, an enlarged “E-Bar” sit-down bar, new restrooms, new ticketing counters, soft seating areas, and a new concession menu featuring expanded food choices.  Modeled after the success of its recently remodeled venues in Canton and Birch Run, Emagine Novi has been transformed into a state-of-the-art 21st Century ultra-luxury theatre.

Emagine’s Super EMAX was created by combining two smaller auditoriums and expanding the overall building footprint.  The screen itself, measuring 92 feet wide by over 48 feet tall, will be the largest movie screen in the State of Michigan and only comparable nationwide to the TCL Chinese Theatre IMAX in Hollywood.  With the opening of its Super EMAX, Emagine is proud to introduce another innovation to the Michigan market: ultra-bright crisp Christie 4K RGB laser imagery.  It will be paired with a 64-channel Dolby Atmos immersive audio system and further enhanced with a QSC Core 110f, a multipurpose software-based digital audio signal processor that delivers the benefits of QSC’s Q-SYS solution.  Used in conjunction with QSC’s DPA-Q Series amplifiers and SR Series surround loudspeakers, the Core 110f provides bass management for low frequency content in all of the Dolby Atmos surround channels.  Bass management combines the low frequency sound content that is directed to the surround speakers and sends it instead to special surround subwoofers.  The Core 110f also provides Intrinsic Correction™, which is special QSC laboratory-derived sound processing that guarantees optimal performance from any QSC loudspeaker.  The combination of the aforementioned technology should create the most awe-inspiring movie experience in the Midwest.  Emagine’s Super EMAX will feature 300 luxury reclining chairs with a special front row of cuddle chairs, another innovation designed by Co-Founder and CEO, Paul Glantz.

A Grand Opening celebration of Emagine’s Super EMAX will take place Friday, December 15, with an official ribbon cutting at 9:00 a.m., which is open to the public and media.  The first movie in the Super EMAX auditorium a paid ticketed showing, will commence at 9:30 a.m. with “Star Wars: The Last Jedi.”

Special engagement adult Super EMAX tickets, like those for “Star Wars: The Last Jedi,” will be priced at $11.00 for matinees and $15.00 for shows starting after 6:00 p.m.  Non-special engagement adult tickets to Emagine Novi’s Super EMAX auditorium will be priced at $8.00 and $12.00 for matinee and evening shows, respectively. Tickets are available at www.emagine-entertainment.com, at in-theatre lobby kiosks, the box office, and on Emagine’s Smartphone app.

About Emagine Entertainment
Emagine Entertainment’s affiliates own and operate luxury theatres in Michigan, Illinois, and Minnesota.  Emagine operates theatres with a combined 24,000 seats and 206 screens.  Emagine has led the way in bringing luxury theatres to the metropolitan Detroit market.  Emagine enjoys the honor and distinction of being named “Best Movie Theatre” for several years running by the Detroit Free Press, Hour Detroit Magazine, the Detroit News, and WDIV television.

Emagine is a recognized innovator in the theatrical exhibition industry having been the first theatre chain in the world to convert to 100% digital projection.  In 1997, Cinema Hollywood (now Emagine Birch Run) was the first theatre in Michigan to open with all stadium seating.  Paul Glantz, Co-Founder and CEO of Emagine Entertainment, has been interviewed on CNN concerning his views and opinions on the operation of luxury theatres.  Emagine’s luxury experience incorporates not only reclining chairs but also gourmet snacks, reserved seating, in-seat service and other upscale amenities such as valet parking.  All Emagine Theatres offer adult patrons the option of enjoying their favorite cocktail, beer or wine while concurrently maintaining a genteel and welcoming environment for families.

Emagine Entertainment has an excellent management team that maintains a high standard of guest service and a fastidious attention to cleanliness in its theatres. Emagine’s management team has established themselves as recognized leaders in quality and in providing their guests with the best possible movie-going experience.