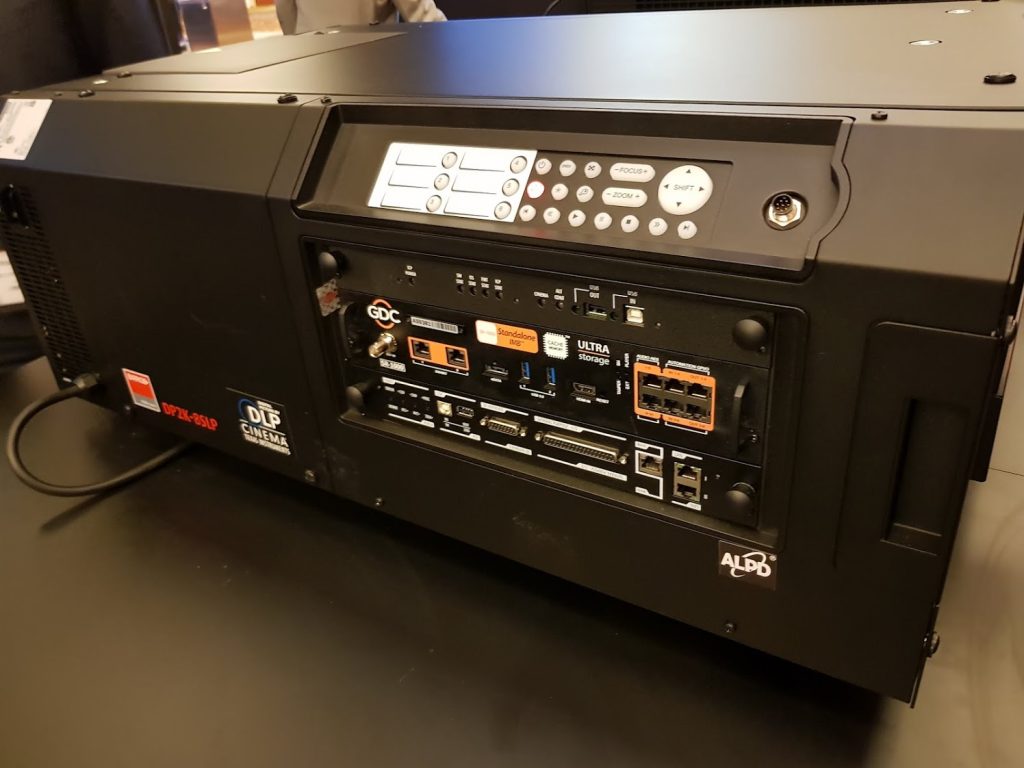 By leveraging on GDC’s 18 years of R&D in media server and its profound knowledge in cinema operations, SR-1000 IMB is designed from scratch by using the latest and most powerful semiconductor and power electronics used in medical and military products. SR-1000 is a very important milestone for GDC and cinema operations with a number of breakthrough features. It introduces a new feature known as CineCache™ (built-in cache memory) that allows content playback in the absence of a local HDD storage. Another important feature is Ultra-Storage that enables the content management and playback of over a thousand movies from a central server with CA2.0 technology. The elimination of content ingestion to each and every auditorium’s media server is an important breakthrough in cinema operation; it significantly reduces downtime and saves both time and money. SR-1000, which uses semiconductors designed for medical and military products, recently passed the most stringent QA program conducted by the world’s leading inspection, verification, testing and certification company. SR-1000 IMB also received Digital Cinema Initiative (DCI) compliance in March 2018.

SR-1000 and SX-4000 feature a completely new user interface (UI), enabling SMS to be used remotely through a web browser. By detaching the UI from a touchscreen monitor that is closely tied to the IMB, the SMS can now run remotely on a cellphone, iPadâ, tablet, laptop or PC with a browser.

The SR-1000 IMB seamlessly integrates with series 1, 2 and 3 DLP Cinemaâ projectors including Barco, Christie and NEC which will be demonstrated at CinemaCon 2018. This latest technology designed for near zero-maintenance is made available to all the three generations of projectors using one common media server UI.

GDC CA 2.0 incorporates the SCL-2000 Centralized Storage Playback Solution, an integrated centralized storage and playback system designed to streamline content management, and leverages machine intelligence to increase efficiency by several orders of magnitude while dramatically reducing the need for human intervention. The SCL-2000 is truly a game-changer in that it is the world’s first solution that is capable of playback of 1,000 movies to as many as 14 screens from a centralized server, greatly increasing programming flexibility and eliminating the need for local storage.

The combined solution of SR-1000 IMB and Cinema Automation CA2.0 is the world’s first local HDD storage-free solution to increase efficiency and quality of cinema management. Both SR-1000 and Cinema Automation CA2.0 are available in market for order now; CA2.0 has already been deployed and proven with 20 multiplexes with SR-1000, SX-3000 and SX-4000 IMB in China, Hong Kong, India, Malaysia, Singapore and US.“This is one of the most important milestones in GDC history,” said Man-Nang Chong, founder, chairman and CEO of GDC Technology Limited. SR-1000 and CA2.0 are a quantum leap in digital cinema operation based on DCI specified media server. It took nearly three years to develop the most efficient media server solution to integrate with every DLP Cinemaâ projector model from the original Series 1 to the upcoming Series 3 platform. We are honored to herald the cinema operation into a new era.”

Be amazed by the showcase

Live demonstrations of a 14-screen megaplex with the CA2.0 and SR-1000 and SX-4000 IMB will be staged at the GDC futuristic booth from April 24 to 26 to showcase this unparalleled product solution.

Standalone Integrated Media Block and CineCache are trademarks or registered trademarks of GDC Technology Limited. All other trademarks remain the property of their respective owners.