From Viewable to Viewed: the Reality of Attention for Ads Unveiled 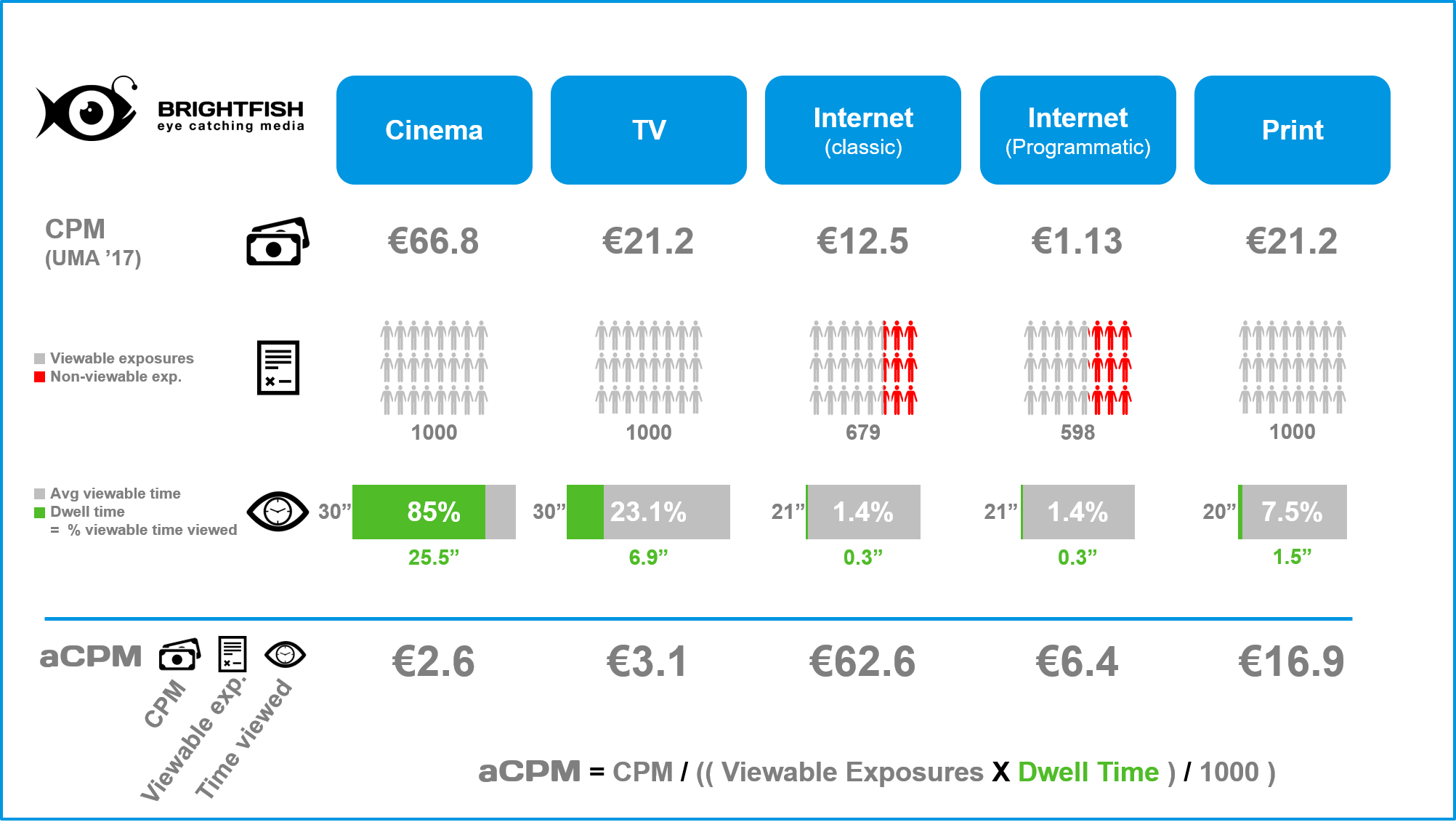 Brightfish, Lumen & Profacts work together in developing one, unified measurement for the ad industry

Brussels, Belgium (June 7, 2018) – Measuring the ‘opportunity to see’ (OTS) of advertisements is a hot topic. Should advertisers pay for ads that consumers never had a realistic chance of seeing? Advertisers want to know exactly what it is they are paying for. However, is ‘viewability’ or ‘visibility’ the right measurement to use?  Should we not instead ask ourselves how many consumers actually see the ad and engage with it? This question was the starting point for Brightfish, Profacts and Lumen. The research challenge: what is the actual reach and ad cost when we take the actual engagement into account?

This is an important question because not all advertisements are perceived equally. Our ability to notice and engage with ads in some media is much larger than with others. We have an intuitive feeling that an ad in the cinema will receive more concentrated attention than a banner ad on a website, even when the OTS of the two ads is the same. We also assume that the quality of this engagement is different, though currently there is no way to quantify these differences.

Therefore, Brightfish commissioned Profacts and Lumen to investigate precisely this issue, making use of eye-tracking technology. This is the first time such research has been conducted on an international level across multiple media. The key question was: what is the likelihood of consumers actually seeing ‘viewable or visible’ advertising across different media including TV, cinema, press and online? The anticipated result? A unified measurement to determine the real impact of media.

The reality of attention

The results of the eye tracking research unveil considerable differences in both the opportunity to view an ad as well as the quality of attention they receive. The first challenge advertisers face is getting people to notice the ads.  Mike Follet, Managing Director at Lumen, said: “A viewable or visible online ad has a 22 per cent chance of being noticed – meaning that consumers had at least one eye fixed on the ad. This also means that 78 per cent of viewable digital advertising is entirely ignored. For example: someone who is in a room with a television has a 64 per cent chance of noticing the ad playing on it.”

However, one view has no impact. Therefore, we also have to consider what the average dwell time is with ads across different media. In this respect, there are major differences between media types. The research shows that a typical viewable online ad is on screen for on average 21 seconds, a print ad 20 seconds and TV and cinema on average 30 seconds.  When someone engages with a digital ad, it is likely this is only done briefly: on average, an online ad only receives our attention for 0.3 of those 21 seconds; print ads score a little better with 1.5 seconds; TV scores 6,9 seconds of the 30 and cinema ads score best with an average dwell time of 25.5 seconds.

Following additional research by Lumen into the relation between eye-tracking scores, memorisation and sales conversion, we also know that there is a direct correlation between those elements. Follet said: “It is safe to conclude that advertisers profit from ads that are looked at longer, rather than those which are looked at more frequent but only glanced at.”

The actual cost of ads

Knowing this, the perception of cost of media changes. Instead of looking at the cost per thousand impressions (CPM), should we not better consider the cost per thousand seconds of attention? Lumen and Brightfish named this measurement ‘the attention CPM’ (aCPM).  Sylvia Van Cauteren, Marketing Director at Brightfish, said: “In each phase of our research, we validated the results with Bernard Cools, the Chief Intelligence Officer at Space, one of the prominent media buying agencies in Belgium. As an external research specialist he offered us impartial and independent views and insights into this study, from the perspective of a media agency.”

“At a CPM level, TV and cinema look expensive when compared to digital. Even when we start taking viewability into consideration, programmatic digital advertising still seems to be significantly cheaper than all other media. However, once you start calculating the actual attention ads of these media types receive, the situation is reversed. On an aCPM basis, the most ‘expensive’ media, cinema, is suddenly is surprisingly affordable. By contrast, ‘inexpensive’ media, such as programmatic digital, are in fact fairly expensive. Traditional online ads are 24 times more expensive than cinema, and even programmatic ads, which were believed to be untouchable in terms of price, are 2.5 times more expensive. For a thousand ‘contacts’ in cinema you pay £2.28 per second, for TV £2.68 per second and online £54.48 per second.

Calculating the aCPM for different media creates a common currency of attention, allowing media planners to understand what they are really getting from each channel. Agencies often say that they are interested in ‘buying eyeballs’. Up until now, they have had to use ‘opportunity to see’ as a proxy for this. Eye tracking allows us to measure what really matters – qualitative attention and actual engagement.