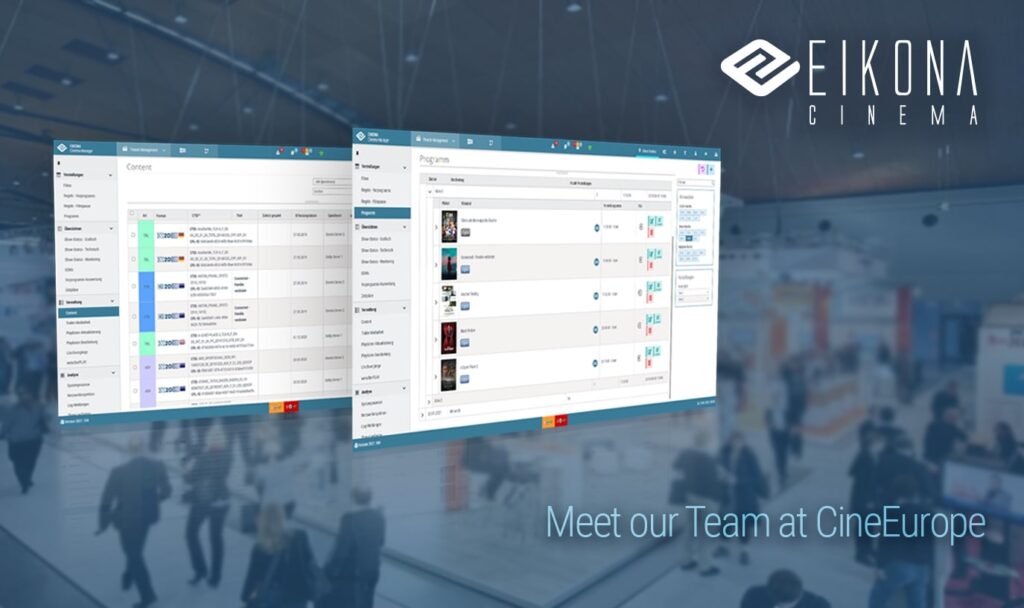 EIKONA Cinema Solutions, the German-based cinema industry software specialist is proud to announce the successful completion of assisting cinemas across Germany, Austria and Switzerland (DACH) restart their operations after the extended shutdown of the industry. With new and higher demands on cinema software and staffing, EIKONA has continued to develop the tools that enable its high profile cinema client base to run their operations efficiently and cost effectively. The company will have a significant presence at this year’s CineEurope as it expands its European footprint to more international territories.

EIKONA has been working closely with its customer partners in all three territories to enable the reopening of their cinemas and overcoming issues related to the prolonged closures and the return of staff and customers to their sites. The EIKONA Cinema Manager suite of solutions, available in German, French and English, is deployed across more than 1,680 screens in 287 cinemas in Germany, Austria and Switzerland. The software is used by Germany’s leading non-affiliated cinema operators, including Cineplex, Germany’s biggest operator with 561 screens, Astor Film Lounge, Filmpalast, Cinecitta and others, as well as leading operators in Switzerland (Blue Cinema, formerly Kitag) and Austria (Diesel Kino).

EIKONA’s Theater Management System (TMS), Digital Signage, Automation & Monitoring and other software family of products has a leading reputation for reliability, flexibility and response to customer needs. EIKONA Cinema Manager software allows its cinema partners to manage, control and automate all relevant areas of their cinemas from one software interface, by seamlessly integrating all modules into one powerful software, to create synergies between all areas of cinema operations.

“Reopening cinemas after as much as eight months of closures has been a challenge for all operators,” said Joachim Schmitt, CEO of EIKONA Cinema. “We have been working closely with all of our partners to bring their cinemas back on line with minimal disruption and best use of staff and resources.” He added that, “overall the experience has been a good one and we are currently looking at how we enhance the solution further to fit the new requirements our cinema colleagues are facing.”

The task of reopening so many cinemas in such a short period of time was made easier because EIKONA’s software offers broad support for all major brands of screen servers, projectors, immersive cinema and POS Systems in use throughout Europe. It also has several industry firsts to its name, such as being the first in Germany to integrate with the Samsung Onyx Cinema LED screen, as well as integrating and operating with Weischer.play, IMAX, 4DX, ScreenX and other third-party systems. Through its standardized process chain it allows synergies between the various work areas and seamless and loss-free processing of all generated data.

EIKONA is bringing its full suite of solutions to Barcelona for the first CineEurope since the start of the COVID pandemic. EIKONA’s highly regarded TMS is currently in its third generation and the company has added new modules to their product range every two years.

“Having built a solid reputation for unbeatable quality and reliability as well as a highly responsive after-sales support our DACH home markets, we are now looking to offer these tools and services further internationally,” says Andreas Stier, Sales Director of EIKONA Cinema , “which is why we will be talking to a wide variety of cinema chains at CineEurope.”

EIKONA now offers Digital Signage, Automation & Monitoring, a Circuit Control System for cinema chains and a Scheduling & Billing tool. These are constantly being improved based on their client’s feedback and boast strong operational reliability. Its Circuit Control caters in particular to the needs of big cinema chains that need to be able to operate all cinemas in different countries from their headquarters, requiring monitoring of and reports from all sites.

Celebrating 10 years in the industry next year, EIKONA Cinema Solutions was spun out of its parent company to so that it could focus entirely on the needs of the theatrical exhibition market, while still being able to take advantage of the back-end software excellence that has led the EIKONA Group to have an unrivalled client base and reputation for the past two decades.

EIKONA Cinema Solutions GmbH was founded in 2012 as a spin-off of the EIKONA Group, with customers in Germany, Austria and Switzerland. The company develops advanced software for the cinema industry that simplifies and automates operating processes and workflows. EIKONA’s suite of solutions monitors operations, increases operational reliability and provides cinema management with modern marketing tools for the screen and the foyer.

To set up a meeting at CineEurope: