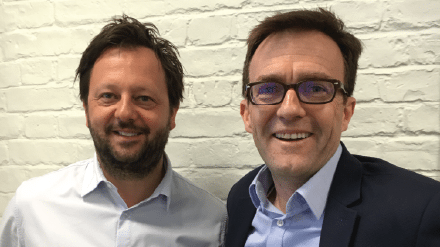 Tony Chambers, Head of Studio Sales and Distribution, and Lee Jury, Head of Studio Marketing of The Walt Disney Company, Europe, Middle East and Africa (EMEA), have been named as the 2016 recipients of the “International Distributors of the Year Award” at CineEurope. The award will be presented as part of the CineEurope Awards Ceremony hosted by the Coca-Cola Company on Thursday evening, June 22, at the Centre Convencions Internacional Barcelona (CCIB) in Barcelona, Spain.

“Both Tony Chambers and Lee Jury have set the bar incredibly high since taking over the Sales, Distribution, and Marketing of the EMEA division at the Walt Disney Company,” stated Andrew Sunshine, Vice President of the Film Expo Group. “We are so delighted to have the opportunity to honor Tony and Lee for their accomplishments in leading Disney to a record breaking success at the box office in 2016.”

Chambers and Jury have overseen the successful theatrical release of numerous titles across Europe, including “Star Wars The Force Awakens” – the 3rd highest grossing movie ever released in the Region. Additionally and with their UK/Irish specific responsibilities, they have also enjoyed record-breaking success – delivering over £300m at the box office in 2016, the biggest-ever single box office year recorded by any theatrical distributor in that market.

Chambers joined the company in 1995 and has held a variety of Finance, Business Planning, Sales and Distribution roles for both the Home Entertainment/Theatrical businesses in Germany, Benelux and at an EMEA regional level in London. Prior to his current role, and as Country Manager, Emerging Markets EMEA, he was responsible for all activities of The Walt Disney Company (television, channels, merchandise licensing, retail, studio) across the Middle East, Africa, Turkey, Greece and Israel. Currently, and as Head of Studio Sales and Distribution, EMEA, Chambers oversees the sales and distribution activities of the company’s Theatrical and Home Entertainment businesses across EMEA as well as having direct operational responsibility for these activities in the UK/Ireland. Chambers has overseen the successful distribution of many films across the region including “Finding Dory”, “Frozen”, “Guardians of the Galaxy”, “Inside Out”, “Maleficent”, Marvel’s “The Avengers”, “The Jungle Book”, and “Zootropolis”.

Jury has over 21 years of experience in the industry, successfully launching over 400 movies during that time and now leads a team of 40+ Studio marketing and publicity executives at the company. Jury currently co-leads the Studio division of The Walt Disney Company EMEA and is responsible for the design and implementation of marketing strategies for the Theatrical and Home Entertainment launches of The Walt Disney Company’s Studio Movie content including Disney, Pixar, Marvel and Lucasfilm motion pictures across the region. In addition, Jury has direct operational accountability for these activities in the UK and Ireland.